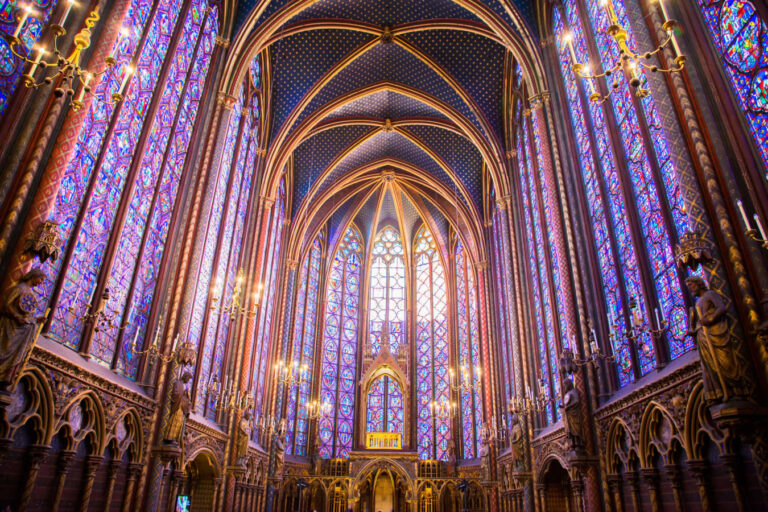 Sainte-Chapelle, chapel of the French monarchs, Paris, France. Photo by Bradley Weber via Flickr (CC BY 2.0).

Still remember the Notre-Dame de Paris? It suffered a horrible fire in April 2019. Notre-Dame is by far France’s most famous church, but it isn’t the country’s only noteworthy one. France is a country full of churches, of all sizes, styles, and time periods. Here are 10 gorgeous French churches that aren’t Notre-Dame de Paris.

They appear in rough chronological order, not in any order of preference. There are so many more that I could have included; I could easily fill dozens of top-ten lists with the churches of France.

1. Basilica of Sainte-Marie-Madeleine, dedicated in 1104

Sainte-Marie-Madeleine de Vézelay is a Romanesque church. That means it is strong and dignified, with thick walls and solid rounded arches. Though not as colorful or heavily decorated as some other churches on this list, it is full of expressive stone carvings around its doorways and on the capitals of its columns. You can see some above. Many surviving French churches are Romanesque, but this is certainly one of the most beautiful. It also has historical significance as the church from which the Second Crusade was called in 1132 CE. Vézelay was a pilgrimage church, which means that many religious people would visit it to see the relics of Mary Magdalene (Marie Madeleine in the French spelling) during long religious journeys called pilgrimages.

Saint-Denis was a monastic church – the rest of the monastery is now gone – that was closely connected with the French monarchy. When the monastery’s leader, Abbot Suger, decided to renovate the church’s choir (the area around and behind the altar) in the 12th century, he essentially invented Gothic architecture. Saint-Denis was the world’s first Gothic structure, and churches like Notre-Dame de Paris followed in its footsteps. The rest of the church was renovated later in a further-developped form of Gothic called “Rayonnant”. But it’s not just the architecture of Saint-Denis that’s significant. The church was also the final resting place of the French monarchs. The church and the crypt below are full of stone sarcophagi and other monuments to centuries of kings, queen, princes, and princesses.

Chartres Cathedral is about an hour away from Paris, and its construction began slightly later than Notre-Dame in Paris. Accordingly, its design builds on the Gothic features of Notre-Dame and makes them even more impressive. Many people consider it to be the most beautiful Gothic church in the world. It’s definitely the best preserved Gothic church in France, which makes it an important site for scholars. Everything about Chartres is exquisite, but it’s probably most famous for its stained glass, particularly gorgeous rose windows like the one shown above.

Amiens and Reims Cathedrals are Chartres’s two closest rivals for the title of Most Beautiful Gothic Church in France. Neither is on this list today, but both are equally spectacular.

Tiny Sainte-Chapelle is truly a church like none other. It was built to be the royal chapel of King (later Saint) Louis IX and his family, as well as to hold his collection of important relics. Such relics – objects pertaining to a person of religious importance – would have been stored in gilt and jeweled reliquaries, and many people have seen Sainte-Chapelle as a building-sized reliquary. I agree with them. In the upper chapel (shown above), almost all of the walls have been replaced with the most beautiful stained glass, and every other surface has been gilt and painted in rich colors. Sainte-Chapelle hasn’t been a consecrated church since the French Revolution, but it is open to visitors. It is truly a gem among French churches.

Strasbourg Cathedral is Gothic, like the previous three churches on this list. What makes it different, however, is that it’s much more of a German Gothic church than a typical French one. This makes sense, because Strasbourg is in the Alsace region, on the France-Germany border. What are the features that make Strasbourg unique in France? Its brownish stone and severely vertical façade are the first things that come to mind. The heavily-carved and painted interior decorations are also atypical of French churches. Strasbourg has a lot of cool stuff inside it, as well. For example, there is a set of colorful religious tapestries handing in the nave as well as an impressive astronomical clock. To top it all off, the cathedral has some pretty spectacular gargoyles and grotesques.

Looking at the picture above, you’ll quickly see Saint-Étienne du Mont’s most notable feature – its rood screen. A rood screen is a divider that separates the altar where priests perform mass from the nave where the faithful gather. Saint-Étienne du Mont’s is made of beautiful and lacy stone carving. It is so elegant and quite unusual. Actually, this church has many other unusual features as well. It’s generally Gothic in design, but it also has classically-inspired features. For example, there are triangular pediments above the doors instead of the usual rounded tympana (like the one shown in the photo of Vézelay). Some of the building’s walls swell and curve in an almost Baroque manner. The result is memorable.

The Church of Saint-Paul and Saint-Louis is a 17th century Jesuit church. I’ve included it because I think its classically-inspired design makes a lovely contrast to all the Gothic French churches we’ve just looked at. It seems like a church we might expect in Rome, not Paris. Although it doesn’t skimp on the decoration, it has a lovely, calm, and rational elegance. There were plenty of similarly-classical French churches built in the 17th century, but I think this one is the most beautiful.

La Madeleine is among the most Neoclassical of all French churches ever. That may be because it wasn’t originally intended to be a church. Napoleon Bonaparte originally commissioned it, and France was officially a non-religious country during his reign. This building, which is based on a surviving Roman temple in France called the Maison Carrée, was intended to be a monument to Napoleon’s troops and their victory at the Battle of Austerlitz in 1805 CE. However, times changed quickly in 19th century France. Napoleon fell from power and Christianity was reinstated before the building was completed. It became a church dedicated to Mary Magdalene, since there was a long history of churches dedicated to her on this site. The interior is much less stark than the exterior, and the decorations both inside and outside include a mixture of secular and religious.

I had never heard of this church before I started researching this article. It’s by far the least famous of the French churches on this list, but it’s definitely the one I’m most excited about. Notre-Dame de la Garde, located in the port city of Marseilles, is Byzantine Revival in style. That means that it follows the architectural tradition of the Eastern Orthodox Church. If you’ve ever seen pictures of the famous Hagia Sophia in Istanbul, you’ll see the connection. This church’s Byzantine features included the bands of colored masonry, repeating domes on the ceiling, and luxurious mosaics. The mosaics are the church’s main form of decoration, and they include religious, secular, and geometric motifs. They also remind me of the decoration in medieval Italian churches.

One of the things that makes Sacré-Coeur so popular is its location. It’s situated on the top of the famous Montmartre hill, so it’s the highest point in the city except for the top of the Eiffel Tower. The views are supposed to be spectacular. Like the church in Marseille, Sacré-Coeur is Byzantine Revival. That’s where those three iconic onion domes come from. It also has sparkling mosaics on the interior, like a good Byzantine-inspired church should. Sacré-Coeur was began in the 1870s as a memorial to French soldiers killed in the Franco-Prussian War. Inside, perpetual prayers are still said for these dead soldiers.

“Churches of Paris”. A View on Cities.