Masterpiece Story: Officer of the Hussars by Kehinde Wiley 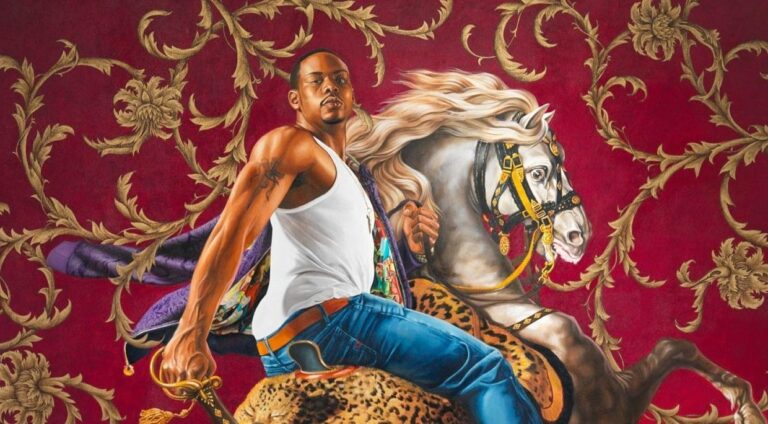 Let’s talk about the Officer of the Hussars by Kehinde Wiley today. Wiley is a Nigerian artist, based in New York, with studios in China and Senegal. He specializes in naturalistic, brightly colored portraits of young Black individuals, often with dramatic flowery backgrounds. With Black masculinity often framed as synonymous with fear and violence in the USA, his generous and vibrant portraits challenge viewers’ preconceptions of their subjects.

The subjects of Wiley’s paintings are usually ordinary people he meets accidentally. The artist often uses Old Masters paintings as inspiration, and Officer of the Hussars is no different. Wiley invites the chosen model into his studio and together they select the classical painting to form the basis of the portrait. The model then replicates the pose from the painting for a photograph.

The classical references are mixed in Wiley’s extraordinary portraits with rich, colorful patterns resembling West African fabrics or Arts and Crafts Movement designs. The fusion of classical references and African American models is a comment on the position of Black people in contemporary American society.

In this case, Théodore Géricault’s The Charging Chasseur is the source. Wiley refrained from using an overly patterned background. Instead, he opted for a magenta sky with gold thistle stalks, inspired by Rococo or Arts and Crafts. This pattern also extends over the purple jacket, that waves from his sitter’s left arm.

What is most interesting though, is how Wiley treats the figure because this changes everything. Géricault’s Chasseur seems to know he is not going to win. His face is determined, he remains a calm professional soldier. We know, however, that he faces his death. His horse reels, probably avoiding an attacker we cannot see in the frame. Chasseur’s sword hand is lowered, hence he looks behind as if he just staved off an attack from that side. Enemies are all around him.

Wiley takes this image and transforms it completely. Here we have the same horse, the same leopard saddle but the rider is very different. A Black man, dressed casually in low-riding jeans and white tank top, wearing Timberland shoes (no, we do not have product placement here) turns back to look directly at us.

His face is full of confidence. He is challenging us to question his place in this setting. His sword hard is also down, but his muscles are tense, ready to point at the enemy at any moment. This is not a man under attack from every side and losing hope. This is a man feeling in the right place, a place he deserves.

Through his art, Wiley purposefully plays with the notion of classical portraiture. Historically having a portrait painted typically meant that the sitter had power. Then through the force of representative tradition, the fact of being a sitter for a portrait also gave power. It’s a closed self-reinforcing circle.

Wiley thus uses it to give power to Black individuals he meets. To give them the place that they have been denied in the art history and museums for so long. He places young African Americans in a tradition that has previously excluded them. To claim what was never given or offered, but what is deserved. He becomes the agent of change, rather than waiting for justice to be done.

The painting hangs in an office throughout the first season of the Empire series produced by Fox. The show focuses on the fictional hip-hop music and entertainment company Empire Entertainment, and the drama among the members of the founders’ family as they fight for control.