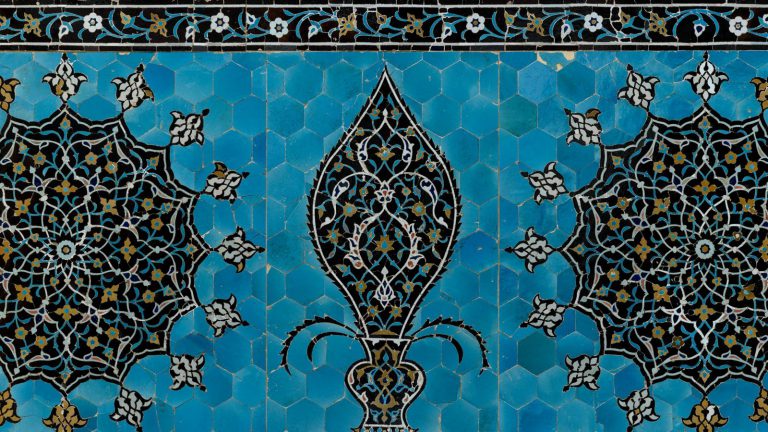 Bright colorful mosaics, stunning arches, amazing constructions in the middle of the desert, beautifully ornate calligraphy, incredible rock crystal goblets, refined metalwork are just a few of the Islamic art wonders that have fascinated for centuries. They are all the embodiment of Muslim beliefs and ideals. Learn more about Islamic art!

After the Prophet Muhammad’s death in 632, art was not a focus of Muslims who were more interested in conquests. Therefore, when the first Islamic building was raised, it became an instant wonder; it was the Dome of the Rock in Jerusalem. The Dome is a place of pilgrimage. It has an octagonal shape, combining the circle as a symbol of the heavens and the square as a symbol of the earth, thus creating a bridge for the believers between the two.

While in Christian churches the walls are painted with biblical stories, in Islam the interior of the mosques, mausoleums, or madrasas are decorated with images of paradise as described in the Quran. Aniconism is the term for avoiding of depictions of any being that is able to perceive or feel. Islamic aniconism stems partly from the prohibition of idolatry and partly from the belief that the creation of living forms is exclusively God’s prerogative. Meanwhile, the word musawwir (maker of forms, artist) is used as an epithet of God. However, the Quran does not explicitly forbid visual representation of any living being. It is the hadith (sayings attributed to the Islamic prophet Muhammad) that explicitly state that creation of images of living beings is as if the painters “breathe life” into their images and this is to be punished. As a result, typical Islamic art displays an absence of any figures and focuses more on calligraphic, geometric, and abstract floral patterns.

The decorations are a vision of paradise. As Islam began in an arid, desert landscape, paradise is a reflection of what these areas lack. Green plants and water cascades are the images of paradise, picturing an oasis in the desert, with palm trees, flowers, fruits, and water.

A magnificent example of Islamic art in architecture is the Nasir ol-Molk mosque, also known as the Pink Mosque in Shiraz, Iran. Extensive colored glass in its façade reflects the light at any time of the day. This type of window is called Orsi glass, which is made of a mixture of wood and colorful glass from the Safavid and the Qajar dynasties. Light is the symbol of divine unity. As it is written in Quran – ″Allah is the light of the heavens and the earth″.

Another very important element of Islamic architecture is the sebil, which is a type of public fountain. Historically sebils were civil or military structures first built in the Ottoman Empire. They were placed in mosques or at crossroads, providing free drinking water to everyone. Some of the most beautiful ones are in southern Spain and in Morocco.

Calligraphy is another very important element in Islamic art. It was used to adorn mosques with the words of the Prophet, or to write the most amazing Quranic manuscripts. One such example is the Blue Quran that has silver and gold verse on indigo vellum, a parchment made from calfskin.

Another wonderful example of calligraphy is the Tughra of Suleyman the Magnificent. A tughra is an intricate and highly decorated symbol that was used as the imperial monogram. Suleyman’s was illuminated in gold and blue and was often used for official documents.

According to the Quran, when the chosen ones will arrive in paradise they will be given drinks served in goblets of crystal. The art of carving rock crystal (a type of quartz) was first developed in Egypt. This is also where this artform reached perfection. Although they look like glass, they are actually rock crystal that has been hollowed out, delicately carved, and polished, reaching only a couple of millimeters in thickness. These magical objects were meant to transport the drinks to paradise and subsequently they were adorned with fruits, flowers, beautiful birds.

And among them will be circulated vessels of silver and glasses of crystal, – crystal- clear, made of silver which they will determine the measure thereof (according to their wishes). They will be given a cup in which a mixture of Zanjabeet (ginger) from a fountain called Salsabeel. Around them, youths of perpetual (freshness) will serve. If you see them, you will think they are scattered pearls. When you look there (Jannah), you will see the bliss and a magnificent realm. Upon them (people of Jannah) will be green garments of fine silk and heavy brocade. They will
be adorned with bracelets of silver, and their Lord will give them a pure drink. ‘Verily this is a reward for you and your endeavor has been appreciated.

In the early 9th century, Khwarizmi wrote the earliest written document on geometry in the history of Islamic science. While geometric ornamentation may have reached a pinnacle in the Islamic world, the sources for both the shapes and the intricate patterns already existed in late antiquity among the Greeks, Romans, and Sasanians in Iran.

One of the most remarkable figures in Islamic geometry and science was Ḥasan Ibn al-Haytham, commonly known as Alhazen (c. 965 – c. 1040). He was strongly influenced by Aristotle. Amongst all his work, the Book of Optics stands out. Alhazen was the first to explain how vision occurs when light reflects off an object and then passes into the eye. Furthermore, he was the first to demonstrate that vision occurs in the brain rather than in the eye itself. A Latin translation of the Kitab al-Manazir (Book of Optics) was probably made in the late 12th or early 13th century. It is said that this translation greatly influenced a number of scholars in Christian Europe, including Roger Bacon, Leonardo da Vinci, Galileo Galilei, René Descartes, and Johannes Kepler.

In his Treatise on Place, a more philosophical work, Alhazen disagreed with Aristotle‘s view that nature despises a void. He used geometry in an attempt to demonstrate that place is the imagined three-dimensional void between the inner surfaces of a containing body.

The artistry and excellency of geometrical patterns required the use of special tools. Some of these were also used for the study of the vault of heaven.

Did you know that 90% of the brightest stars on the sky have Arabic names? Islamic science was investigating the heavens with utmost accuracy. An astrolabe is a tool for navigation, but it was also used to indicate the direction of Mecca for Muslims to perform their daily prayers. Furthermore, it helped them to determine the time when they should pray. Muslims in Islamic Spain and North Africa made the most advanced kinds of astrolabes.

Last but not least, carpets, a very important aspect of Islamic art. The art of weaving carpets reaches its peak in 16th century Persia, nowadays Iran. They were the most impressive demonstration of geometric and floral patterns, combined with bewildering colors. However, the example below is quite an atypical one, as zoomorphic patterns were little tolerated in Islamic imagery. Maybe the weaver was not familiar with the story describing how one of Muhammad’s wives bought a carpet with images that caused the Prophet to protest so strongly that the textile was cut into pieces.

Hopefully, this article stirred your interest and you will take advantage of the summer, and with restrictions being lifted in many countries, you will go to see some of these wonders in person.