Notre-Dame Is Burning Down 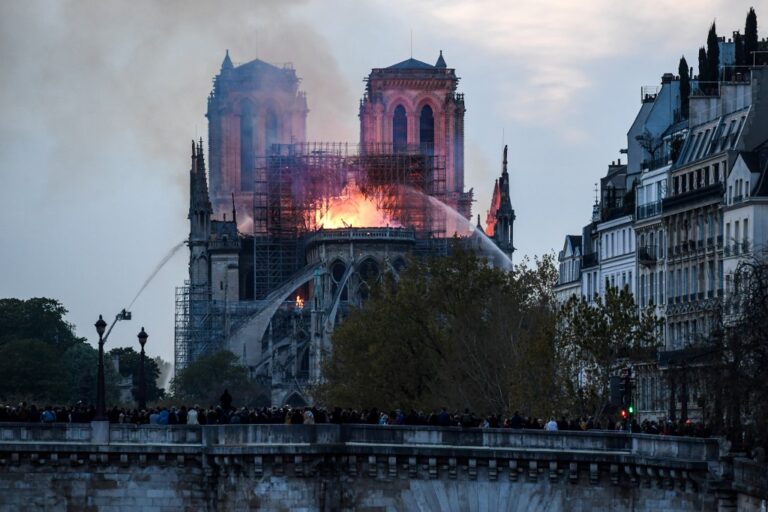 Firefighters douse flames and smoke billowing from the roof at Notre-Dame Cathedral in Paris on April 15, 2019. Bertrand GUAY / AFP

The world has received the very sad news that Paris’s famous Notre-Dame cathedral is burning down. Sometime on April 15, 2019, during renovations to the church, the roof and spire caught fire, which spread quickly. At the time of writing this, I really don’t know what’s going to happen – whether the building is going to survive at all, and if so in what condition. I’m really heartbroken, and I’m so grateful that I had the chance to visit this icon of Gothic architecture back in 2011.

Notre-Dame de Paris (to distinguish it from all the other legions of French churches named Notre Dame in honor of the Virgin Mary) is one of the earliest Gothic churches. It was built beginning in 1163, but it wasn’t finished until the 14th century. It has all the major hallmarks of Gothic architecture, including groin vaults, pointed arches, loads of beautiful stained glass, and gargoyles. It never reached the dizzying heights of later Gothic churches like Reims, but it is still a beautiful and awe-inspiring place that means so much to the people of France and the rest of the world, too.

Notre-Dame de Paris famous all across the world, and it’s a familiar icon of both France and the Middle Ages. According to one of the news articles I read about the fire, it has been Paris’s biggest tourists attraction, even surpassing the Eiffel Tower. Its rise to fame really began in the 19th century, when it featured in Victor Hugo’s celebrated novel Notre-Dame de Paris.

It might be comforting for some readers to learn that the cathedral has survived damage before. It suffered during the French Revolution, when many of its statues and stained glass windows were destroyed because of their connection to religion and the monarchy. It also experienced years of neglect and decay after the Middle Ages, when Gothic buildings fell out of style and were largely ignored. It was in bad shape until the 19th century, when the great Gothic Revivalist Eugene Viollet-le-Duc restored the building extensively. If you have ever visited the church or seen photos of it, you may be surprised to learn that it has been reconstructed quite extensively in places. I just hope that it will be possible to reconstruct it again.

With a heavy heart,

Drone shot of #NotreDame taken by the French Police. This is much worse than it looks from the ground. Heartbreaking. pic.twitter.com/kWTNOUfTMS