The Explosive Life and Death of Carel Fabritius 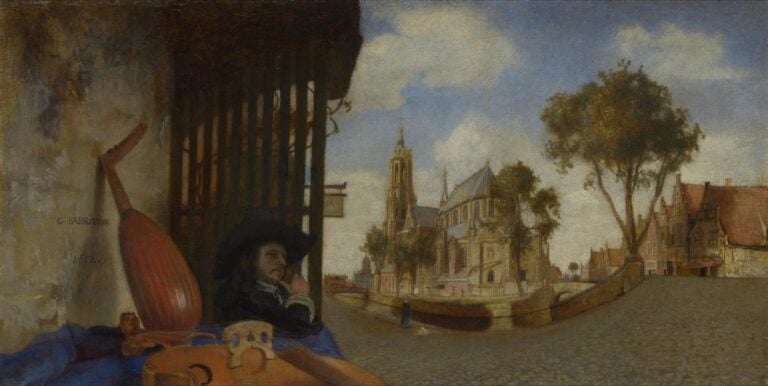 There is very little known about the life of Carel Fabritius. The scholars didn’t really get a chance to delve into archival materials about him because there is barely any. Same with paintings, there are around solely circa 26 works in total left. Why? Because of a biiiiiiiiiiiig explosion.

Looks familiar to anyone? Pretty Rembrantesque, isn’t it? Well, if you guessed so, you get a star point because Carel was one of many pupils of Rembrandt. On this painting he is 23 and a promising prodigy with a developing personal style (of all Rembrandt’s pupils, he was the only one: e.g. usually Rembrandt’s portrait backgrounds were dark and unspecified, Fabritius in contrast, painted his subjects against light-coloured and often textured backgrounds, as you can see in the portrait of  a silk merchant below).

Fabritius also moved away from the typically Renaissance stress on iconography, and instead paid more attention to formal aspects of his painting. He became increasingly interested in the technical aspects like color harmonies, light, or perspective and made various experiments, as you can see from the cover painting, A View of Delft with a Musical Instrument Seller’s Stall, 1652 from the National Gallery in London. He was described by his contemporaries:

Carel Fabricius, a very excellent and outstanding painter was so
quick and sure in matters of perspective as well as naturalistic coloring
and laying on his paint that (in the judgment of many connoisseurs)
no one has yet equaled him

Fabritius was part of the generation of Dutch painters which nowadays is known as Delft School. He moved there in the early 1650s, having studied at Rembrandt’s studio in Amsterdam, along with his brother Barent, in the early 1640s (three of Carel’s brothers were painters too, and so was his father). In 1652 he officially joined the Delft painters’ guild.

Everything seemed to be going well, Fabritius remarried after his first wife died early, he managed to establish a circle of donors, had his own studio in Delft and even a pupil. However, on October 12, 1654, when Fabritius was 32, a gunpowder magazine in Delft exploded. The explosion, referred to by the Delftians as Thunderclap was so huge that it killed over a hundred people, wounded thousands and destroyed a quarter of the city!!! (including Fabritius’ studio and many of his paintings). Who knows how his career would have developed, especially that his impressionistic brushstrokes and renderings of light might have influenced Johannes Vermeer and Pieter de Hooch.

PS. If you are intrigued by the painting of a goldfinch, you’re not the only ones. I recommend a fascinating read “The Goldfinch” by Donna Tartt, whose protagonist Theo steals this painting fascinated by the slide of transubstantiation where the paint is paint but also feather and bone.