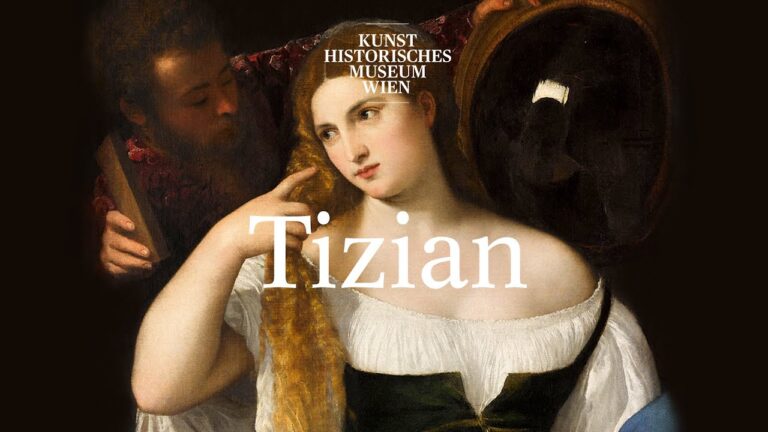 The Titian’s Vision of Women. Beauty–Love–Poetry exhibition is a major highlight of Kunsthistorisches Museum in Vienna that runs from 5 October 2021 until 16 January 2022. The exhibition focuses on portrayals of women produced by Titian and his contemporaries, explains how the Venetian imagery of the “Belle Donne” originated and how it further influenced European art.

The show presents masterpieces by Titian, Palma Vecchio, Lorenzo Lotto, Paris Bordone, Jacopo Tintoretto, and Paolo Veronese – all of them belonged to the Venetian school of painting, which in the 16th century was a thriving and influential artistic environment that greatly informed the subsequent development of European painting.

In this article I will present a selection of most interesting stories and aspects from the show, but I highly encourage you to visit the exhibition in person whenever you will have time and chance to visit Vienna.

The show is narrated through sections divided by iconographical categories, such as ‘Le Belle Veneziane’ as seen below. This particular genre emerged in the early 16th century and features half-length depictions of women inspired by contemporary love poetry and literature. These idealized “portraits” were somewhat close to realistic portraiture, earlier identified as images of courtesans, but recently agreed to depict poetic depictions of brides and newlyweds.

Does it look familiar? Yes, mirrors were a versatile iconographical tool for Renaissance artists, who used it in their compositions to tell a story not only of the mythological Narcissus, but also to express the artist’s prowess in depicting additional perspectives and to play a role in the dispute (paragone) over the merits of painting and sculpture.

It is thought that Giovanni Bellini executed this painting as a form of competition with Titian, who also painted a young woman with a mirror around the same time. Bellini invites us viewers to observe this young woman in a private and intimate setting. She is sitting on a bench, almost fully naked, gazing into her reflection in the mirror. Her hair is gathered in an elegant hair snood decorated with pearls, which indicates that this young, almost statuesque, woman is newly wed, as it was customary for married women to wear their hair up.

The Embodiment of Virtue

In the 16th century, female figures appeared often in Venetian painting as embodiments of virtue, chastity, and humility, expressed by their beauty – as people believed that a beautiful body symbolized a beautiful mind. Artists were particularly inspired by episodes from the Bible, ancient Roman history, and the lives of the saints. What these female figures had in common? Beauty. And what values they all represented? Courage, self-sacrifice, and determination.

Learn the stories of famous heroines in art by clicking in the gallery. 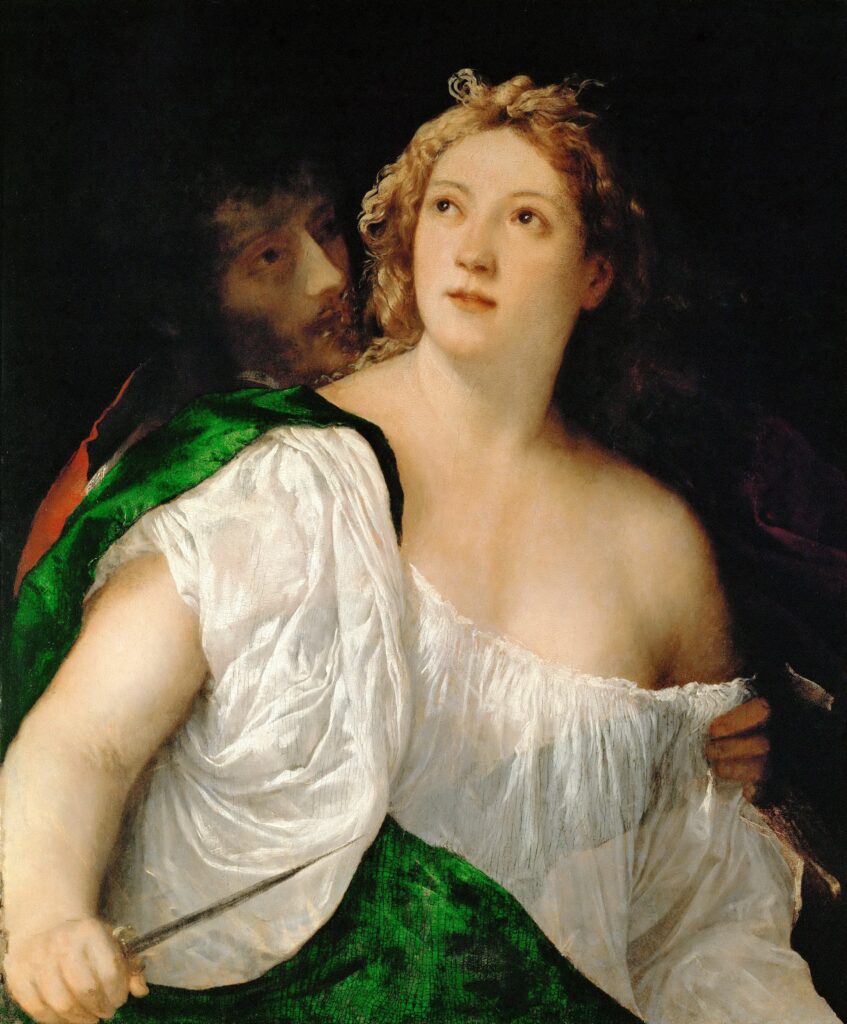 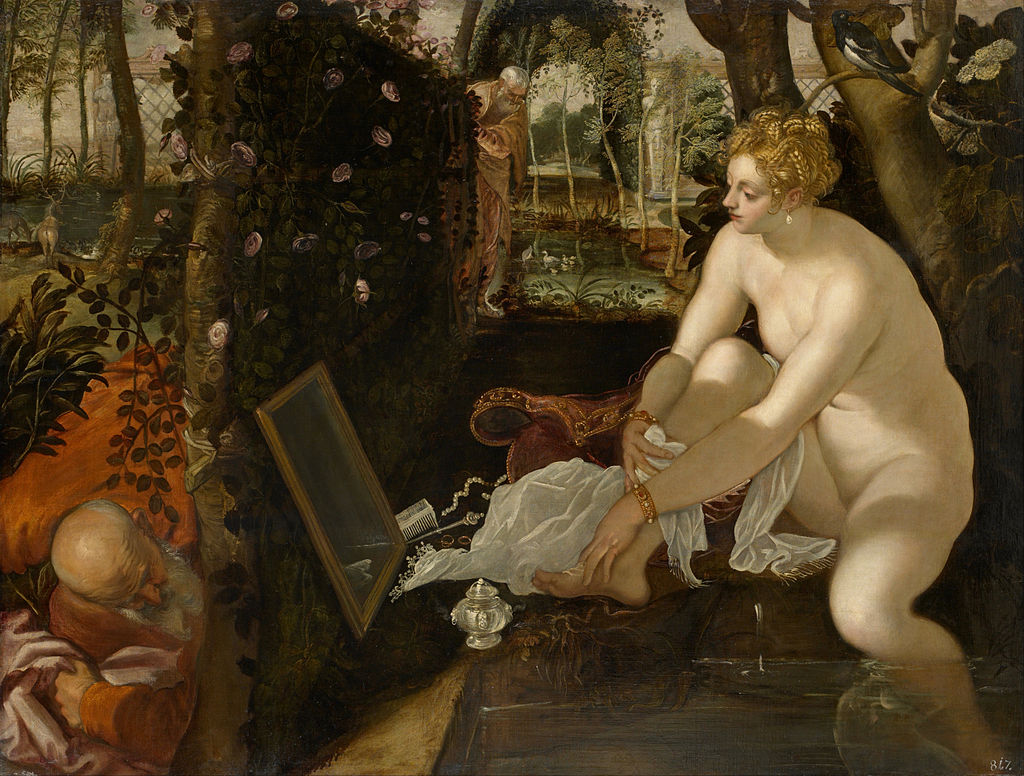 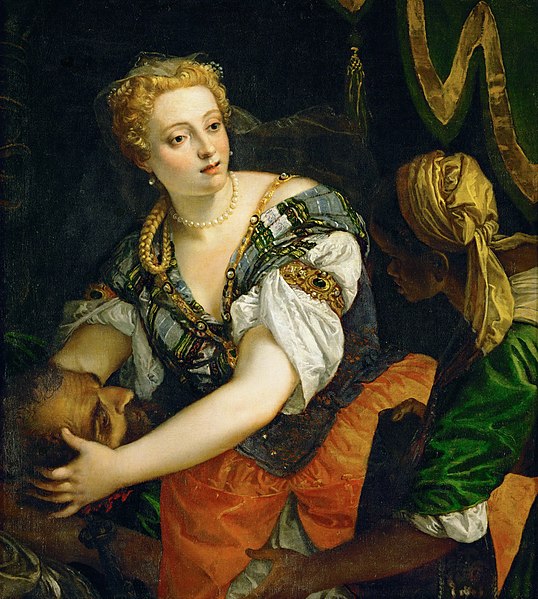 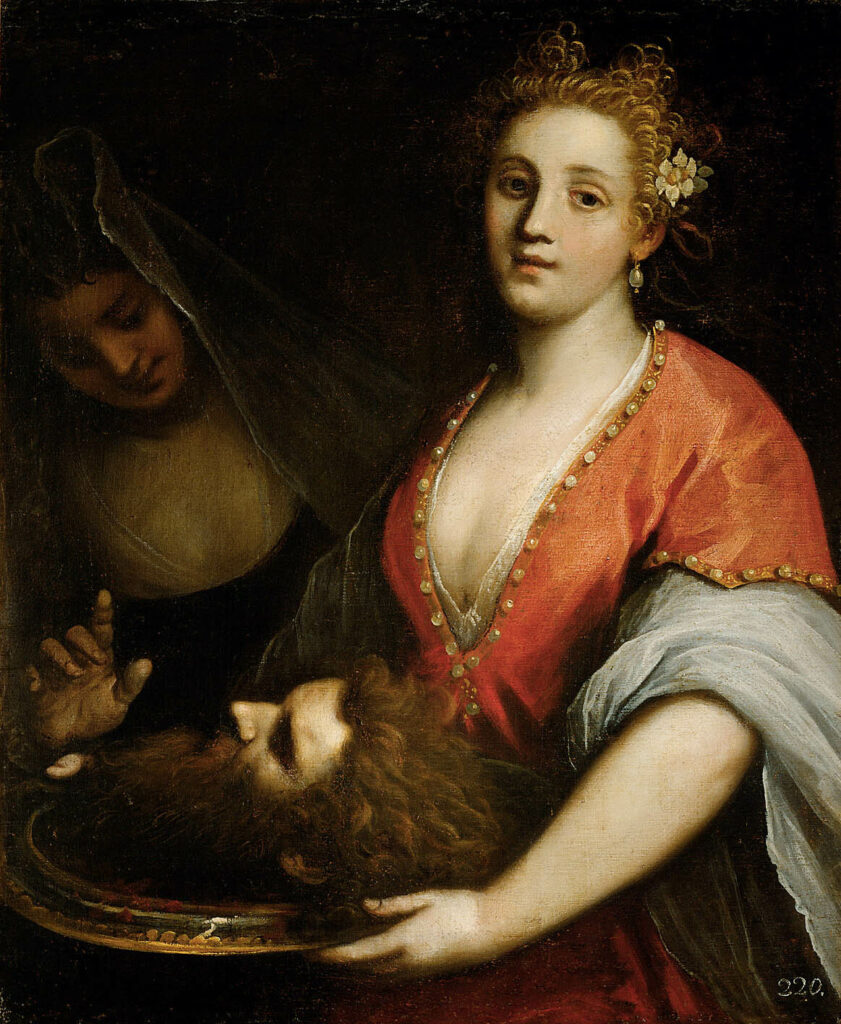 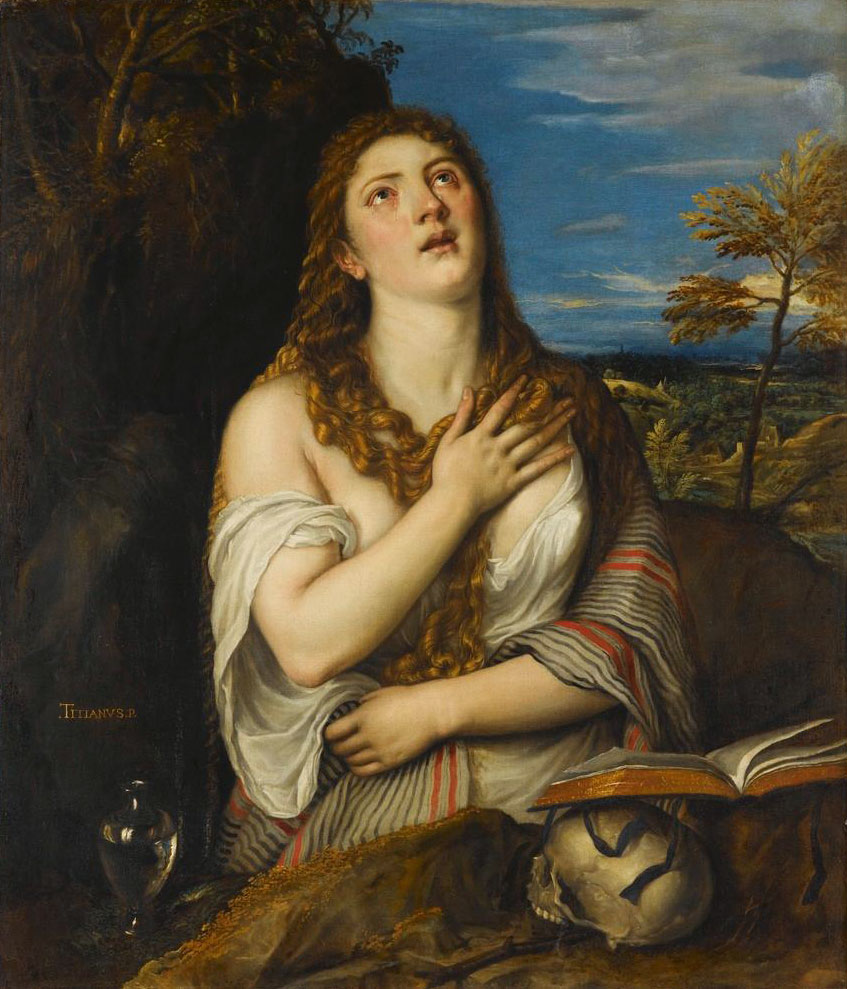 Lucretia was a noblewoman in ancient Rome. She committed suicide after she was raped by Lucius Tarquinius, the son of the last king of Rome, wanting to save both her own and her family’s honor, and for many centuries she was regarded as the personification of virtue. This motif appeared often in early-modern European painting. You can recognize it by a sword held by a young woman pointing it to herself.

Susanna was taking a bath in her garden when two elders accosted and forced her to have sex with them. As judges they had power over life and death. After Susanna refused they accused her of adultery, condemning her to death. Just in time, however, the Prophet Daniel managed to prove her innocence, and the two liars were executed.

Judith is one of the most popular female figures in art history. A beautiful widow, in efforts to save her city, she took decisive action. She seduced the enemy general, Holofernes, and beheaded him while he was asleep. Her figure celebrates courage and determination. Judith’s story was often depicted either in an act of beheading or putting the severed head in the sack. Here the beauty of the heroine is contrasted with the brutality of her action.

Depictions of Judith are very similar to that of Salome, daughter of Herodias. The young woman, manipulated by her mother, performed a sensual dance to her stepfather, King Herod, to force him to agree to John the Baptist’s execution. In art she is depicted as a triumphant, beautiful woman presenting John the Baptist’s head on a plate.

Titian made several versions of this composition based on the first successful painting from 1537. Mary Magdalene is depicted here with her long hair falling on her shoulders and chest. She is gazing ecstatically upwards. According to the legend Mary spent the last 30 years of her life alone as a penitent ascetic in a cave in a desert praying for God’s forgiveness for her sins.

One of the most fascinating and surprising aspects of the exhibit are silhouettes of educated women of Venice who participated in  poetic discourse and along with other erudite female writers published their literary works.

Isotta Nogarola was one of the most important women to participate in the Querelle des femmes (debate on women). She argued in her dialogue On the Equal and Unequal Sin of Eve and Adam (1451) that Adam was the main culprit in the Fall, thus defending Eve.

Jacopo Tintoretto probably depicted in this portrait Veronica Franco, a famous female poet of Venice in the second half of the 16th century. She was a courtesan with many connections to the upper class. In her works she discussed the everyday life of a Venetian courtesan and is known for being a voice for women’s rights.

Titian created a cycle of paintings depicting mythological episodes for the Spanish King Philip II known as poesie. Most of the narratives are inspired by Ovid’s Metamorphoses or the writings of other classical authors. One of the central elements of the poesie is the female body in all aspects and forms.

Titian created these painted poems inspired by ancient and contemporary writers. Titian’s seminal series proved to be highly influential in the Venetian artistic environment, inspiring in later decades and centuries other artists who sought to emulate the master. Poesie came to be so popular that Titian made several versions of the compositions which he then presented to other rulers.

This is a famous painting executed numerous times by Titian. The scene depicts the story of an Argive princess, Danae (and a mother of the hero Perseus), who awaits a sexual encounter with Jupiter who on this occasion has transformed himself into a shower of gold. We can read this painting as a representation of sexuality of a self-confident woman who is desired.

If you’re a Titian fan you will definitely notice that this composition derives from his earlier masterpiece, Venice of Urbino that depicts a similar female nude in an interior.

Titian’s Vision of Women. Beauty–Love–Poetry is a complex exhibition presenting an image and vision of women that developed in 16th century Venice, home of Titian and his contemporaries. The show exhibits both visual and written objects that testify to the intellectual exchange between artists, poets, scholars, and women during that time.

Titian’s Vision of Women. Beauty–Love–Poetry runs at Kunsthistorisches Museum in Vienna until 16 January 2022. Make sure to visit it in person or online!