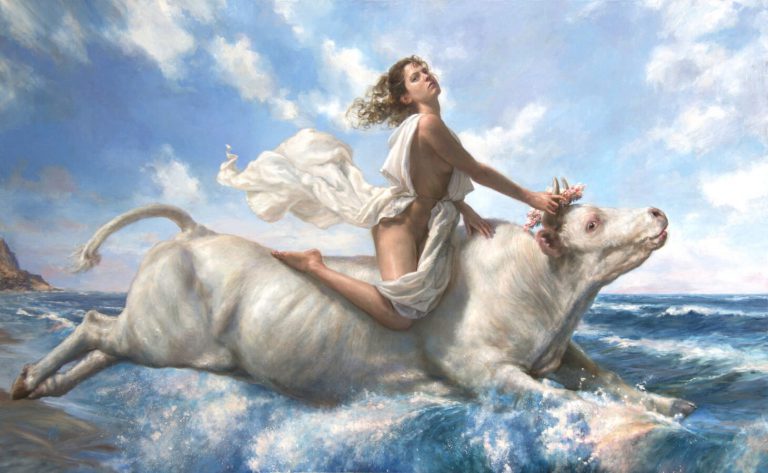 The mesmerizing realm of Greek mythology is one of the greatest sources for artists to exhibit their technical brilliance and unique interpretations. Its influence and weight not only strongly felt in visual arts, but in every other artistic discipline as well. Greek mythology is full of fascinating instances and it continues to be one of the most impactful components of our cultural conscience. Without a doubt, the abduction of Europa, is one of the canonical myths. This article will observe three depictions of the timeless myth of Europa and Zeus, by three different artists and their unique interpretations.

The myth of Europa was retold and rewritten many times throughout antiquity. From Hesiod to Ovid, Asius of Samos to Aeschylus, Ampelius to Diodorus of Sicily, many authors, historians, and playwrights wrote their own versions. They often differ in detail, but the central incident always remains the same.

Europa was a beautiful Phoenician princess who was the daughter of King Agenor or Phoenix and her mother was either Telephassa or Argiope. As all mythology lovers know, if there was one thing that Zeus could not resist, it was beauty. As the myth goes, Europa was lingering on one of the shores of Tyre when, according to the most famous version, Zeus transformed himself into a beautiful bull. In another version, the bull was given to him by his brother, Poseidon. Either way, in Hellenic Polytheism, the gods and what they create are irresistible to the mortal eye. It would not be inaccurate to interpret this phenomenon as an unwritten literary and religious conventionality. Hence, Europa was fascinated with the bull at first sight and when she tried to ride it, she found herself in the Levantine Sea, going towards the island of Crete, Zeus’s birthplace.

The myth of Europa slightly distinguishes itself from other myths about Zeus’s illegitimate love affairs. This difference comes from the three gifts that Zeus gave to Europa, which demonstrates the exceptional care Zeus put into this affair. The first gift was a beautiful necklace. The second was Talos, an enormous man made of bronze, who walked around the island, acting as a protector. Zeus also gifted her with a special spear and a magical dog, Laelaps, who was known for his loyalty.

Burdykin is a Russian artist who was born in 1960. He is known for his architectural and pastoral landscapes as well his mythologically themed works. In this painting, Burdykin was truly able to capture the Phoenician aesthetics by implementing presumptive customary garments and adornments. His choice of color palette is in complete harmony with the topography of both Tyre and the island of Crete. Unlike many of the 19th and 20th century depictions, Burdykin remained accurate when it came to the physical attributes of the people of the region, and portrayed Europa as olive-skinned and dark-haired. By depicting Europa in a very relaxed state, the painter de-emphasized the abduction and glorified the irresistibleness of the divine.

Parkes is an American painter, sculptor, and lithographer who was born in 1944. The artistic essence of his works is greatly influenced by magical realism. He studied graphic art and painting at the University of Kansas. From 1977 onwards, his one-man exhibitions took place all around the world. The most astonishing aspect of this painting is that the bull has an actual human face. This, indeed, is one of the few if not the only Europa painting which has this specific characteristic. With all his godly features, Zeus’s face is difficult to interpret. The sclera is the only part of his eye that is visible to the audience. The placement of his eyelid shows that he is in a calm state. The blush on his cheek may indeed demonstrate his shyness and remorse for his deed. On the other hand, Europa seems thoughtful and is staring at the reflection of the stars. According to Parkes, this is the Pleiades which ultimately represents Europa herself. Lastly, the addition of the swan may symbolize another one of Zeus’s affairs in which he tricked Leda by transforming himself into a swan.

DeCinti was born in 1973 in Santiago, the capital of Chile. He began to study oil painting in his youth. In 1991, he won an Academic Excellence Scholarship, and was accepted into the Faculty of Arts at the University of Chile. Three years later, he came first place in the Arte en Vivo painting competition organized by Librerías Nacional, KLM, and the Royal Dutch Embassy. After acquiring his degree in Plastic Arts in 1996, he became a teacher of painting and drawing at La Academia in Spain. In 2004, together with Chilean artist Oscar Villalón, DeCinti founded the DeCinti Villalón Painting Studio based in Madrid, where he gives painting classes and promotes his works and art in general.

It is clear that this myth holds a special place in DeCinti’s heart as he depicted the same scene five times. All five of the paintings are part of his cycle called The Metamorphoses where he was inspired by the Roman poet Ovid’s magnum opus. In this specific painting, which may be the most impressive, we see Europa not as the one who is being abducted, but as the one who is controlling the whole act, which is contrary to the conventional interpretation. She seems incredibly fierce and confident. As she is riding Zeus or the bull, she comes forward as a character that tricked Zeus with her beauty rather than being tricked. Her dress and hair dance majestically with the wind as she holds the bull’s horn which expresses her dominance while the bull seems desperate.

If you have been fascinated by DeCinti’s painting as much as me, you may check his other spectacular works by visiting his site and his Behance page.