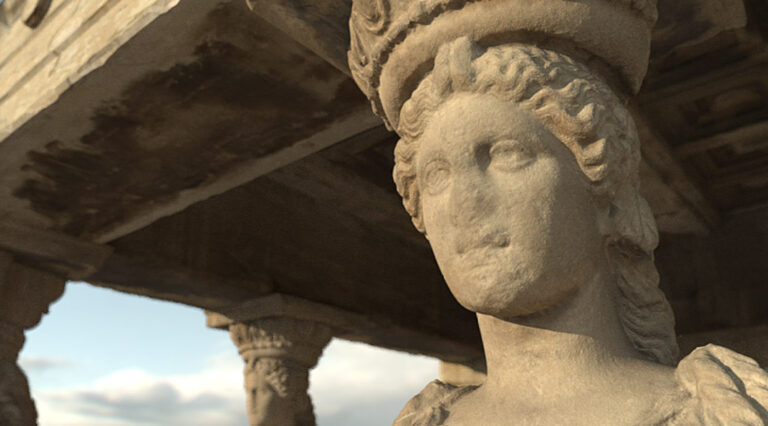 I visited Athens, Greece in the summer of 2016. Naturally a visit to the Acropolis was mandatory, and it was as beautiful and epic as you can imagine. One of the most striking sights was the six Caryatids of the Erechtheion, which were even more hypnotizing and graceful than I had anticipated. As the only visible figures still on the Acropolis, their presence was even more noticeable.

Caryatid is a term used to describe a sculpture of a female figure serving as a column and functioning architectural support. The use of the human form as a decorative or functional part of architecture has been seen in many ancient cultures. This technique is visible all over the world even today, but the ones on the Acropolis are still the most famous and most copied.

Constructed between 421-405 BCE, the six Caryatids adorn the southern porch (also referred to as Porch of the Maidens) of the Erechtheion, and serve as structural and architectural support in place of the typical columns. An unusual and uniquely shaped building, the site was previously that of another temple destroyed in the battle with the Persians. It was made to house an olive wood statue of Athena Polias. Erechtheus was the name of an early King, who judged the gifts from Athena and Poseidon at that site. Unique in shape, structure and location, the Erechtheion’s Ionic architecture provides a lovely contrast to the Doric structure of the Parthenon right next to it. As with all Greek sculpture, they would have been brightly decorated and painted.

The caryatids stand 2,27 meters (7.5 feet) and are made of the best Greek marble, Pentelic. Like early Korai figures of archaic Greece, these women stand tall and straight. Unlike Korai, these are in High Classical style with a graceful contrapposto stance and detailed vertical drapery mimicking the vertical fluting of the Ionic columns. One bent leg and one straight provide visual contrast, and also a sense of stability and strength. They epitomize the idealized notions of harmony, balance and nobility.

Each woman wears the peplos and himation and had a bent leg, but also have very different features and details, especially in the face and hair. They are not just copies of the same figure, there is individuality to each of them. This suggests they were all carved in the same workshop. The arms are unfortunately missing, but Roman copies show them holding vessels of libations or offerings.

It is not known if these are meant to represent specific women or if they are just architectural embellishments. The word Caryatid comes from karyatides meaning maidens of Karyai, an ancient town in the Peloponnese. The women were said to dance with baskets on their heads in honor of Artemis. Their placing also mimics the Panathenaic procession friezes that adorn the neighboring Parthenon.

Not only can the influence of the Caryatids be seen in architecture throughout history, but the intricate hairstyles have also been studied in detail. Most recently Professor Katherine Schwab at Fairfield University in Connecticut, USA copied the various hairstyles on six students in her Caryatid Hairstyling Project. A DVD was also created to allow people to create the styles at home.

A massive laser cleaning was done from 2011-2014 to clear and repair the years of pollution and dirt. State of the art technology was used. The precision lasering was done a centimeter at a time, ensuring the statues were protected and well taken care of.

The six figures remained together and in situ until 1802 when Lord Elgin took one of the figures to display in the British Museum. The remaining five were moved to the Acropolis Museum in 1978 to prevent accruing more environmental damage. Replicas stand in their place today. Numerous attempts have been made to have the figure in the British Museum returned to Greece.

These controversies and the immense care labored on the caryatids shows how powerful these figures are three thousand years after their creation. They are a part of a world history and story that seems to only deepen and further intrigue.

Read also about six ancient Greek sculptures everyone should know!