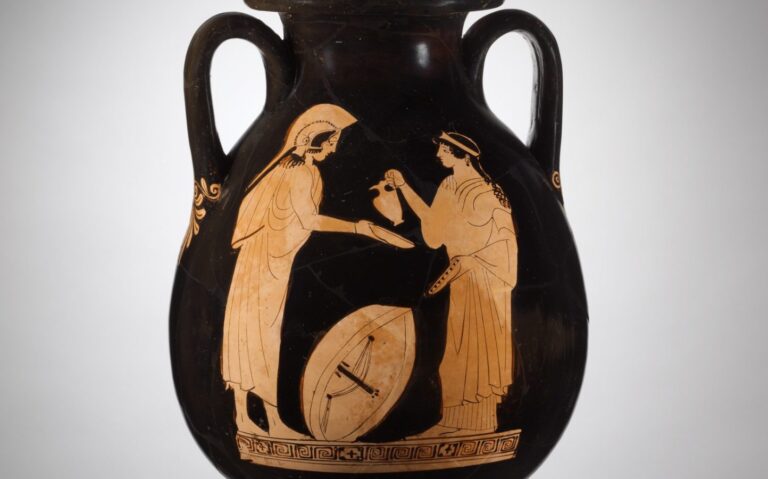 There is a plethora of Ancient Greek pottery pieces to dive into when discussing Ancient Greece and Ancient Greek citizens. Similarly, there is a lot of imagery and depictions of the Greeks in comparison to who they felt did not exist in their closed-off idea of being Greek. Listed below are just a few ways in which we can identify these non-Greeks when viewing Ancient Greek pottery. In many of these pieces, determining things such as ethnicity, occupation, and status are all possible!

To begin with, these are only meant to serve as a jumping off point in your exploration of the Greek identity. They are simply some of the many ways in which we art enthusiasts may be able to tell the difference! Furthermore, not all of these have to be present to equate a non-Greek or Greek! (As you can see, deciphering Ancient Greek pottery is a fun undertaking! Plato and Aristotle had their work cut out for them...but so do we!) 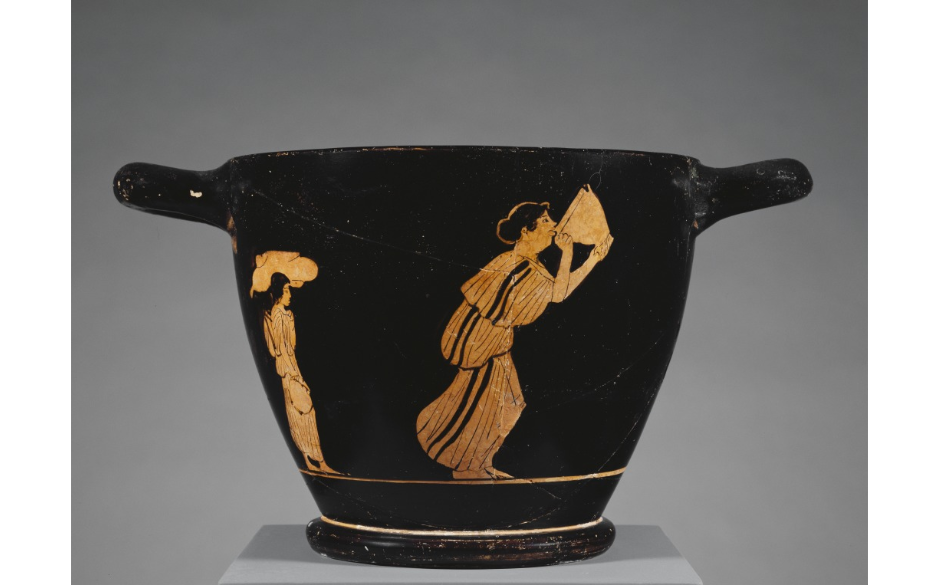 Mistress and Maid, Attic red-figure skyphos, Classical Greek, ca. 450 BC, Malibu, J. Paul Getty Museum, Los Angeles[/caption] Body language is key to deciphering the figures in Ancient Greek pottery, and more widely, art. The body language used can determine the status of a figure, their general disposition, and whether or not they are Greek. The above image depicts two female figures on the side of a skyphos (a two-handled deep wine cup). The larger figure of the mistress depicts the woman drinking greedily from the skyphos in her hands. The maid follows her, with a sack on her shoulders and a pot in her hand. There are a couple of different ways to decipher body language here. The maid or slave girl is trailing so far behind the woman, that she is almost off the side of the narrative, indicating possibly how the mistress viewed her! And the mistress appears in a relaxed state, and able to enjoy herself, further contrasting the sense of Greek freedom and the whole ideology of slavery in ancient Athens (That's a whole other can of worms!). 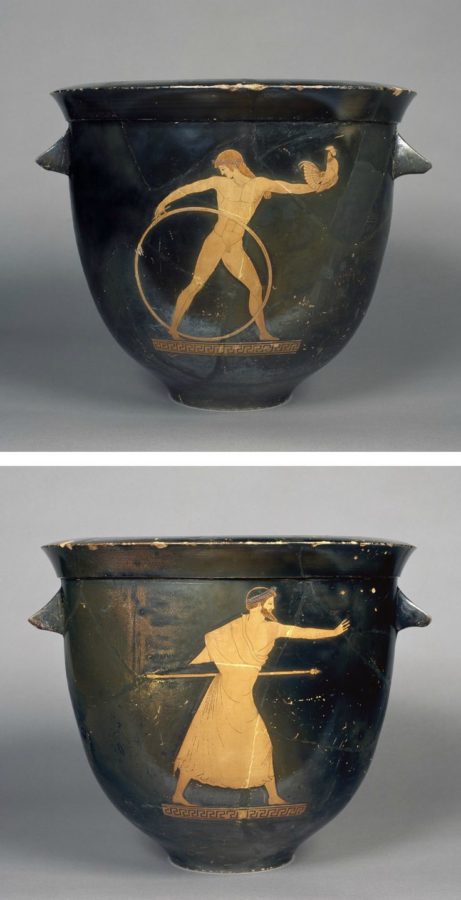 Red-figure bell krater, ca. 500–490 BC, Greek, Attic, attributed to the Berlin Painter, Musée du Louvre, Paris[/caption] The Athenian male form is viewed throughout history as the embodiment of beauty and perfection. It is not surprising then that Greek men are often depicted nude on Ancient Greek pottery.  There are some known cases where the artist depicts male forms as lounging, partaking in drinking and parties...but for the most part, nudity generally equals the ideal. Many of the Greek male figures came to be depicted as nude by the 5th century BC. The use of nudity as a costume, itself, is widespread and could be used to denote hero vs. barbarian, laborer, or even god.  The Greek male was not constantly walking around naked; merely, the Greek nude male was viewed as desirable. (So why not work that angle?) Later interpretations of Classical ideals, such as seen in the sculptures and paintings of the Renaissance, reflect this idealistic male form. Zeus, as depicted on this red-figure bell krater, wears a simple himation. In contrast, the figure of Ganymede (thought of as the most beautiful of mortals) is depicted as nude, as well as playing a game...more so hinting at his youthfulness.  See also the article"Six Ancient Greek Sculptures Everyone Should Know." 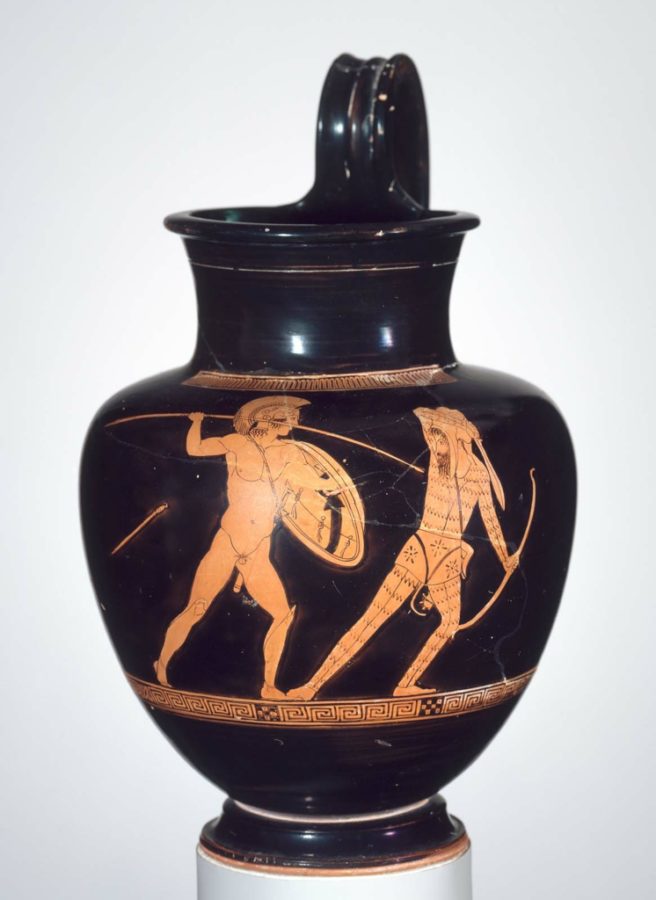 Pitcher (oinochoe) with Greek warrior attacking Persian archer, about 450 BC, attributed to the Chicago Painter, MFA Boston[/caption] The Greeks had a love-hate relationship when it came to the Persians. And considering the famed Persian wars, it is no surprise, that depictions of Persians showed up on the art of pottery during the 5th-6th centuries BC.  It is important to note that more than just clothing separates the Persian and the Greek; But in this case, it is what makes them stand out as Persian to the ancient Greek citizens of this time period. Because the Ancient Greeks considered the Persians to be "barbaric," they, Athenians mainly, did all they could to separate themselves from the persona of the Persians. The Greek soldier, or hoplite, is nude and holds a spear and large shield and wears a crested Attic helmet. In contrast, the Persian is wearing a traditional Persian patterned jacket and pants from his empire. 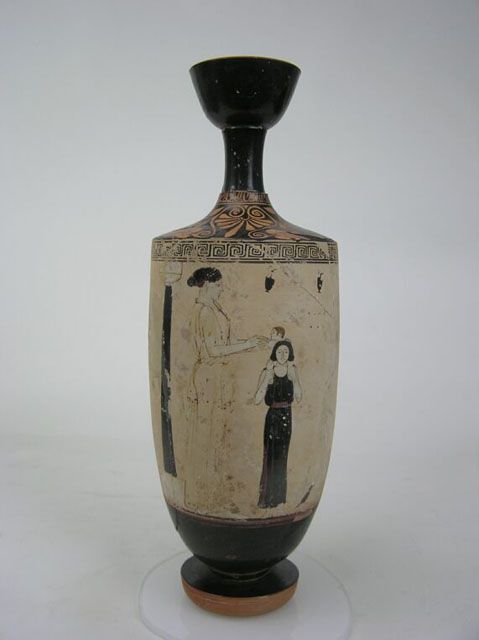 Timocrates Painter, White lekythos-A woman and a maid with a child on her shoulders, from Eretria, about 460 BC, National Archaeological Museum, Athens[/caption] There are many cases in which the audience may not be able to decipher between the Greek and non-Greek figures. In this case, size helps to identity the figures correctly. There are countless examples of this throughout ancient Greek pottery, sculptures, and paintings from the same time period as this white-ground Lekythos. The most prominent figure on the vase is the larger woman to the left of the narrative. The maid and the woman do, however, wear similarly designed chitons, one black, one white. The smaller girl in the narrative, designated as the maid, holds a small child on her shoulders while the child reaches out for the mistress with one hand and keeps one hand on the maid’s head.

I know that this all seems like a lot of information! But the truth is, there is so much more to learn about these pieces of pottery and the Greeks who made them. Be on the lookout for a follow up to this piece in the near future!

In the mid-12th century BCE, the grand palaces and sprawling kingdoms that had defined life in the Mediterranean began to deteriorate. Perhaps...

The idea of timeless beauty is fascinating. Also, it's a great concern for lovers of art history. Conceptions of beauty in Western art history have...