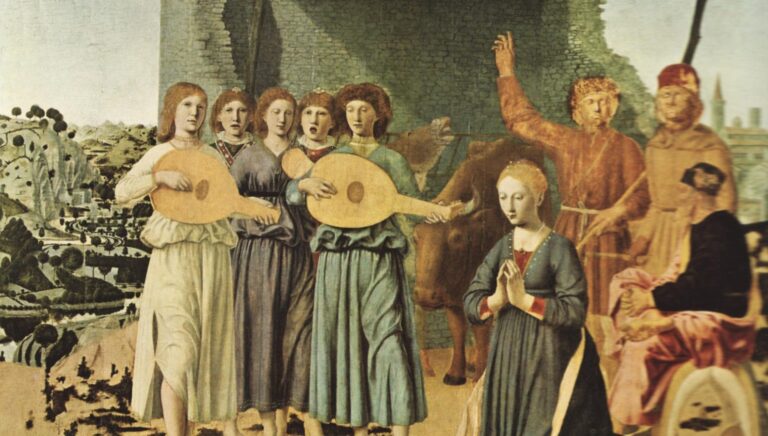 Among Piero della Francesca’s surviving paintings, the last one in chronological order is the Nativity in the National Gallery in London. The missing patches of color, which might almost indicate that the painting is unfinished, are in fact probably the result of overcleaning.

This scene shows a very typical scene – Mary kneeling in adoration before a newly-born Christ who is laid on her cloak. Five angels sing welcoming his birth – two of them play lutes. Beside them a donkey appears to bray, while an Ox peers down solemnly at Christ.

Two shepherds are present (their faces have lost detail, possibly through over-zealous cleaning by previous owners). One of the shepherds points heavenwards, clutching his staff like a sceptre. Joseph is shown in deep contemplation, with his leg crossed over his knee.

Each person, angel and animal shows a different attitude of reverence towards the infant Christ. Even the magpie, well-known in Piero’s native Tuscany for its constant chatter, seems changed and looks to be struck silent.

Piero has added other touches from his native region – Bethlehem itself has a distinctly Tuscan feel. The flat land on top of the hill where they stand evokes Tuscany, as does the winding valley to the left. Meanwhile the skyline on the right, dominated by the basilica, could almost be the outskirts of Piero’s home town Borgo Sansepolcro.

The painting shows the impact of Northern European painting. Piero painted with tempera early in his career, but for later works like this one he began working in oil. The artist must have been clearly inspired by Netherlandish and Flemish works.

Piero has also experimented with perspective. It is the only one of his works that shows a building askew from the rest of the composition: this is the simple shed, which reminds the viewer of Christ’s humble beginnings.

It is possible that this panel was never completed. It has certainly been damaged, possibly by the work of a 19th-century restorer. Nevertheless, the painting holds more than enough detail to give a sense of a complete composition, one which is likely to have been among the last the artist created.