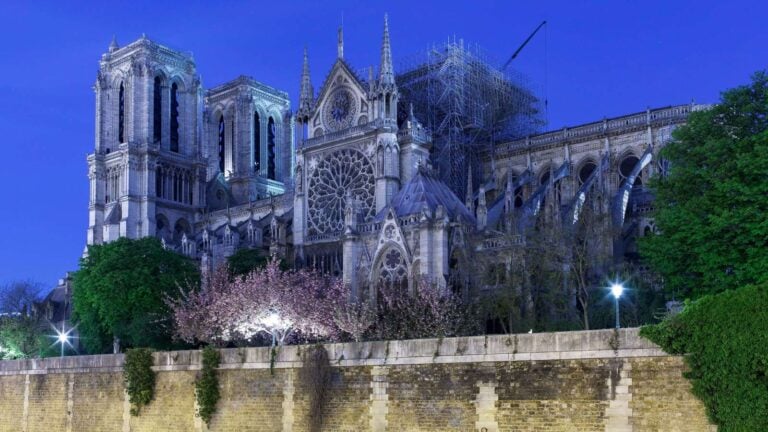 After Monday's fire at Notre-Dame de Paris, I have been looking continuously for news about the building's status. I sorted through all the reports, both the reliable and the sensational, to come up with this summary of Notre-Dame's current condition and the plans for restoration.

What is the building's current condition? 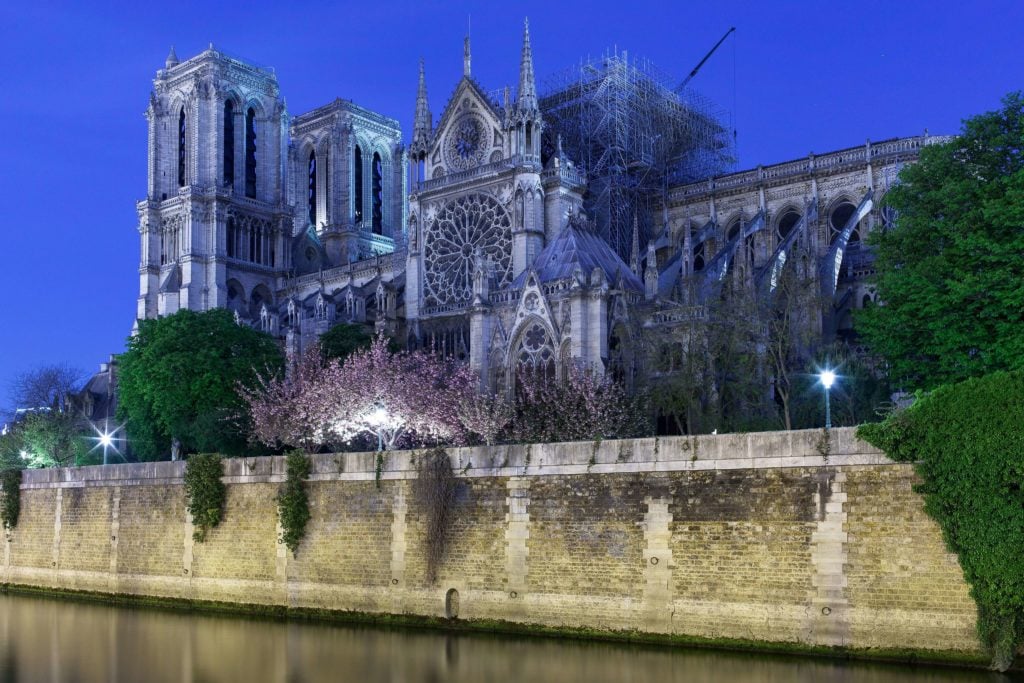 The lead roof was completely destroyed, but the stone vault is largely still there

Notre-Dame de Paris basically had two roofs - a stone vault on the inside, and a peaked roof of lead tiles on the outside. Twelfth and thirteenth-century wooden beams (often called "the forest") in the attic above the vault held up the exterior roof. This attic is where the fire began. The beams burned, and the lead tiles melted, so the roof is almost entirely gone. The stone vault is largely still there. The vault and the buttresses that support it were built to be strong, and they probably prevented the fire from spreading more significantly to the interior. As historian Adam Goodheart observed in the Los Angeles Times, the vault did not collapse despite the weight of the entire roof falling down on it, and it only broke where the several-hundred-ton spire crashed into it from a great height. But even still, the rest of the vault didn't collapse. The medieval masons who built the vault did their job excellently. Goodheart thanks those masons for the building's survival, and I'm inclined to agree.

The spire is gone

Seeing it collapse on live video was a horrifying moment. The spire was the tall, pointed tower over the crossing (the central point where the two arms of the building's cross shape meet the main nave). The spire was the tallest point of Notre-Dame de Paris and a landmark of the Parisian skyline, but it wasn't medieval. The original medieval spire fell into such disrepair that it was eventually removed. The spire destroyed on Monday was a 19th-century replacement made primarily of wood and lead, which is why it burned easily. The spire used to be surrounded by bronze statues. Fortunately, they are safe because they had recently been removed as part of the same restoration project that likely caused the fire.

The rest of the building has been ruled structurally sound, though it is considered fragile

This is such good news. Specialists have warned that some structural issues, like weakening of the mortar holding the stone together, may show up later. Workers will be on the lookout for these issues to stop them from progressing too far, and they have already begun to reinforce areas that are at risk without support from the roof. What's most significant is that the two square towers survived. They have wooden elements that could have caught fire, and the collapse of the towers would have devastated the rest of the structure. According to Parisian firefighters, saving the towers was the key to saving the whole building, and the decision to focus efforts there was a turning point in the fight for Notre-Dame de Paris.

Much of the art has been saved

A brave fire department chaplain and a hundred other firefighters went into the burning building to rescue Christian relics, like the Crown of Thorns, and works of art. The interior of the church fared surprisingly well, though it certainly has some water and smoke damage. A photo taken shortly after the fire and published in newspapers worldwide shows a trio of marble statues (probably too heavy to move under the circumstances) and the altar behind them, sitting just beyond a pile of charred rubble but looking untouched and like they're just waiting for Easter Mass. The Virgin Mary's anguished expression in one sculpture could almost be her reaction to the day's events. Reports say that the cathedral's celebrated organ survived as well. That being said, lots of water and some fire did get inside the church, so the conditions of some artwork and the rest of the interior are still in question.

The three rose windows have survived

Notre-Dame de Paris has a mixture of medieval and 19th-century stained glass. All of it was at risk during the fire, because both the glass and the lead strips holding it together melt pretty easily. Some stained glass was damaged, but it seems that a lot of it was not. Most importantly, the three great rose windows, all original to the building, have survived. One is on the west façade, between the two towers, and the other two are on the north and south transepts.

Other Things to Know 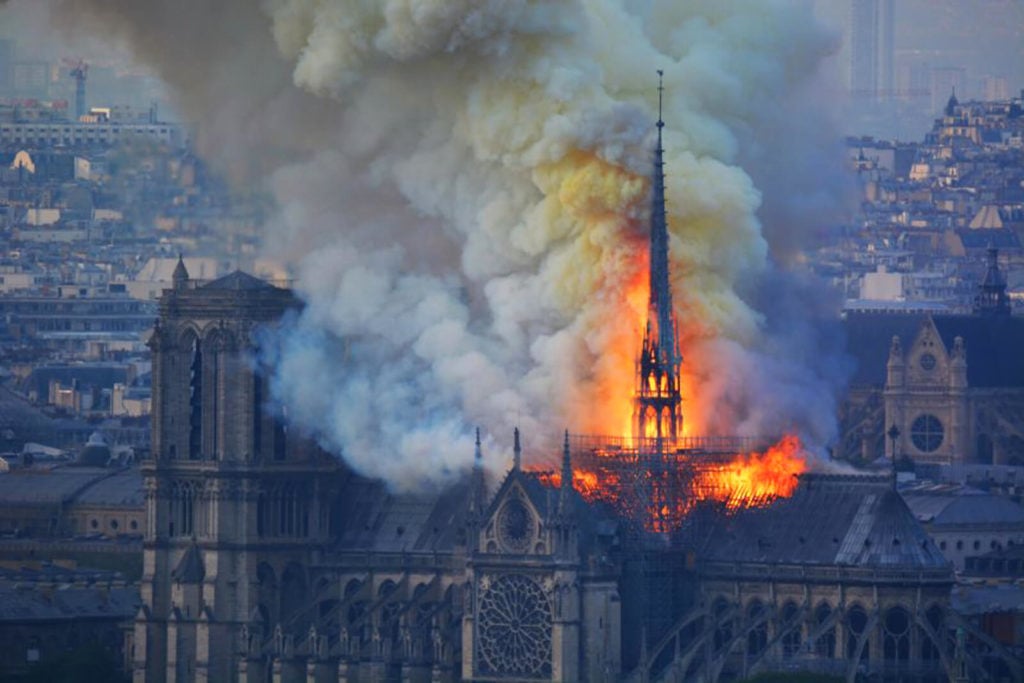 Was this fire inevitable?

The idea has been floating around that Notre-Dame de Paris was a massive fire trap. While the wooden attic wouldn't meet fire code today, I think that statement is still a little unfair. The building is mostly made of stone. Clearly, medieval wood was a high combustion risk. Fire specialists have rightly pointed out the precautionary measures that should have been taken, like fire compartments and sprinklers in the attic. According to the New York Times, Parisian firefighters knew how devastating it would be if the attic caught fire, and they had rehearsed their plan of action to combat it. However, it seems unreasonable to me that people are talking about the building like it was a wooden structure sitting next to an ammunition factory! The whole reason for the use of stone was to prevent fire.

Medieval churches and fires have always gone together

This was definitely on my mind Monday. Early Christian churches were primarily made of wood, and they burned down all the time. Even once people started building them of stone, they still sometimes burned down. That's actually why we have many beautiful Gothic churches today. Chartres Cathedral, another spectacular Gothic structure not too far from Paris, looks the way it does today because of a devastating fire in the 12th century. Most of the building was lost, so the people of Chartres rebuilt it in the then-new Gothic style. Given all these past fires, medieval masons built structures like Notre-Dame and Chartres to be less combustible. Art historian Kevin Murphy pointed out in an interview with Vox that the roof was designed to be separate from the stone vault so that it wouldn't destroy the rest of the building if it burned. Firefighters say that the entire building would have collapsed if they had been unable to stop the fire from reaching the towers, but Murphy's point does pretty well reflect what actually happened. The roof is gone, but the vault survived and seems to have protected the rest of the building.

Notre-Dame has been damaged and restored before, though never this extensively

The building suffered during the French Revolution since it was connected to both religion and monarchy - two things the revolutionaries hated. Among other things, sculptures on the façade were destroyed because they depicted kings, and the bells were melted down to make cannonballs. The building fell into disrepair until the 19th century's Gothic Revival. Then, restorer Eugène Viollet-le-Duc replaced the spire and some of the stained glass, added new stone carvings, and more. Notre-Dame's most famous grotesque was installed during Viollet-le-Duc's restoration. Viollet-le-Duc has been criticized for taking historical liberties with his reconstruction, but his work has been an integral part of Notre-Dame's iconic appearance for well over a century.

How Will They Restore the Building? 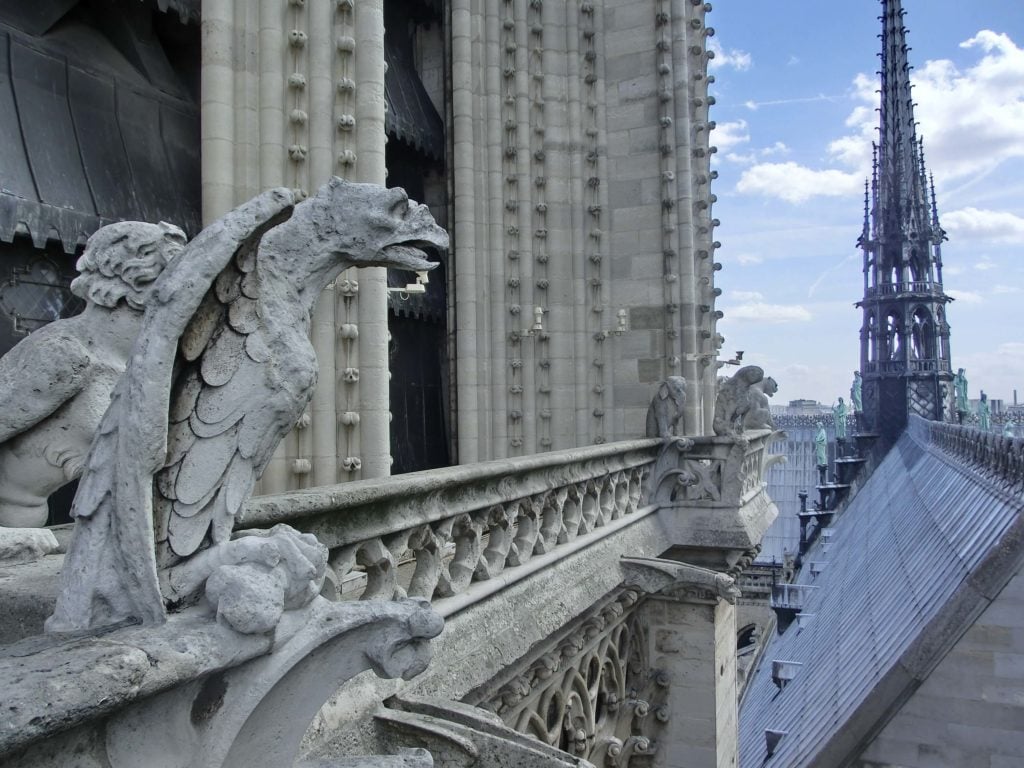 View of some grotesques and the spire of Notre-Dame de Paris from April 2013. Photo by Jurii via Wikimedia Commons (CC BY-SA 4.0).[/caption] Hundreds of millions have already been pledged towards restoring Notre-Dame de Paris, but there are a lot of decisions to be made before work can begin. The French government has announced a contest to design the new spire, but what will it look like? There are several choices: reconstruct the spire like it was before the fire (the way Viollet-le-Duc designed it in the mid-1800s), put it back closer to the medieval original, design a totally new spire, or not replace it at all. There are precedents for all of these choices, but historic preservation standards are always changing. What was done in the past isn't necessarily what's considered best today or in the future. Similar decisions will also have to be made regarding other aspects of restoration. Will the roof be reconstructed the same way it was originally built, or will it use more fire-resistant materials? What additional fire-prevention measures will be included? What will the replacement stained glass look like? Most of the damaged windows were 19th century replacements themselves. Speculation is rampant about how long the restoration will take, but everything will depend on answers to the above questions. The most conservative estimates (of several decades) assume that everything will be reconstructed exactly how it was, using the same techniques and materials that were used in the Middle Ages. As we've just discussed, this isn't a forgone conclusion. French President Emmanuel Macron promises only five years, in time for the 2024 Summer Olympics in Paris. That's probably ambitious to complete the entire project, but maybe it won't be too soon to open the church for services again. Medieval churches often took centuries to build, and people didn't wait until every detail was completed to start using them. Cathedrals were consecrated and started holding services as soon as building has progressed far enough to allow for it. So, even if restoration takes a decade or more, the church may not be closed for that entire time. Keep in mind that Notre-Dame de Paris isn't a dusty relic. It's been an active place of worship for over eight hundred years. In that role, it has been renovated, restored, and updated many times. Even on Monday morning, it wasn't the exact same building it had been when first completed in the 14th century, when revolutionaries briefly turned it into a "Temple of Reason" in the 1790s, or when Viollet-le-Duc completed his restoration in the mid-19th century. As historian Isabelle Backouche observed in The New York Times, the building has a history of adaptation. We love later additions - she particularly noted some of the more charismatic gargoyles and grotesques - just as deeply as we do the oldest elements. In other words, the building has been modified many times before, and we've always embraced it anyway. It's easy to assume that historic structures will always stay exactly the way we know them today, but that's not true. It's probably unreasonable to expect that Notre-Dame de Paris should be put back exactly the way we knew it before this week. I'm just happy that it's still here at all. If medieval masons hadn't done their jobs so well, firefighters from the Pompiers de Paris hadn't been so heroic, or many other things had happened, this might have been a very different article.

If you want to donate money to help restore Notre-Dame de Paris, this is the place given on Notre-Dame's official website.