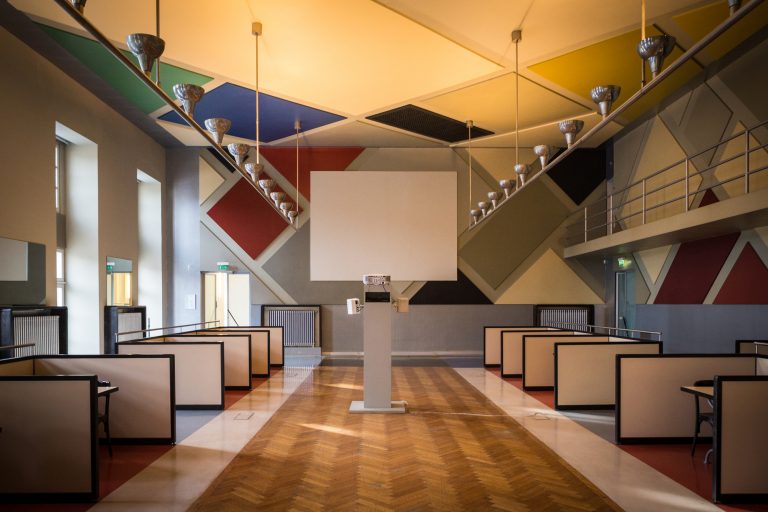 How to Read Piet Mondrian

5 Paintings by Piet Mondrian You Wouldn’t Believe Were His

Have you ever visited Strasbourg in Alsace, France? It’s a charming city full of picturesque narrow and tiny houses scattered along the canals. There are bridges and pretzels everywhere. Yet, among the charming pebbled alleys, one can find a large public square with quite an original building… Discover Aubette designed by Theo van Doesburg.

Originally a 18th century military building (the name “aubette” comes from the daily changing of the guard, which took place at dawn). In 1870 part of the building was ravaged by fire and needed renovation. Its avant-garde history begins in 1922: two brothers, Paul and Andre Horn rented one wing to make it a leisure center, “a public monument of general interest (…) to endow the City of Strasbourg with magnificent function rooms”. The only element of the original building they had to keep intact was the facade, considered a historic monument.

Paul, who was a professional architect, drew up the first plans and subsequently, he invited Jean Arp and Sophie Taeuber-Arp to help him with the project. In 1926, the Arps asked Theo van Doesburg to join. Van Doesburg offered them all his vision of Aubette: it was to become a Neoplasticist Gesamtkunstwerk.

At the outset it occupied four levels (basement, ground floor, mezzanine and first floor) and offered several different leisure spaces: a “Five O’Clock” tea room and Foyer-bar by Sophie Taeuber-Arp, a billiard room, an American bar, a cavern dancehall (all three by Jean Arp), a cafe, a cine-dancing club, and a restaurant by Van Doesburg.

In Aubette, the Neoplastic utopia of making public architecture a total work of art based on geometric principles took shape of a radical intervention based on the use of the geometric grid. Sadly, it turned out too avant-garde for the public. The integrity of the interior was quickly broken by the managers who started adding ornaments in line with the tastes of the time just a few months after the opening in 1928. In 1938, all the original Neoplasticist decor was covered.

The idea of restoring Aubette emerged for the first time in the 1960s. In 1985 the staircase and the cine club were classified as historic monuments and their restoration began. The foyer bar and the function room gained the same classification in 1989 and their restoration was launched in 2004. The restored first floor of Aubette was opened to the public in 2006 and the entry is free to all.