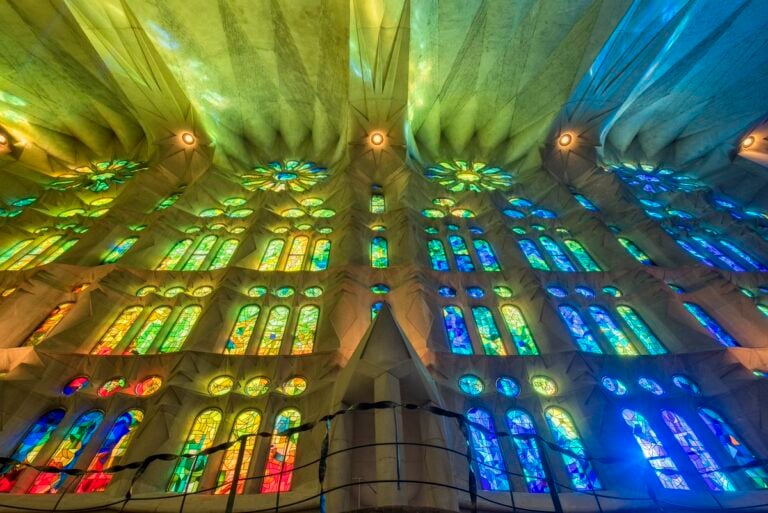 Churches are fascinating buildings where time seems to stand still. Allow us to lead you by the smell of incense into the dark Gothic interiors. Watch out for chimera statues! Here are churches that will make you believe in God!

Sagrada Familia is Antoni Gaudi’s probably most ambitious and stunning design. It’s an enormous basilica covered in metaphorical sculptures, sinuous Art Nouveau-ish lines, Gothic elements, and towers. Although still unfinished, it has become a landmark and a symbol of Barcelona. People love it for its uniqueness and magical atmosphere. Since the construction has not yet been finished, you can contribute to its completion by making a donation.

A cathedral of Paris called “Our Lady of Paris” is a stunning example of medieval French Gothic. It contains a few of the precious Catholic relics like the Crown of Thorns, a fragment of the True Cross, and one of the Holy Nails. Its Gothic dark and mysterious interior, thin and brittle-looking columns, and rosetta windows filled with colourful stained glass, make one feel pretty small and humble – at least in my case they do. The white western façade covered with chimera statues is unique, and it is one of the first churches to use flying buttresses (the external support of the building). Unfortunately, on April 15, 2019, the cathedral burnt down and the entire world watched live as the towers of this architectural gem collapsed. You can read the coverage from the fire here, and some thoughts on the event a year later here.

Sir Christopher Wren accepted the challenge of rebuilding London’s churches after the Great Fire of London of 1666. He designed over 70 churches which were executed in a relatively short time for a church. Wren redesigned St Paul’s Cathedral completely to make it look like St Peter’s Basilica in Rome. The neoclassical grandeur stands out in London’s cityscape and still attracts crowds of visitors.

This church is just a collection of masterpieces which make up a stunning whole. Next to the main cathedral, which is devoted to Saint Mary of Flowers, there is a baptistery of St John that has two stunning sets of doors, one made by Andrea Pisano and the other by Lorenzo Ghiberti. The latter was called the Gates of Paradise by Michelangelo because it is so beautiful. The dome of the Cathedral, designed by Filippo Brunelleschi and completed in 1436, is an ingenious mix of engineering and art. Here you can read more about the entire complex in Florence.

Let us know what your favorite church is!