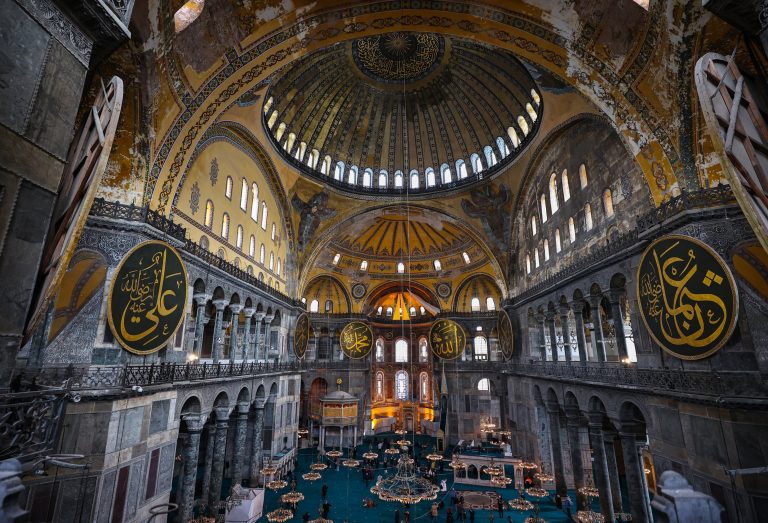 Islamic architecture is well-known for spacious courtyards, colorful wall paintings, and tiles with incredible patterns. The history of many mosques is quite unique. Over the centuries, they have been transformed into churches, cathedrals, or museums. Discover one of the most iconic mosques from all over the world that went through quite adventurous stories. Here is the history of four wonders of Islamic architecture:

The Umayyad Mosque, also known as the Great Mosque of Damascus, is one of the most important religious sites in Islamic tradition. In 661, during the reign of the first Umayyad caliph Mu’awiya Ibn Abi Sufyan, Muslims shared the space where the mosque stands now with Christians. Muslims prayed in the eastern section of the ancient temple structure and the Christians in the western side. This is why, inside, you can see many traces of Christian Byzantine art, like mosaics, and their adaptation to their new role of mosque decorations.

The history of this mosque is very long. Currently, the temple known as the Great Mosque of Cordoba is a cathedral of the Roman Catholic Church. At the very beginning, Mezquita was most probably a Roman temple dedicated to the god Janus. Then it was converted into a church and, eventually, following the conquest of Spain by the Umayyads in 710, changed into a mosque. In the 13th century, a Christian church was built inside the mosque by the emperor Charles V and since then it is again a Christian cathedral. This building is a great example of how different cultures and religions were coexisting through the centuries.

It has one of the most iconic arch designs in Islamic architecture. The hallway of double-tiered red and white arches served as the main prayer room for Muslims. In the original building (before expansions), all the columns came from Roman and Visigothic buildings.

Hagia Sophia also had an adventurous history. At first, it was built as a Byzantine Orthodox church, and it is considered one of the most important landmarks of Byzantine architecture. It was converted into a mosque in 1453 during the Fall of Constantinople to the Ottoman Empire. In 1935, Turkey changed its purpose to a secular museum. However, this didn’t last long as it has been transformed back into a mosque in 2020.

The Sultan Ahmed Mosque in Istanbul is known by the name of Blue Mosque because of the hand-crafted blue tiles which cover its interior walls. At night, the mosque is beautifully lit by blue lights. It was built as a mosque in 1616 and, after 400 years, it’s still in use.

Do you know any other dazzling examples of Islamic architecture, any mosques with a unique history? Let us know in the comment section!