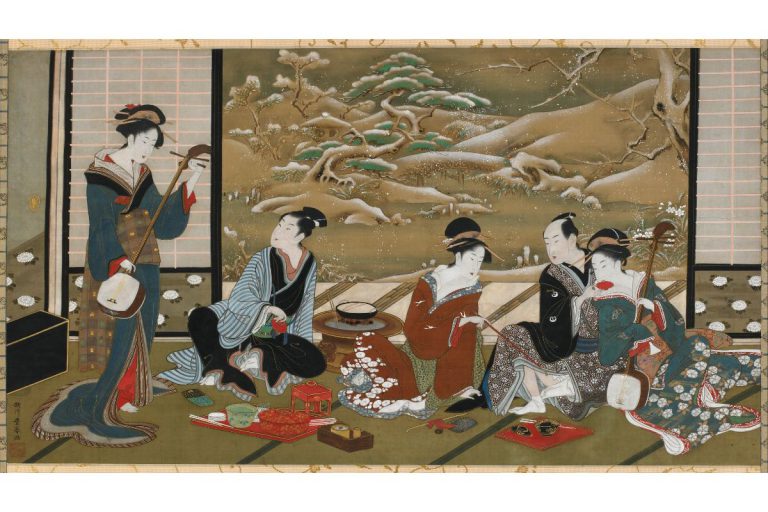 Jun’ichirō Tanizaki (1886-1965) was an important Japanese writer, mainly during the Shōwa period. One of the author’s most important essays is In Praise of Shadows, first published in 1933. It comprises the author’s views on the importance of shadows in Japanese culture.

In his writings, Tanizaki generally analyses the changes taking place in Japan after the country opened to the Western culture in 1868. One such change was the use of perspective in 20th century prints. The introduction of new elements could, in his view, destroy the core values of Japanese culture.

In the author’s view, everything began to change when electric lighting started to become a standard in Japan. After that moment, the role shadow played in interior design, theater, and other art forms diminished considerably.

The essay mixes general analysis with the personal experiences of the author. He didn’t approve of electric light in any area of daily life, especially when used in excess. In a fragment, he recounts how once during the holiday of Moon Festival he gave up plans to go to Ishiyama Temple. The reason was the addition of Western elements to the ceremony – the Moonlight Sonata by Ludwig van Beethoven and… bright spotlights.

Jun’ichirō Tanizaki notices that people traditionally built homes with sloping roofs, so that the interior could be as dim as possible. The interiors always retained a bit of mystery in corners. Believe it or not, in the essay it also notes toilets as a place where shadow is essential!

Darkness could augment the power of details in decorations:

“A golden subdued ray, cast in the surrounding darkness, like the shining horizon line at sunset… I don’t think gold shows its sad beauty in a more splendid way somewhere else.”

Gold was an essential element of Japanese homes and temples, but people in the 20th century have forgotten its value. Before, it also had a practical role, because it acted as a light source. The same applies to the brocade of priestly garments, which seems strident in artificial lighting.

The problem of building houses also touches on the difficulty of incorporating modern standards. Actually, the author considers that it would have been better if the Japanese had developed their own technologies, suitable to their way of living:

“If only we had invented the gramophone or the radio, how exactly would they have rendered the characteristics of our music and our voices! Our music is quiet, mood music, but when amplified by a loudspeaker, much of its magic disappears.”

Another point of the analysis regarding shadows in Japanese culture deals with the changes in Nō and Kabuki theater. The makeup in Kabuki plays seems to come at a disadvantage in modern bright lights. This is partly due to the fact men traditionally play roles of women, therefore the illusion could hold only when the spectators couldn’t see details clearly.

Nō theater still retains, however, a mysterious element because actors wear masks, which renders a sense of timelessness. Its beauty evokes that of everyday life in ancient Japan, which can be perceived now only on stage:

“The dimness of the Nō stage is, actually, the dimness of the homes in old times, and the colors and patterns of costumes are those worn by noblemen and aristocrats, although possibly a bit more sparkling that in times past.”

The plays should take place in old buildings, which retain the magic of traditional interiors, full of shadows:

“The adequate place for Nō plays is a stage with natural luster, whose pillars and screens retain a shadowy shine, where the darkness under the beams hangs over the heads of actors as if an immense temple bell were suspended above them.”

The effects of artificial light could be seen in Japanese homes and temples, but they also affected everyday objects. Lacquered bowls with golden ornaments are an important tradition in Japan, in the art of urushi-e (paintings made using lacquer on objects). During the 20th century, however, more and more people preferred ceramics over them. They started to seem old-fashioned and relevant only for more solemn occasions.

In the view of Jun’ichirō Tanizaki, lacquered bowls were an essential part of Japanese meals, because they reflected vividly the role of shadows in Japanese culture. Eating almost becomes an art:

“The luster of lacquer in darkness reflects the flickers of flames, heralding the passing of breezes through the room and luring the onlooker to fall in a state of reverie.”

“It is often said about Japanese food that it must rather be looked at than eaten, but I would go further and say that it is an occasion for meditation, like a silent music, created by the combination of lacquered objects and candle flames flickering in darkness.”

The same principles also define Japanese paper, which offers a special writing experience. Its colors retain shadow because it is not completely white. Due to its dim nuance, it blends perfectly with Japanese interiors and becomes an aesthetic experience in itself:

“The whiteness of Western paper is different from that of Japanese or Chinese paper. The first reflects the light falling upon it, white our paper absorbs it slowly, like the fine blanket of the first snow.”

The analysis of Japanese aesthetics from this point of view is very beautiful, isn’t it? If you would like to find out more more about light and shadow in Japanese art, you can also check this article about depictions of the moon in Japanese woodblocks.