The Scenes You Might Know from Anime: Outstanding Prints of Hasui Kawase 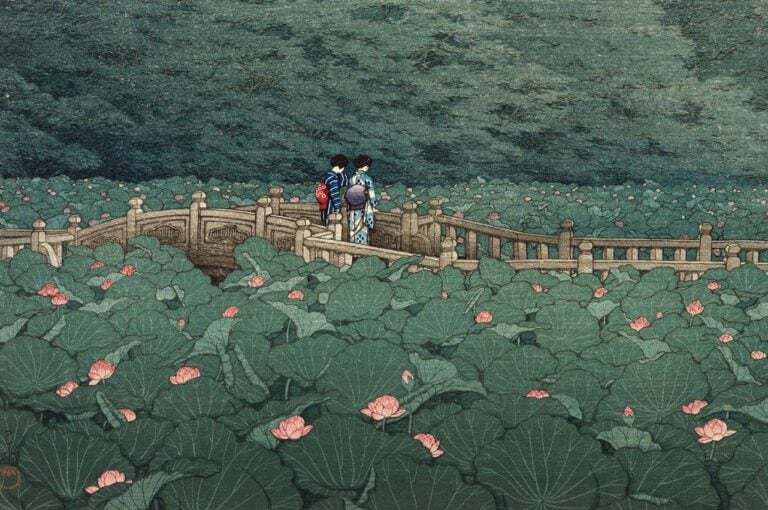 Hasui Kawase (1883-1957) was one of Japan’s most important and prolific printmakers and artists of the late 19th and early-20th centuries. As a prominent designer of the shin-hanga (“new prints”) movement, he depicted traditional subjects with a Western twist to create a unique and colorful style in his prints and watercolors. Having designed around 620 prints in his 40-year career, his beautiful landscapes of Japan speak to both an earlier generation of woodblock-print artists and are reminiscent of scenes in popular anime series and films.

From an early age, Kawase sought to become an artist. Indeed, it seems artistic talent ran in the family as his maternal uncle was Kanagaki Robun (1829-1894) who produced the first manga magazine, as well being as an author and journalist. As a young man, Kawase went to the school of artist Aoyagi Bokusen where he studied by copying the maters’ woodblock prints, in addition to learning the traditional art of brush painting.

Later, he approached acclaimed artist Kiyokata Kaburagi to teach him his style, but instead, was encouraged to study Western-style painting. He was greatly influenced by everyday life and landscapes, having much of his work published in magazines and books in the 19th and early-20th centuries. His most popular prints date from the 1920s onwards when he worked almost exclusively on landscape and townscape prints and watercolors based on various sketches and small watercolor paintings he created during his time traveling Japan.

In the early 20th century, much of Japan went under an extensive amount of urbanization as a result of industrialism. Kawase counteracted this industrial growth in his depictions of a more tranquil and natural Japan, primarily through portraying expansive landscapes and smaller villages. What I find most intriguing in Kawase’s prints is the use of bold and intense colors to present nature at its most beautiful, appearing more like gouache or oil paintings than prints. Furthermore, a few prints, in particular, seem reminiscent of modern-day animes through their use of perspective and in particular, the presentation of nature and man-made structures in harmony with the surrounding landscape.

Onsengadake Seen from Amakusa and My Neighbor Totoro

Onsengadake Seen from Amakusa is an early woodblock print from the height of Kawase’s career. This print comes from his highly successful series called Selected Views of Japan, all created between 1922 and 1926. Typical of his style, the artist depicted a beautiful scene of the Japanese countryside through the use of bold colors and layers of depth.

Fields upon fields of greenery take up most of the composition, with varying tones of green and dirt roads showing the viewer a Japan untouched by the modernization and industrialization of the early 20th century. As the city of Amakusa is made up of small islands, Kawase leaves the viewer on the edge of one of these islands, being able to see the calm blue sea and mountains in the distance that enhance this sense of serenity brought forth in this natural setting. The figure in the distance leaves us wondering; who are they, and how lucky they must feel to bask in such natural beauty.

This countryside scene is mirrored in much of the film My Neighbor Totoro (1988), animated and written by Hayao Miyazaki, the mastermind behind the Oscar-winning Studio Ghibli. This film tells the tale of two sisters moving to the countryside with their father, to be closer to their sick mother who resides in a hospital there. While the young sisters are nervous about their new abode at first, they meet the neighboring forest guardian, Totoro, who teaches them to believe in themselves and protect nature.

This scene, in particular, is from the very beginning of the film, when the Kusakabe family first move to their new house in the countryside. The central road through which the family drives neatly separates the tilled fields from the rice paddies, developing depth through the linear perspective as the road ends somewhere in the distance, past the voluminous tree that serves as a reminder of the power of nature when unaffected by humans. As much of the film revolves around these city girls reconciling with their new town and learning to appreciate nature in literal and fantastical terms, this shot filled with the beauty of nature and sprawling fields encompasses these themes perfectly.

The team at Studio Ghibli has depicted the importance of preserving nature in multiple films, such as in Pom Poko (1994), Princess Mononoke (1997), and Ponyo (2008). Just as this theme concerned Kawase, modern Japanese animators have realized just how well this resonates with a contemporary audience, glued to their phones in the twenty-first century.

Nikko Kaido and Attack on Titan

Another woodblock print that can be compared to a scene from anime is Kawase’s woodblock print entitled Nikko Kaido (1930). The title refers to the Nikko Kaido route, which was one of the five routes coming from the Edo period (1603-1868) that were built to connect Edo (modern-day Tokyo) with the temple-shrine complexes located in the modern-day city of Nikko in the Tochigi Prefecture. It can be compared to the Catholic Stations of the Cross in its role as an ancient religious path to gain greater faith, inner peace, and wisdom as you walk along the path.

Kawase situates the viewer in the middle of this route, watching a lonely traveler continue along the forest path and into the distance. The tall and statuesque trees that line the path create a sense of depth, as the eye is forced into a linear perspective whilst trying to follow the figure on the road. The darkness of the trees and leaves on the road in comparison to the brightness of the trees in the distance highlight the spirituality of undertaking this pilgrimage.

This print, in particular, bears a striking resemblance to a scene in the popular Japanese anime called Attack on Titan, which first began airing in 2013 after it grew in popularity as a manga series. It centers around a dystopian world where humanity has had to build great walls around its cities, as beyond the walls giant humanoid monsters called Titans try to barge their way in and eat the townsfolk. Their only hope is a group called the Scouts, who venture beyond the wall to kill the Titans that plague their people, however, their efforts appear futile against these maneaters.

This scene from Season 2, Episode 9 of the series sees the Scouts leave the comfort of their town to track down Titans in a nearby forest. As shown here from this still, the forest is just as dense with tall trees as Kawase’s woodblock print, even including a path running down the centre. While the print has bolder areas of solid color, due to the nature of printing, this scene also has sharp contrasts between light and dark, such as in the bark of the tree to highlight where the light manages to hit the bark through the leaves and thick branches. Even down to the long roots of the trees that taper out into the path, this scene reflects a striking moment in the series (don’t worry, no spoilers), that is life changing to the characters; just as this spiritual route depicted by Kawase presents a life changing moment in one’s spiritual life.

Overall, it is clear that Hasui Kawase’s style that represents a mix of Eastern and Western influences is remarkably powerful in portraying the beauty of Japan, yet unaffected by the industrialization that would soon see it rise to be one of the world’s major technological giants. Through dense forests and seaside fields, the artist takes us on a journey to rediscover spirituality and tranquillity that lies at the base of our existence. Modern animators have taken this theme and ran with it in creating some of the most popular and memorable anime series and films of our time.

Whether it be to present the wonder of nature after a lifetime spent hiding from monsters behind a wall or to remind the audience of the need to appreciate and protect the environment, anime creators have reinterpreted the style and themes of Kawase’s woodblock prints for our time.