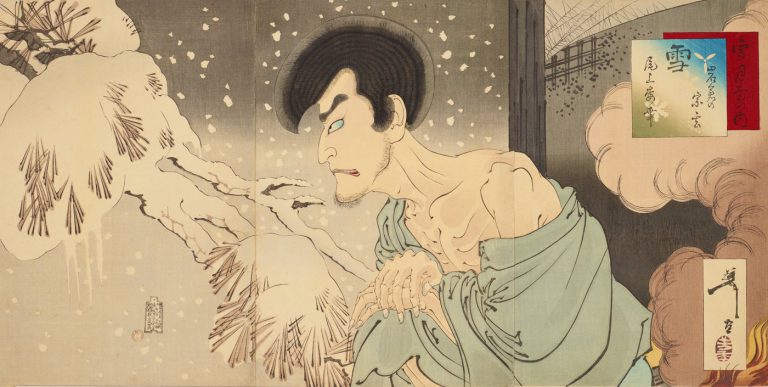 He criticized the social and moral decline through his art, portraying it perfectly. Yoshitoshi suffered the cruel laws of his time imposed by the Tokugawa Shogunate (1600-1868). Several wars occurred in those years, making relevant the impact of westerners. He was creating these prints in order to exorcise himself from the pain. However, his art gives off a singular beauty, making those extreme violent scenes seem delicate.

In 1863 Yoshitoshi’s father died, and his death became one of his biggest inspirations, along with the cruel and violent laws enforced at that moment. It was a way to capture his own fears and demons, as seen in the following artworks.

The Bloody Art of Muzan-e: 28 Famous Murders with Verse

Within this series we can find one of the most famous pieces, entitled: Eimei nijūhasshūku (英名 二十八 衆句), Twenty-eight famous murders with verse. These beautiful prints were accompanied by small fragments of poetry, representing brutal situations based on kabuki plays and historical events. Muzan-e represented atrocities and explicit images, this series being the first example of the genre. The compositions, colors used, pattern design, and many details are unique.

Furuteya Hachirōbei murdering a woman in a graveyard is the best-known print from the series. The protagonist here is not the murderer but the victim; a woman whose skin is being torn into strips. She is falling diagonally, which is highlighted by her clothes, marking the entire composition of the picture. It makes it easier to read, as the viewer follows the falling line. In the scene, there is a certain depth, formed by the rocky landscape, but the main focus is the murder. Yoshitoshi is so detailed that even the colors of the robes have been deliberately chosen to compensate for the visual weight of the image, allowing the audience to better understand what is happening.

Serial prints were common in the ukiyo-e technique. It was a format that was bound or transformed into scrolls for personal collection or use.

Despite the brutal theme, they were highly successful. The public admired and enjoyed these illustrations, full of color, dynamism, and violence. The murders shown are very graphic or explicit, but still very subtle. They seem to be frozen in time, in full swing. The floating robes especially stand out due to the sudden movements of the characters, and how the fabric of these present all the imaginable qualities, patterns and textures. It is important to understand how surreal those situations are according to physics, as seen in the following artwork.

Muzan-e influenced many mangaka such as Suehiro Maruo, Shintaro
Kago, and Toshido Maeda. It was also a strong influence on Japanese
cinema and other doctrines, reflecting ruthlessness in numerous ways,
but always elegantly. Tsukioka Yoshitoshi definitely had a huge impact on
coetaneous ukiyo-e artists, being one of the first creators of
muzan-e.