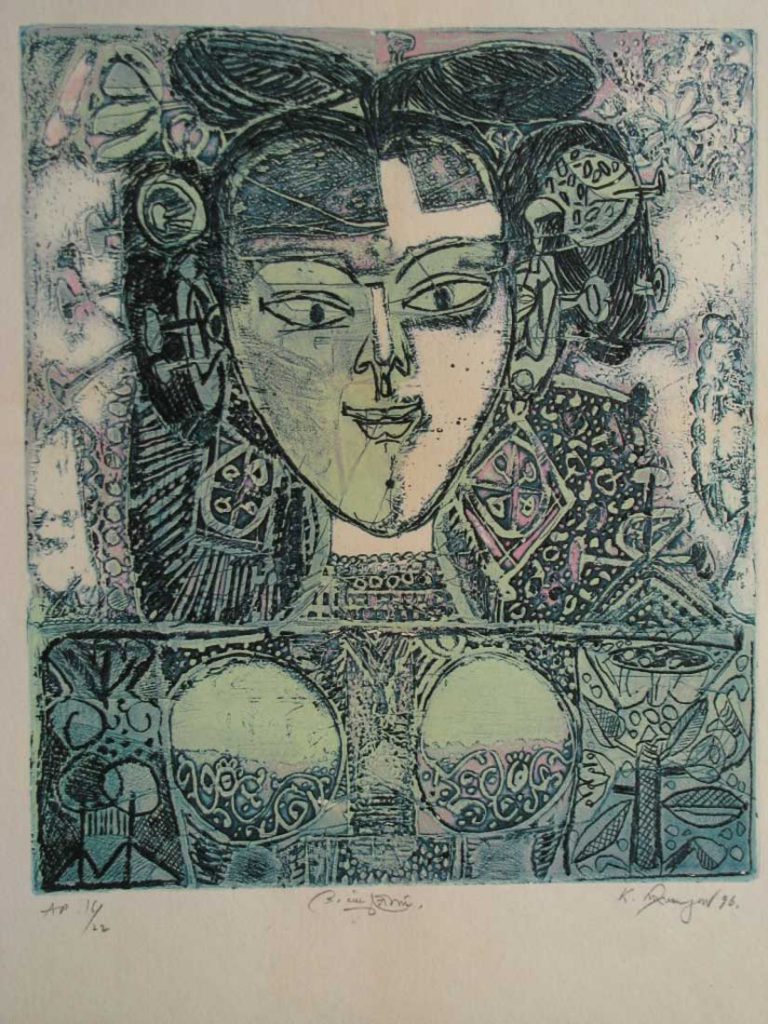 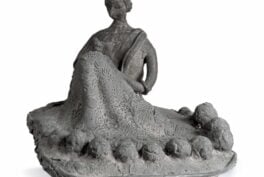 Indian Printmaking traces its lineage from the narrative of the father of Indian modern art, Raja Ravi Verma, and his oleographs. Besides, Verma was a pioneer artist in establishing printing presses in India to publicize art. Modernism paved a trail in Indian artists’ practices and affected the visual terminology of printmakers too! Although the number of prominent printmakers is fewer than painters and sculptors, this is generally a favorite subject for curious practitioners. We shall study a few popular modern Indian printmakers (born before Indian independence) who invented techniques as well as artistic concepts.

Chittaprosad Bhattacharya‘s oeuvre features striking achromatic figures. Known for his heart-wrenching documentative drawings of the Bengal Famine, 1943, Chittaprosad’s prints exhibit the same set of visuals. He was a part of the Communist Party of India (CPI), which issued the magazine, People’s War. Hence, he published his drawings in the magazine to out insensitive British regimes and the resulting severe poverty they caused.

Somnath Hore worked mainly in lithography and intaglio. Contextualizing social issues that defined the period, his artworks depicted realistic scenes compulsively. Regarded as one of the top Indian printmakers, he studied at the Government College of Art and Craft, Calcutta (now Kolkata). Later, he joined as head of the Graphics department at Kala Bhawan, Shantiniketan, Kolkata.

He significantly experimented with various methods in printmaking. Later, he developed a trademark pulp-print technique which the Wound series represents. Pulp-print devised a method of embossing the paper to develop tangible abstract impressions.

Haren Das, as he is fondly known, was one of the master Indian printmakers. He worked in linocut, drypoint, etching, and wood engraving. Depicting everyday life and landscape, a delicate simplicity characterizes his prints. Influenced by the Ukiyo-e, Das also experimented with multi-colored prints. Projecting a lifelong dedication to rural folk, he not only studied at but also served as a lecturer to the Government College of Art and Craft, Calcutta.

“Printmaking became popular in India during 1921 with Nandalal Bose introducing it to Kala Bhavan in Santiniketan. From his visit to China and Japan in 1924, he brought back Chinese rubbings and Japanese colour woodcut prints. Owing to this, the students of Kala Bhavana thus established a direct contact with original prints of the Far East. Benodebehari Mukherjee and Ramkinkar Baij experimented with this medium from the 1930s to 1940. Chittaprosad and Somnath Hore used linocuts and woodcuts to disseminate leftist ideologies, reformist concerns and socio-political critique of events like the Bengal Famine of 1943 and the Tebhaga movement.”

KNN, The History of Indigenous Printmaking, 2014.

Krishna Reddy‘s abstract prints draw our souls deep within his visual matrix of hatched linearity. Yes, he was one of the most revered Indian printmakers, specializing in intaglio and viscosity printmaking. Later, settled in New York, Reddy was trained at Kala Bhawan, Viswa Bharati University, Kolkata under Nandalal Bose. His international art training spans a sequence of master-teachers like Henry Moore, Constantin Brancusi, Ossip Zadkine, and Stanley William Hayter. Proof of early exposure to modernist practice: Reddy met many European and American artists at Hayter’s Atelier 17, where he worked as Associate Director.

Although Jyoti Bhatt studied painting at MS University, Baroda, he focused on printmaking. Practicing intaglio and screen printing, he influenced several other modern artists. Discovering a revived meaning of traditional Indian art forms, his prints are replete with interactive semiotic representations. He also indulges in digital printing, photography, and holography. Furthermore, his photos have captured the folk culture of Gujarat. His archives are also comprised of many photos of his alma mater where he worked as a professor for a long tenure.

Laxma Goud‘s prints emphasize a deliberate mixture of rural and urban experiences. Ranging in a variety of thematic content, Goud’s forms are expressed through the lens of a renewed vision of sexuality in a rural locale. He studied Diploma in Drawing and Painting from the Government School of Art and Architecture, Hyderabad. Filled with stylized local figures, his works are rustic, in a sense.

Bearing surreal and sensual narratives, Anupam Sud experiments to merge intaglio with lithography and screen-printing. Trained at the College of Art, New Delhi, she found her unique style under the guidance of Somnath Hore. Interesting to note, she peculiarly fuses color in the achromatic palette. Pushing the conventional outlook towards sexuality, Sud’s figures seemingly appear contemplative and brooding, underplaying a tacit discussion. One of the few female Indian printmakers, she has conducted several international workshops.

“My print images can never convert into painterly images for the canvas, as the working body itself rebels. When images enter my mind, I see textures that belong either to etching or to painting. I see no easy conversions as the basic temperament of each process varies and so do ways of arriving at the end result.”

“As a printmaker, I feel Printmaking is a community practice. The institutional printmaking process needs more engagement and contemporary involvement in terms of techniques and language. Institutional printmaking pedagogy could be explored beyond the studio practice. Because of the equipment limitation, I think institutes can be supportive by allowing the Indian printmakers to practice post the academic years, too.”

Koustav Nag in an interview with the author.