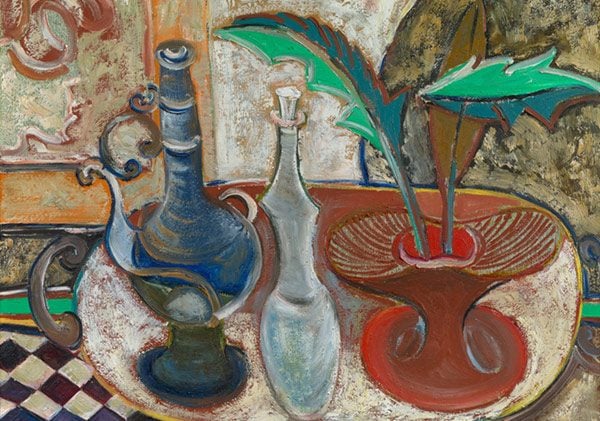 Progressive Artists’ Group (PAG) was an answer to the existing Indian institutional structure of exhibitions in the mid-20th century. It was a collective primarily formed by Francis Newton Souza, Sayed Haider Raza, Krishnaji Howlaji Ara, Hari Ambadas Gade, Maqbool Fida Hussain, and Sadanand Bakre. Later, Vasudeo Gaitonde, Krishen Khanna, Tyeb Mehta, and Akbar Padamsee, among other popular Indian modern artists, joined. While unearthing their European influence, many PAG paintings reflect a range of Impressionism to Post-Impressionism features! Among them, a few listed below will impress the idea.

Progressive Artists’ Group was established in 1947 in Bombay (now Mumbai). The founding artists had not only experienced but also observed the stagnancy in artistic idioms of modern Indian art. PAG aimed to reform and remodel the methods of expression, as well as exhibit them. As a step towards re-realizing the idea of experimentation, they looked up to European modernism. Hence, the Indian diaspora of a few PAG artists brimmed with yearning and enthusiasm for learning the prevalent wave of modernism and wished to unlearn traditional redundancy. With artists moving out, the PAG disbanded in 1956.

It’s all very well talking in metaphors about having one’s roots in one’s own country. But roots need water from clouds forming over distant seas; and from rivers having sources in different lands.

Co-founder of PAG, Francis Newton Souza (1924-2002), is the epitome of rebelliousness and insurgence. Anecdotes of his expulsion from Sir JJ School of Art, Mumbai, demonstrate an idea of his fearless personality. Although the influence of European modernism shows in his colorful paintings in the early years, the portraits and sardonic imagery take off from representative signs.

Through the vivid transformation from Indigenous to European to innately Indian, Sayed Haider Raza (1922-2016) charts a route that safeguards color meticulously. Raza’s entire oeuvre charms with varying color palettes, whether in his early landscapes, branching into Impressionist and Post-Impressionist paintings, or in the later mature phase of his Bindu paintings. Both Raza and Souza left India within a few years of the establishment of the Progressive Artists’ Group.

Hari Ambadas Gade’s (1917-2001) paintings show a direct influence of Impressionism and Cubism. Although the below painting doesn’t present a geometrical structure, Gade was greatly influenced by scientific theories. His attempt to break off from colonial subjugation was expressed through his ferocious and exceptionally demanding brushstrokes.

Krishnaji Howlaji Ara (1914-1985) bestowed benevolence in his engagement with his students and the younger generation by helping with funds. Living in a poverty until the end, Ara’s simplicity is reflected in his landscapes. They also display themes of socioeconomic conditions. His preoccupation with colors marks his concerned and compassionate personality.

Maqbool Fida Hussain (1915-2011) was one of the foremost Indian modern painters who eventually gained worldwide recognition. Hussain was a self-taught artist, unlike the league of the academic Progressive Artists’ Group. Having painted film posters, his involvement with PAG drove his artistic sensibilities and his aesthetics of expression.

Sadanand Bakre (1920-2007) was the only sculptor in the Progressive Artists Group. Their dynamic personality as well as a sheer sense of experimentation denoted his lifelong oeuvre. His paintings and sculptures later trod to the realm of abstraction while innovating idioms and styles.