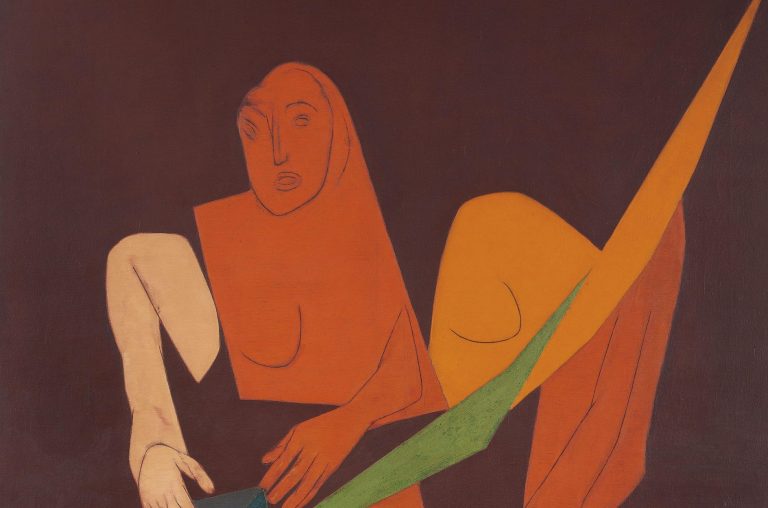 It was the early 20th century when Modernism spread its wings in India. This happened as a result of exposure to various European artists. The exchange of ideas inspired Indian modern and abstract painters to experiment and delve deeper into their consciences in order to express themselves better. Abstraction ruled the minds not as an ideology or a principle but as an intention to know the unknown truth. It was a wish to experience the unmanifested. Several painters made unassuming leaps from their influences to their very own methods of expression. As a result, many modernist painters created some of the most stunning abstractions.

Art to me is a happening and performance, an instant plunging, flirting and merging, with life, with its being and becoming it. All that is there on the canvas is but a charge in celebration.

An unconventional set of imageries oozed from the brush of the artist-activist, Ambadas Khobragade. His brushstrokes appear like wavelets of his sensations. They are spontaneous and ephemeral. During his childhood, he had been enriched with Gandhian values. However, later he had to face the political realities of life in India. As a result he became part of the revolutionary and essential group called Group 1890.

Mohan Samant expressed himself in a very peculiar and individual style. It is a perfect blend of figurative and abstract. He used a wide range of materials, including high impasto, which gave a low relief to the base and a set of mundane visuals. Rendered on the canvas, his mundane figures were consciously let free to choose their own path of lines and shades. This resulted in an enigmatic outcome.

These paintings stand out from the rest. Tyeb Mehta was a simple personality. He offers us a repertoire of stylized figures which he portrays repetitively. In each painting, it is the slight distortion that keeps the meaningful form in place.

Vasudeo Gaitonde named himself a “non-objective” painter. He stated that his paintings did not bear any particular pre-thought-out context. As well as using abstract forms, he also created paintings that showcased calligraphic fonts which resembled the hieroglyphic symbols of the Harappa civilization.

The distinguished works of Jeram Patel are the epitome of his quirky style. At the same time, they are vehement signatures of a spontaneous temperament. These artworks revolutionized modern Indian Art and the timeline of Abstraction.

SH Raza had a very bright life. He came out of his shell to pursue his career in Paris at a very young age. His initial, conventional abstractions paved the way for a personal and minimalistic rendering of geometric forms. Bindu, a circular form, staged a prominent appearance in his later, advanced and stunning abstractions.

Ram Kumar was a simple-minded man with a noble soul. He expressed his inherent ferocity through beguiling abstractions. His palette did not lack tonalities; instead, it brightened with time and deepened with age. The colored stretches float to take a rugged road of yet another shade.