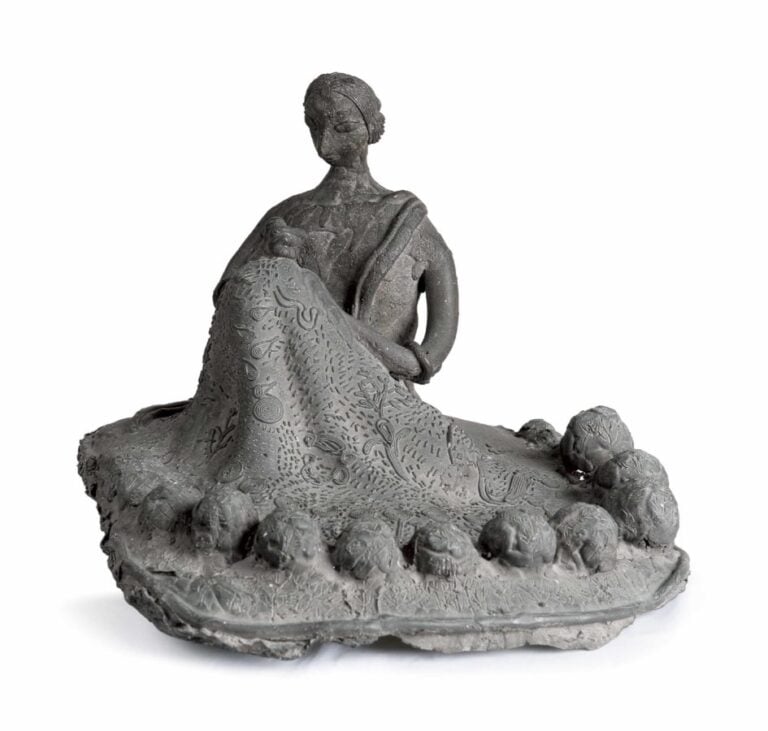 Modernism in India did straddle, sneaking lopsided avenue from the ancient to the present. The post-colonial art is typically mentioned as Modern art because many Indian artists had begun their sojourn of westernised abstract expressionism.

India became independent from the lawful clutches of the British in 1947. Among the modern artists, of the same period, this article mentions the popular five modern Indian sculptors that displayed a remarkable set of an oeuvre.

Ramkinkar Baij was a maverick who believed in his own guts and proved to be flamboyant yet noble in his manoeuvres. Having worked his whole life with the subject of tribal communities, his works are contemporary and dealing in the sub-textual meaning of vividness. Ramkinkar, honoured by Padmabushan in 1970, served as a pioneer to modern sculpture while he along with his contemporary and fellow artist, Benode Bihari Mukherjee, as professors of Kalabhavan strived to embed experimental values within the campus.

His works were not only provocative that being subjugated with the opposition at multiple venues but also the same subjugation was met with nonchalant attitude by the veteran artist. Ramkinkar Baij worked with the medium of varied regional stones, metal and expressed in the form of sketches — hitherto they are animate.

Adi Davierwalas sculptural installations showcase his inherent interests in Science and Maths. The geometric assemblages with the help of multiple mediums were his lifelong methodology of expression. Being a self-taught artist and academically a pharmaceutical chemist, there appeared a convergence of influence and self-trials in his sculptures. Moreover, he had initially begun practising in wood with basic training from N.G. Pasare and later he employed stone, marble, and metals for his creative pursuits.

It feels while comparing the voracious drawings and flamboyant assemblages that she must have had made a deliberate attempt to replicate what she drew into what she sculpted. Piloo Pochkhanwala was a self-taught artist who imminently employed scrap metal over the conventional mediums — the two-dimensional expressions were validated by three-dimensional through the junk.

Being one of the proficient woman sculptors during the time when women did not see the hope of empowered exposure, she had made it big having exhibited at multiple exhibition spaces, in India.

What one sees at the first encounter of Shankho Chaudhuri's sculptures is an individual attempt of stylisation. They are rhythmic and following a lyrical route creating an enigmatic loop of visual. Moreover, they appear to be minimalised, inspired by natural elements that are quotidian yet exceptional in the eyes of the artist. Shanko Chaudhuri was a student of Ramkinkar Baij and had assisted him in Nepal for the work of War Memorial. It is there when he learned the process of metal casting, by which his majority of artworks are depicted in.

“It is the playfulness while exploring the possibilities of one given medium that fascinates me. But enjoyment or reactions to a given medium or style can never be static, or else it would soon turn the artist into a fossil.”
- Sankho Chaudhuri

Having been part of Indian Society of Oriental art, formed under the aegis of renowned Rabindranath Tagore, from the age of 14, Meera Mukherjee had already been well versed with the sense of experimentation. Post her education at Delhi Polytechnic in Paintings and Graphic, he moved to Germany to study further in the same at Hochschule fur Bildende Kuenste in Munich. With the exposure to Dhokra sculptors in Bastar from Chhatisgarh, India, she solely practised in the three-dimensional forms, for which she became revered in. Largely covering quotidian figurines, her sculptures exercise along the dual road of subtlety and ferocity, attributed with an unnerving tactility.

Learn about the Modern Indian painters that had been contemporary to these modern Indian sculptors.