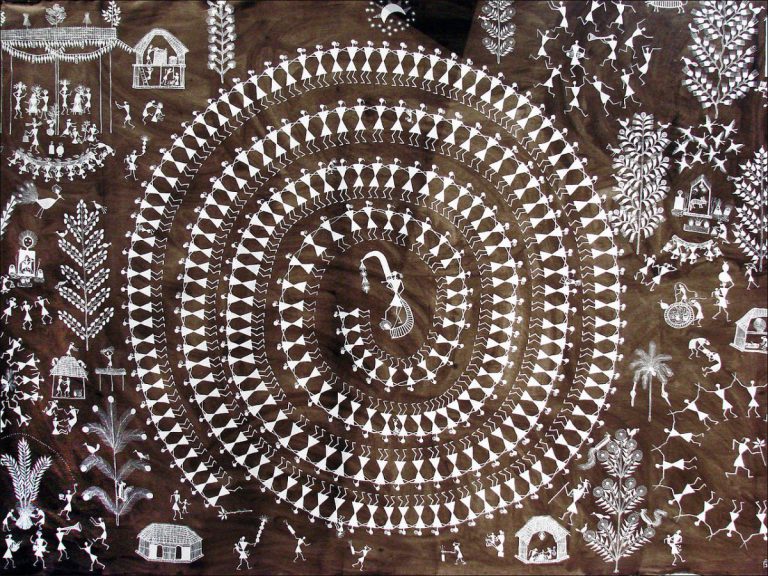 Jivya Soma Mashe is an internationally acclaimed Warli painting artist. A tribal artist from India, Mashe was known for wonderful Warli paintings, which owe their origin to prehistoric rock art. Warli painting allocates aesthetics to everyday life instead of traditions. Additionally, it is a method of a celebratory act by the community, rather than an ad hoc aimed to convey a message. Mashe and his family were lifelong proponents of Warli art, reviving its form and content in the contemporary milieu.

What is Warli Painting?

On a flat, coarse background of Indian red or burnt umber, a spiral of minimalistic human figures, holding hands, appears to move in a circle animatedly. Notably, the figure in the center, presumably a man, holds a large instrument. Referring to the merriment vibe and dancing figures, one can deduce that it is a musical instrument. What is it called? The human figures are far from a realistic rendering. Incredibly, they are simply two triangles, joined at one vertex, with a circle as head and linear gestures of hands and legs, rendered in white chalk. Furthermore, the surrounding space shows huts, trees, and a few more human figures involved in daily routine. This is a fundamental visual of Warli painting.

Warli is the name of a tribe based in a couple of towns of Western India. Etymologically, waral in Warli means a piece of land. As suggested, ancestors would spare a part of their land, amidst a forest, to irrigate. Subsequently, the Warli tribe became known for its minimalist art form. According to the tribal art convention, the form of the circle derives from the sun and moon. At the same time, the triangle is from trees and mountains. Finally, a square, which is pure and devoid of origin, encloses the main deity, called Palghata in chauk.

Instead of representing religious and mythological subjects, they are known to render social and customary life commemoratively. Hence, a central figure plays a musical instrument called Tarpa. Surrounding him in a circle, the villagers dance, interlocking their hands with alternate partners. Furthermore, Warli painting artists depict scenes of farming, smithing, and fishing, among others.

In the process of the Warli art, artists prepare the wall with brick, geru, and branches. They use chewed bamboo sticks to paint with rice paste bound by a certain gum. However, today the artists have switched to canvas, paper, and brushes.

“In the way the Warli spread unassuming bits of wood on the ground, to dry them in the sun; the way they lay out their rice crops; and, just as simply, and among other examples, the way they clean the trodden earth floors of their huts, all this calls to mind, by way of the subtle, sensitive, and elegant attention paid to each of these actions, the fact that their sole deity is the mother goddess, goddess of the earth and fertility, Palaghata.

This cult, if that is what it is, inspired–and still to this day inspires–in them profound respect for nature. The Warli also express this respect for nature through painting. Through their themes, motifs, and rudimentary style, all Warli paintings–and more particularly the works of Jivya Soma Mashe, the first artist from this tribe to break free from ancestral rituals–seem to be in praise of the Earth, just like every work resulting from Land Art.”

An Indian Warli painting artist, Jivya Soma Mashe was born on the 19th of May, 1934, in the Dhamagaon village of Maharashtra, India. Significantly, he implemented instrumental recognition of the tribe on the world map of art. Not only did he reverse the age-old ritual of women-oriented folk art but also transitioned it to a status of contemporaneity.

Due to his mother’s untimely death at his age of seven, Mashe did not speak for a while. To communicate, he would draw figures on the dust, which appealed to the community. Surprisingly, this granted him his initial local recognition. Although Warli women solely practiced this art, Mashe dismissing the traditional ritual and continued to practice undeterred. Additionally, he was radical in developing a set of new forms and compositions. Additionally, the newer template of practicing Warli painting inspired the budding artists of the community.

There are human beings, birds, animals, insects, and so on.. Everything moves, day and night. Life is movement…

Having been appreciated by the then Prime Minister of India, Mrs. Indira Gandhi, Jivya Soma Mashe gradually acquired momentum in receiving national and international exhibition invitations. In 1975, his first solo exhibition, under the mentorship of Bhaskar Kulkarni, an artist from India, was held at Chemould Art Gallery, in Mumbai. In the following year, his debut international show was conducted at Palais de Carnolès, Menton, France.

Upon receiving fame, Jivya Soma Mashe attracted several international photographers and artists. They would arrive at his rural home, where he would humbly greet and serve them. Among them were, Richard Long, an American artist, and Herve Perdriolle, a French art critic, collector, and curator. They were notable associates. They spent a long time at his residence, meeting the local community and acquainting themselves with the folk culture of India. While there, Richard Long, with the involvement of local men, practiced large-scale land art. In 2003, at Museum Kunst Palast in Düsseldorf, Germany, Richard Long and Jivya Soma Mashe had a joint exhibition.

Jivya Soma Mashe was a recipient of the National Award for Tribal Arts in 1976. In addition, he was conferred with the Shilpi Guru as well as the Prince Claus Award in 2002 and 2009, respectively. One of the reputed Indian government awards, he received the Padma Shri for contributing to the tribal art of Warli. Notably, The Warlis: Tribal Paintings and Legends by Chemould Publications, and The Painted World of the Warlis, by Yashodhara Dalmia, are two books that feature his life and work.

Mashe’s life and works are coordinated by the simplicity yet grandeur, harmony yet vibrancy, and primitivism yet modernity. The unifying space on a deep red surface almost evokes a primeval instinct of biodiverse life. As we tread deeper into his drawn figure and objects, a meditative stance stirs our being to record each moment of change. Working until the end, Jivya Soma Mashe passed away on the 14th of May, 2004, at his residence in Dahanu, Maharastra.

With thousands of years of continuous history, China is one of the world’s oldest civilizations. It is also one of the most culturally unique...

Indian Printmaking traces its lineage from the narrative of the father of Indian modern art, Raja Ravi Verma, and his oleographs. Besides, Verma was...

Saraswati is the Hindu goddess of knowledge and the arts. Remarkably, in the Hindu tradition and in rituals, Saraswati occupies a more prominent...

The Qaysariya bazaar is located in the north of Naqsh-Jahan square of Isfahan. It was founded by Shah Abbas in the Safavid period. On the tile...