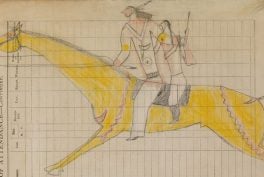 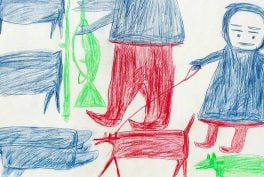 Stretching the Canvas: Eight Decades of Native Painting is a selection of nearly 40 paintings from the permanent collection of the National Museum of the American Indian (NMAI) in New York. The curators state that the choice to paint was an act of revolution for Native American artists in the 20th century. This exhibition is caught within a matrix of complicated histories, uneasy relationships between Native artists and various art establishments, and overshadowed by the historically pernicious treatment of Indigenous populations by the government of the United States. These paintings are radical in the sense that although multiple generations of Native American artists have had to contend with their systemic erasure, marginalization, and compartmentalization, these artists are carving out new spaces for recognition.

The National Museum of the American Indian (NMAI)

The National Museum of the American Indian (NMAI), a Smithsonian Institution, has occupied the first floor of the Alexander Hamilton U.S. Customs House since 1994. Constructed in 1907, this New York City landmark is located at One Bowling Green, the southern most tip of Manhattan. This site was formerly known as the south end of the Wiechquaekeck Trail and part of an old Algonquin trade route during pre-colonial times. At this location, the U.S. Customs Service had direct access to the bustling New York Harbor where it levied and collected duties on the endless goods flowing into this busy port until it relocated to the World Trade Center in 1971.

The art that was commissioned to adorn this Beaux Arts building compliments its original function of housing a governmental agency. The four monumental sculptures located in front of the building by Daniel Chester French (1850-1931) and the murals that fill the massive oval rotunda by Reginald Marsh (1898-1954) align with representations of nationhood and empire that are at odds with the mission of this building’s current occupants. The awkward tension between the atrocities committed by the U.S. government, and the cautious attempts of a federal institution to make amends for centuries of mistreatment, impacts the experience of walking through the galleries of the NMAI.

A Revolution of Painting

Stretching the Canvas is organized around the following themes: Grand Ambitions, Training Ground: New Mexico, Training Ground: Oklahoma, Cosmopolitans, Reclaiming the Abstract, and Indian Pop. While looking at these paintings, I observed that Native American identities and histories rise to the surface or pulsate just below, slip away unseen, or move through the art in unexpected ways. The concept of Native American cultures, identities, and presence is weighed down by timeless tropes and obscured by incomplete versions of American history. The diverse group of artists in this exhibition expose individual approaches to painting that disrupt and demand attention.

The panoramic landscapes of Kay WalkingStick (Cherokee Nation of Oklahoma, b. 1935) and Tony Abeyta (Navajo, b. 1965) tap into a sense of endlessness and timelessness. At first glance, they are an escape and perhaps a predictable choice of subject matter. However the gravity of relentless natural disasters destroying these precious lands also comes to mind. Jaune Quick-to-See Smith’s (Salish/Cree/Shoshone, b. 1940) Trade Canoe: Adrift (2015) is a colorful depiction of Syrian refugees fleeing their war-torn homeland. This is a bleak reminder of past displacements but also of the prevailing refugee crisis.

The beautiful and filthy frenzy of New York City influenced the cluster of colors and forms in the painting Brooklyn (2004) by Mario Martinez (Pascua Yaqui, b. 1953). The bright patterns and colors that appear in the small 2003 work on paper by Jeffrey Gibson (Mississippi Choctaw/Cherokee, b. 1972) foreshadow his later work with sculpture and installations that repurpose colorful beads, tin jingles worn by dancers during traditional ceremonies, and numerous other materials. I almost missed the nearly hidden silhouettes of two figures standing back to back, each holding a cigarette on the 2008 white painting by Duane Slick (Meskwaki/Winnebago, b. 1961). The unexpected emergence of a conjoined shadow from just beneath the monochromatic pattern running across the surface of the canvas makes for a dramatic and powerful painting.

Abstract forms are commonplace across centuries of utilitarian and decorative objects produced throughout the Americas. These deeply embedded forms of expression as background to the mid-20th century rise of abstract expressionism led artists such as Dick West (Southern Cheyenne, 1912-1996), Helen Hardin (Santa Clara Pueblo, 1943-1984), and George Morrison (Grand Portage Chippewa, 1919-2000) to find their own way into abstract painting. Helen Hardin’s Prayers of a Hopi Eagle (1965) is a small yet masterful arrangement of sharply defined and colorful forms explained by the museum label as based on traditional pottery designs. In the 1960s, George Morrison, who studied at the Art Students League in New York City, developed his own distinct approach to Abstract Expressionism, one that avoided direct links to a specific subject.

Dick West is represented by Spatial Swirl (1949-1950), a vibrant abstract composition that opens the show, as well as a small work on paper from around the same time period representing a male figure shown in traditional ceremonial dress that employs an equally bold color scheme. This figurative work hangs alongside works by artists of a previous generation who were trained in government-run programs such as Bacone College in Muskogee, Oklahoma, and the Studio program at the Santa Fe Indian School (later replaced by the Institute of American Indian Arts, or IAIA). These programs emphasized the flat, illustrative styles seen in the works of Stephen Mopope (Kiowa, 1898-1974) and Woody Crumbo (Potawatomi, 1912-1989). This style of painting from 1920s and 1930s were well-received at commercial venues such as the Philbrook Indian Annual exhibition in Tulsa. The Kiowa Six, a group of artists that included Mopope, were masters of a Plains region style of painting that features flat and colorful figures in traditional clothing and settings. Discarding traditional expectations and restrictions of the past, and releasing the desire to dig around one’s cultures on their own terms, became increasingly possible for later generations including Julie Buffalohead (Ponca, b. 1972) who is represented in this exhibition with The Confirmation (2009).

The American Indian (1970) by Fritz Scholder (Luiseño, 1937-2005) is the most appropriate painting to close out this exhibition. This image of a Native American man wrapped in an American flag deeply resonates with the palpable tensions that arise from the placement of the NMAI in the Alexander Hamilton U.S. Custom House. Scholder taught at the federally run Institute of American Indian Arts (IAIA) in Santa Fe and developed a style informed by Pop Art and modernist abstraction. He pushed back against the conventional style that had propagated from this program previously. More interestingly, this artist who was a quarter Luiseño, never identified as a Native American, even though he achieved professional success within this context due to his choice of subject matter. A controversial figure in his own right, Scholder leaves us with this final image that is a potent reminder of the nation’s complicated past and present.

Stretching the Canvas: Eight Decades of Native Painting at the George Gustav Heye Center of the National Museum of the American Indian at One Bowling Green in New York, NY, is open through January 2nd, 2022. Admission is free to all and proof of vaccination is required. 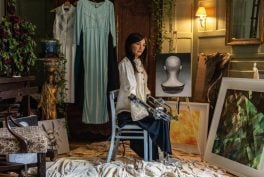 As COVID restrictions continue to loosen, it’s time to get excited about the post-pandemic art scene quickly spreading across the UK. From [...]