Masterpiece Story: A Ride for Liberty by Eastman Johnson 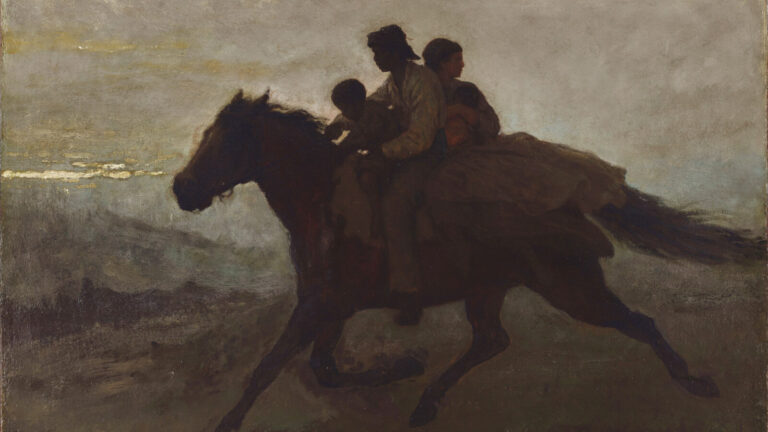 The cool morning dew blew against their warm sweaty skin as the horse led them towards the free North. Stories of another life, a free life, penetrated the South and gave hope to millions of black souls bound by bondage, slavery, and suffering. Four such souls now grasped for freedom by riding over the terrain of northern Virginia. Such a fearful but determined flight is captured in Eastman Johnson’s A Ride for Liberty from the collection of the Virginia Museum of Fine Arts. Painted during the violent throngs of the American Civil War, it depicts four fugitives escaping the bondage of slavery. It tells the story of a country divided by motives and melanin. It tells the story of one black family’s fight for freedom. In the end, we only regret the chances we didn’t take.

The American Civil War remains the deadliest military conflict in American history. From 1861 to 1865 the United States of America was not united but split between the Northern Union and the Southern Confederacy. The issue of the enslavement of black people in the South was at the core of the fight. The emotional, political, and social scars of this slave culture are still felt today in modern America, even 156 years after the war’s end. The Black Lives Matter movement of recent years only highlights the continued unrest in America between official policy and racial relations. Eastman Johnson’s A Ride for Liberty speaks about the timeless issues of life, liberty, and the pursuit of happiness.

No one with a moral conscious can doubt that slavery is one of the most horrific institutions ever invented by human society.  It strips the enslaved of their humanity, of their individuality. They are reduced to mere living commodities to be bought, used, and sold. Slaves have no political rights. They can be brutalized without consequence. Their families can be split, sold and killed without remorse. They can be regarded as simply organic machines to pick, plow, and harvest the plantation fields. Eastman Johnson’s A Ride for Liberty captures a family escaping this oppressive and brutal world. They are fleeing the small and isolated plantation towards the larger and more integrated world beyond.

A Ride for Liberty presents a family of four riding horseback across a foggy field. The family consists of a mother, a father, and their two young children. The father holds his older child while facing forward towards their destination. The mother holds her younger child while facing backward towards their origin. The mother wraps her right arm around her husband’s torso, her reflective glance back does not counteract the fact she is journeying with him and their children to a better condition. Their younger child is nestled against his or her mother’s breast. He or she seems asleep, unaware of the drama unfolding around them. Perhaps the baby is exhausted from the journey? We as the viewer do not know how long and how far this family has travelled. Is the family beginning its flight, or is it exhausted after days of travel? There is a look of willpower in the eyes of the mother and father. Despite possible fatigue and hunger, there is a stronger sense of determination.

Eastman Johnson captures a suspenseful atmosphere surrounding the fugitive slaves in A Ride for Liberty. Dark fog envelopes the ground and blurs the distant horizon. Early morning light peaks above the distant hills on the left side of the landscape. The sunrise light reflects off low-lying clouds, glinting as white shards against the sombre blue-grey sky. Touches of gold and amber highlight the underbelly of unseen clouds masked by the filter of fog. As the fast-moving horse moves across the landscape, the fog dissipates among its legs and reveals pockets of grass and ground. The patchiness of the foreground suggests uneven terrain and a difficult and uncertain journey ahead.

Eastman Johnson painted this image while following the Army of the Potomac in northern Virginia. The Army of the Potomac was the principal Union Army during the eastern battles of the American Civil War. Eastman Johnson was near Centreville, Virginia when he witnessed the event inspiring A Ride for Liberty. Johnson was awake during the cool morning of March 2, 1862 and observed a black family galloping across the nearby field heading towards the state border. In all likelihood the family is fleeing East because Centreville is close to the free Union capitol of Washington, DC.

Eastman Johnson’s A Ride for Liberty is an amazing painting for its historical precedence and artistic depiction. Very few paintings from 19th century American artists depict people of colour as positive and independent subjects within the American experience. Typically they are in the guise of foreign exotics, of domestic subjects, or even of subjected slaves. Rarely do we find a free or freedom-seeking black family. Here, in A Ride for Liberty, we see a black family taking their destiny into their own hands. They are courageously tearing across Virginia to escape enslavement. The horse’s tail and the mother’s skirt ruffle in the blowing wind. They flap with energetic speed. May we be experiencing one part of the famous Underground Railroad? Perhaps they are following a route forged by Harriet Tubman? What we can agree on is that we are viewing something deep, meaningful, and complex. A Ride for Liberty is one of those powerful images that can feel uncomfortable to view because it generates uncomfortable conversations among a racially diverse audience. It evokes questions about biases, prejudices, and privileges still resonating today. Until we collectively recognize and resolve that modern America still struggles with institutionalized privilege and racism, we need images like A Ride for Liberty to spark meaningful conversation. The journey to collectively repair and improve our nation is not over. We have come a long way since 1862, when A Ride for Liberty was painted, but we still have a long way to go.