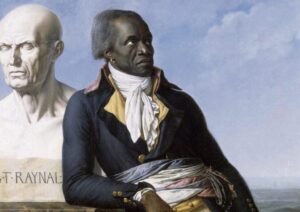 Although representations of black people were overlooked for a long time, current social and political movements participate to reanimate the interest around some of these artworks. The Portrait of Citizen Jean-Baptiste Belley is one of them. However, this painting is not just one of the rare portraits of a black person in the Western art tradition. Behind its apparent simple composition, it turns out to be much more complex than it looks; in the image of the historical period it illustrates. Let’s (re)discover it!

Anne-Louis Girodet-Trioson was a French painter during the 18th and 19th centuries. He was certainly the best pupil of Neoclassical painter Jacques-Louis David, who himself embodied artistic perfection for a long time.

In 1789, Girodet-Trioson won the Prix de Rome — a prestigious distinction in which the winner got to study in the Eternal City— by presenting  Joseph Recognized by His Brothers. The biblical theme of the painting, its theatricality, its reference to antiquity as well as its composition mathematically balanced made it a Neoclassical Davidian creation.

However, after he returned from his trip from Italy, Girodet-Trioson broke with the cold seriousness of Neoclassicism. He started to develop a more intimate and more sensual style, making him one of the pioneers of Romanticism. The portrait of Citizen Jean-Baptiste Belley was made during the painter’s transition from Davidian to Romanticism style.

Another important detail of Girodet-Trioson’s life is that he received a savant education, strongly influenced by the Age of Enlightenment and its ideals such as liberty and equality for all. This may be why he portrayed Jean-Baptiste Belley. The truly romantic  journey of this man, who literally fought for his freedom and the abolition of slavery may have inspired the humanist artist.

Jean-Baptiste Belley was the first black man to hold a government position within French history. Born around 1746 in Gorée, the infamous slave trade island just off the coast of mainland Senegal, he was separated from his family and sold as a slave while he was still a baby. Deported to Saint-Domingue, modern-day Haiti, Belley regained his freedom in 1764. Living as a free man, he owned a wig business, but he is mostly remembered for being an incredible soldier.

Like a lot of former slaves, Jean-Baptiste Belley fought in the French army during the American War of Independence. Belley actively took part in the Haitian Slave Revolt led by François-Dominique Toussaint-Louverture where all black people, free men or slaves, demanded their hard-earned independence, being the first of its kind in history.

Though the concept of black excellence didn’t exist yet, Jean-Baptiste Belley strived to gain his freedom and that of all of the other black people from the French colony. It is a natural consequence then that he was elected deputy to represent the French colonies in Paris regarding the abolition of slavery.

Two Portraits in One

In this painting, Jean-Baptiste Belley is standing, his face slightly turned to his left. On his right lies a sculpted bust of a man. The bust is an homage to the French philosopher Guillaume-Thomas Raynal, who actively fought against the slave trade.

Although both men were fought towards the same goal, their representation is contrasted. To begin with, Raynal’s figure is oriented toward the left, thus the past, while Belley is looking up to his right, toward a better future ahead.

Raynal is represented as an immaculate marble statue, which emphasizes the dark skin of the deputy. Some elements of the image somehow imply that Raynal is somehow greater than Belley both socially and intellectually. This is all the more accentuated by the fact that he is portrayed as a Roman Emperor. Moreover, Raynal’s name is engraved on the sculpture, while the initial title of the painting didn’t even mention Belley’s name.

Jean-Baptiste Belley still remains the main character of the painting. He is in the foreground, leaning nonchalantly on the column supporting the bust. He is represented as a soldier, dressed in an official uniform, holding a hat in his right hand.

As with the tricolor belt, the hat holds a blue, white and red feather to represent the French flag colors. It is also acknowledging Belley’s importance for the French Nation. Only his earring reminds us of his past as a slave. Yet, his damaged hands and his white hair entail the things he had to accomplish in order to be equal to any other white free man, such as Raynal.

A Painting in between Genres

The painting adheres to the conventions of portraiture: the physical representation and the symbolic personality of the character presented against a landscape background. What matters in this genre of painting is who is represented, and for what purpose. Other than that, the compositions vary very little. Or sometimes don’t even vary at all. Ten years after painting The Portrait of Jean-Baptiste Belley, Girodet realized a portrait of French writer Chateaubriand that is almost identical.

Chateaubriand had commissioned his portrait from Girdoet, as is the tradition. Indeed, when a painter realizes the portrait of someone, it is usually on request. Yet, there is not any archival trace of Jean-Baptiste Belley asking Anne-Louis Girodet for his portrait. Moreover, the two men probably never met.

And despite the historical appeal of Belley’s portrait, it cannot be considered as a historical painting either. Indeed, the scene depicted does not echo any historical nor personal moment in Belley’s life. The landscape of Saint-Domingue in the background is the only detail partially suggesting the exploits of the soldier. Yet, instead of a battle scene, Girodet painted an exotic, peaceful nature.

All the elements pictured in the painting serve its symbolism. Belley was not a soldier by choice. He did it to access freedom and peace.

Mixing the portraiture and historical genres, Portrait of Jean-Baptiste Belley is an allegory. Girodet decided to immortalize his time by painting Belley, who symbolizes the abolition of slavery.

Only five years after Girodet’s work was presented to the Salon, Napoleon I reinstated slavery. Despite being a high ranking soldier, and a legal representative of the French citizen, Belley was arrested. Ruined and isolated, he died in prison in 1805. Despite this tragic end, Jean-Baptiste Belley’s journey is no less important and breaks with an overly idealistic vision of the abolition of slavery.

Marcus Aurelius, the last of the five good Roman emperors once wrote: “The best way to avenge yourself is not to become as they are” (Meditations...