4 Contemporary Black Artists Everyone Should Know 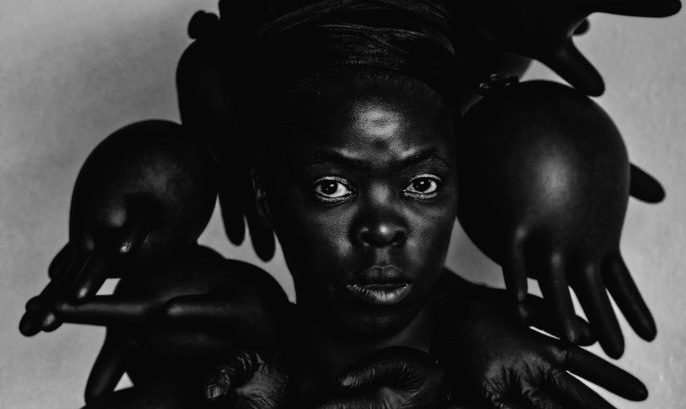 As art historians, it is our duty to acknowledge the importance of those overlooked and underprivileged artists who may not be as famous as they deserve due to the various forms of oppression they face, both systematically and in their private lives. This includes Black artists, queer artists, and other artists from other marginalized groups. In order to bring them some recognition, here is a very subjective list of a few contemporary Black artists.

It is already enough to mention Romuald Hazoumè’s cultural origin to begin a story of colonialism and suppression, as he was born into the centuries-old Yoruba ethnic group, in the capital of Benin, Porto Novo. His work first gained popularity in the early 1990s, when the Saatchi Gallery in London put on show his masks from upcycled materials, especially gasoline canisters, which bore witness to the European dirty practices of dumping trash in Africa.

I send back to the West that which belongs to them, that is to say, the refuse of consumer society that invades us every day.

He made a breakthrough with a piece completed in 2005 for the 200th anniversary of the abolition of slavery (1807), entitled Bouche du Roi. The piece was named after a place in Benin from which slaves were transported to the Caribbean and the Americas. It was a reworking of the infamous 1789 ship, named Brookes, composed again from upcycled materials and masks. The British Museum purchased the work. Follow his art, which takes on the agenda of various political and economic issues troubling Benin and West Africa.

Zanele Muholi‘s photographic self-portraits carry a magical and penetrating vibe of the old daguerreotypes. She prefers to be called a visual activist rather than a visual artist, as she has dedicated herself to advocating for a black gender-nonconforming community.

My practice as a visual activist looks at black resistance – existence as well as insistence. Most of the work I have done over the years focuses exclusively on black LGBTQIA and gender-nonconforming individuals making sure we exist in the visual archive.

Muholi also wants to increase the presence of black women in the media by challenging stereotypical standards of beauty, which often leave no room for people of color.

I wanted to use my face so that people will always remember just how important our black faces are, when confronted by them. (…) For this black face to be recognized as belonging to a sensible, thinking being in their own right.

I appeal to people’s consciences, artists must make people think.

Possibly it is Chéri Samba‘s mission that has made him so famous. In the 1980s he began signing his works “Chéri Samba: popular artist,” yet he did not only mean popular as infamous but popular in the sense “of the people.” He is considered a founding member of the Congolese “Popular Painting” school along with Pierre Bodo. This is because Samba’s paintings capture the social, political, economic, and cultural aspects of everyday life in Kinshasa, the capital of the Democratic Republic of Congo..

Although often portraying himself, Samba in reality tackles themes like AIDS, poverty, and corruption. In the painting above, Samba explores race and self-identity and appeals to the viewers’ conscience.

Kara Walker is an American artist best known for her room-size tableaux of black cut-paper silhouettes.  Her work examines complex issues such as gender, race, equality, exploitation, and violence. And their stark black-and-white form puts all viewers’ prejudices and views in perspective.

Her 2015 exhibition at the Victoria Miro Gallery in London, UK, engaged with the historical narratives on colonialism and slavery in Atlanta, the southern American city where Walker spent her teenage years. In her giant cut-out, she layered the associations surrounding Stone Mountain, a park on the outskirts of Atlanta featuring the world’s largest exposed granite monolith. Where today there is a theme park with a wild west train ride and popular laser shows, in 1915 this place was pronounced the spiritual home of the Ku Klux Klan.