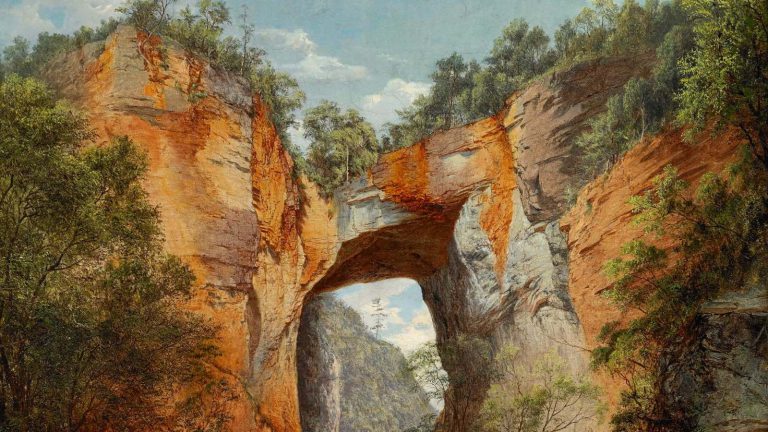 Virginia Arcadia: The Natural Bridge in American Art at the Virginia Museum of Fine Arts explores a natural wonder and its appearance in American art. The exhibition includes more than 60 paintings, prints, drawings, maps, photographs, and decorative arts from the 18th through early 20th centuries. What is Natural Bridge, and why did American artists love it so much?

What is Natural Bridge?

Natural Bridge is a geological feature in central-western Virginia. The name says it all. It is basically a huge, arch-shaped formation within the Shenandoah Valley’s native rock. It looks kind of like the massive arch of a long-lost cathedral. The bridge is incredibly old – over 400 million years old, to be exact – and entirely formed by natural, geological processes. No human intervention was necessary. Over time, the running water of Cedar Creek, a tributary of the James River, eroded a cave out of the stone. The walls of that cave eventually collapsed inward, and the ‘bridge’ is all that is left of its roof. Cedar Creek still flows through it.

Natural Bridge is 215 feet high and 90 feet wide. People have been passing both over and under it for a very long time. They’ve also been appreciating its wonder and beauty for a long time. The place has long been sacred to the native Monacan people of Virginia and continues to be so today. European settlers were impressed by it too.

One American who fell under Natural Bridge’s spell was Thomas Jefferson (1743-1826), the nation’s third President. Jefferson purchased Natural Bridge and the surrounding land in 1774. Then, he started talking it up. He encouraged American and foreign visitors to view it and artists to portray it. He even featured it in his 1787 Notes on the State of Virginia, his extensive description of Virginia for foreign readers.

Therefore Natural Bridge quickly became important to early America, and for good reasons. In its early years as a nation, the United States had a bit of an inferiority complex about its lack of grand architectural monuments and ancient ruins. Prominent Americans like Jefferson quickly realized, however, that whatever the young country lacked in built wonders it could easily make up for in natural wonders like Natural Bridge and Niagara Falls.

For American artists, particularly landscape painters like the Hudson River School, Natural Bridge was an ideal subject. Nineteenth-century American landscape painting engaged heavily with the Romantic movement in European art. Romanticism loved beautiful, timeless, and impressive scenery, like decaying castles and towering cliffs. Art history calls these qualities “picturesque” (emotionally evocative) and “sublime” (awe-inspiring). Both of these terms fit Natural Bridge perfectly. Also, it was fast becoming an American national landmark. Because of all this, the ‘bridge’ suddenly started appearing in a rush of aesthetic goods from oil paintings to prints to china patterns. A selection of these appears in the VMFA exhibition.

Artists from the famous Frederic Edwin Church, to the notable David Johnson, through the self-taught Edward Hicks all painted it. The otherwise unknown Caleb Boyle used it as a background for his 1801 portrait of Jefferson. Later, Henry Tanner included it in the margin of his 1822 map of the United States. A French company paired it with Niagara Falls in a prize-winning wallpaper pattern. Early photographers like Michael Miley also captured the beautiful and atmospheric view of it.

In a February 2021 lecture to open the exhibition, VFMA curator Christopher C. Oliver noted how all of these artworks are both timely and timeless in their own ways. All invoke the monument’s unimaginable age alongside details specific to the artists’ own eras. In particular, Frederic Church’s celebrated painting of Natural Bridge includes an African American figure who may represent Patrick Henry, a freed slave who worked as Natural Bridge’s caretaker and unofficial tour guide.

Up until the American Civil War, Natural Bridge was one of America’s top tourist destinations. However, its popularity was later eclipsed by the profusion of grand geological features further west, such as Yellowstone and the Grand Canyon. It officially became a Virginia State Park in 2016 and is open to the public. Natural Bridge is about 150 miles from the Virginia Museum of Fine Arts, home to the current exhibition about it, Virginia Arcadia.

Virginia Arcadia at the Virginia Museum of Fine Arts

Virginia Arcadia: The Natural Bridge in American Art runs at the Virginia Museum of Fine Arts from February 6 to August 1, 2021. The VFMA, located in Richmond, Virginia, is free to the public and open 365 days of the year. Visit the museum’s website for more details.