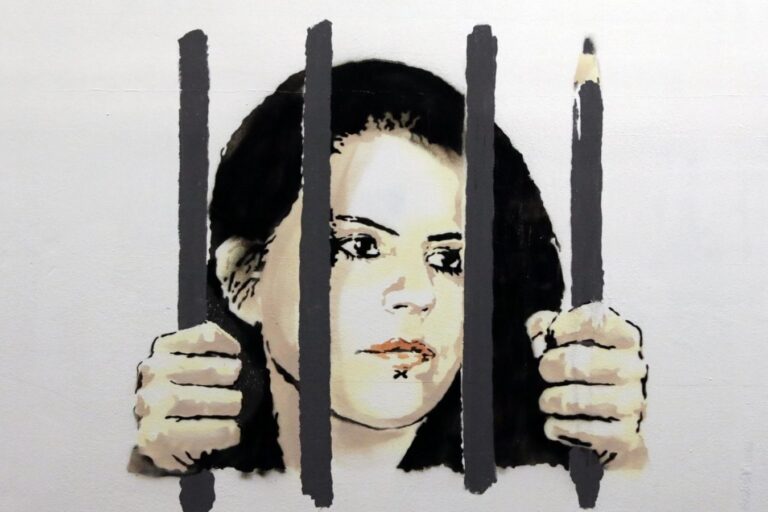 Banksy, probably the most famous and political engaged graffiti artist in the world stroke again – this time in New York City with two new works painted on NYC’s walls.

The first, unveiled via his official Instagram account, depicts a rat, one of the artist’s signature motifs running on the interior circumference of a clock -meant to portray an exercise wheel – and is located above a former bank building on 14th Street and 6th Ave. The building is currently set to be demolished.

The next one can be found on the historic Houston Bowery Wall, which became legendary in 1980’s because of Keith Haring. Banksy created a  70-foot-long mural which depicts the controversial incarceration of Zehra Doğan, the Turkish artist an journalist who in 2017 was jailed for painting a watercolor of a destroyed Kurdish town. Nasyabin was completely destroyed in an attack by the Turkish Government’s armed forces. Doğan, of Kurdish origin, best known as the editor of Jinha, a feminist Kurdish news agency reporting news in the Kurdish language with a staff consisting entirely of women shared her picture on social media, for which she was then arrested and sentenced to nearly three years in prison. She argued that she made the painting as a journalist but was charged with being connected to the Kurdistan Workers’ party, which has been battling the Turkish president, Recep Tayyip Erdoğan.

One year ago Zehra Dogan was jailed for painting this watercolour of a photograph she saw in the newspaper. Protest against this injustice by re-gramming her painting and tagging Turkey’s President Erdogan @rterdogan #FREEzehradogan

“I really feel for her. I’ve painted things much more worthy of a custodial sentence,” Banksy said.

The black and white mural resembles the jail and shows Doğan trapped behind bars, one of which is actually a pencil. The tallies represent the number of days she has been incarcerated and, at night, Doğan’s watercolor painting is projected above the mural itself.

Banksy’s identity still remains unknown, although especially since last year many believe that he could be Massive Attack’s Robert Del Naja.