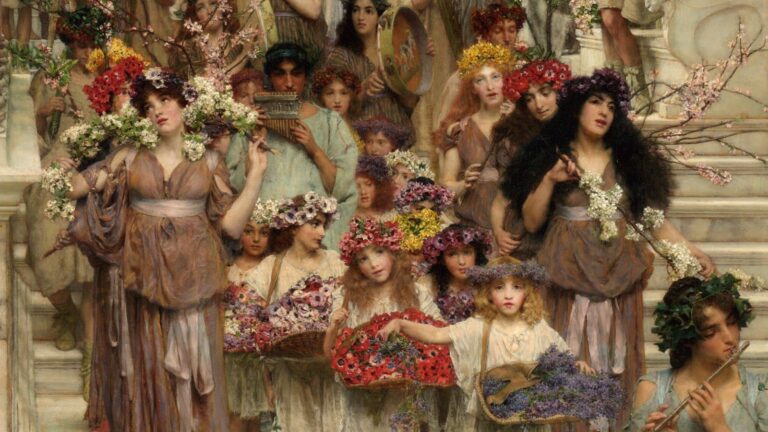 Persephone the goddess of vegetation was the beautiful daughter of Zeus and Demeter. Wherever she stepped, flowers would appear and all of the animals would follow her to marvel her beauty. Hades, the lord of the Underworld, was getting lonely and depressed in his gloomy domain. One day, He gazed up to the earth and saw the beautiful Persephone. The god decided to take her. He seized Persephone, put her in his chariot, and rode back to the Underworld before anyone could see him. Check our most beautiful spring masterpieces!

Demeter, the goddess of harvest and agriculture, wandered the Earth searching for her missing daughter. She discovered Hades was the one who had captured her. Enraged and distraught, she chose to neglect her duties until her daughter was returned to her. All of the plants soon began to die. The goddess covered the world in snow so that the world would be as barren as her heart. All of the other gods and goddesses pleaded with Demeter to make the earth fertile once again, but she explained to them that she would not do a thing until her daughter was restored to her. Zeus, in fear of losing everything on earth to Demeter's pain, ordered Hades to release Persephone. Finally, Hades agreed.

Being ravenously hungry from her capture and overjoyed that she was soon to be reunited with her mother, Persephone ate 6 pomegranate seeds from the platter that Hades offered her. When Zeus and Demeter came to retrieve their daughter, Hades announced that she could not be released for she had eaten the food of the dead. In response, Zeus made a compromise: Persephone would stay six months with Hades in the underworld, and 6 months with her mother on earth.

This beautifully classic tale explains why there are seasons with the year being divided into six months of blooming life and six months of winter and cold.

And guess what, we have already welcomed Spring! On this occasion, to greet back beautiful Persephone, we have selected 10 classic art masterpieces connected to spring. Enjoy :)

Primavera, meaning Spring, was created by Botticelli and has been described as "one of the most written about, and most controversial paintings in the world." It also is referred to as "one of the most popular paintings in Western art." The painting depicts a group of figures from classical mythology in a garden, but no story has been found that would bring this particular group together. Most critics agree that the painting is an allegory based on the lush growth of Spring. Accounts of any precise meaning vary, although many involve the Renaissance Neoplatonism which at the time fascinated intellectual circles in Florence.

Almond Blossom belongs to a group of several paintings made in 1888 and 1890 by Vincent van Gogh. These were painted in Arles and Saint-Rémy, in southern France which is full of blossoming almond trees. Flowering trees were special to van Gogh. They represent awakening and hope. He enjoyed them aesthetically and found joy in painting them. Almond Blossom was made to celebrate the birth of his nephew and namesake, who was the son of van Gogh's brother Theo and sister-in-law Jo.

In this verdant masterpiece entitled Springtime, Claude Monet uses his first wife, Camille Doncieux, as the model. Late in the year 1871, Monet and his family settled in a village named Argenteuil, which was located just northwest of Paris and is now a suburb. The village was a popular resort for urban pleasure-seekers. Colleagues of Monet frequently joined him and the village became associated with Impressionism. In the spring of 1872, Monet painted a number of canvases in his garden which often featured Camille. Monet's second wife, Alice Hoschedé, ordered the complete destruction of pictures and mementos from Camille's life with Monet. Resulting in Camille's image almost solely surviving on the basis of Monet's paintings.

This painting belongs to a four-part cycle of the Seasons, a theme which was frequently repeated by Arcimboldo for the Imperial court in Vienna and Prague. This particular series, which is now in Paris, had been commissioned by Emperor Maximilian II for Augustus the Elector of Saxony. The underlying principle of Arcimboldo compositions is the use of elements from an area of objects which is clearly distinct from others, which is done in such a way that they add up to a personified figure. The individual elements as such do not have any mimetic properties; they only receive them when they co-occur with others. What a beautiful cabbage on the arm!

René Magritte was a Belgian surrealist artist. He became well known for creating a number of witty and thought-provoking images, and he loved to paint birds. By often depicting ordinary objects in an unusual context, his work is known for challenging observers' preconditioned perceptions of reality. His imagery has influenced pop, minimalist, and conceptual art.

With a spray of flowers that seems to grow from her womb, this young woman personifies spring, the season of birth and nature’s reawakening. Along with three companion paintings representing the other seasons, this painting once adorned the ceiling of the Palazzo Barbo in Venice. When the writer Carlo Ridolfi saw the paintings in 1648, he described them as a “Capriccio of dreams”—a musical ensemble filled with “things that come into the minds of men while they are dreaming.”

Another art masterpiece to welcome spring is this procession of women and children descending marble stairs adorned with brightly colored flowers. Lawrence Alma Tadema here represented the Victorian custom of sending children into the country to collect flowers on the morning of May 1, or May Day, but placed the scene in ancient Rome. Alma Tadema's paintings also enjoyed popularity later when his large panoramic depictions of Greek and Roman life caught the attention of Hollywood. Certain scenes in Cecil B. De Mille's film, Cleopatra (1934), were inspired by the painting Spring.

8. Paul Gauguin, The Loss of Virginity (Awakening of Spring)

This painting was created in Paris in the brief period when Gauguin was interested in Symbolism. It depicts a Breton landscape with a naked young woman lying in the foreground. Behind her is a fox, which is the symbol of lust in Hindu mythology. In the background, a wedding procession in Breton costumes is approaching the nude figure. This work was produced in Paris, using Gauguin's 20-year old mistress, Juliette Huet, whom he left pregnant with his child when he went to Tahiti.

John William Waterhouse was an English painter known for working first in the Academic style and then for embracing the Pre-Raphaelite Brotherhood's style and subject matter. His artworks were known for their depictions of women from both ancient Greek mythology and Arthurian legend.

10. Walter Crane, The Fate of Persephone

And now we come back to Persephone. This is one of Crane's largest and most important paintings. Hades and his black horses have just emerged from a volcanic fissure in the earth in Enna, surprising the goddess as she stoops to pluck the fateful narcissus. Her three frightened maiden attendants, like the fates, witness the scene, but are divided from Persephone by the crack in the earth. The foreground is covered with flowers, chiefly narcissus and anemones; and a mountainous country sloping to the dark horizon of the sea with blossoming orchards and the walls and towers of a city with a peak in eruption beyond form the landscape background. A pomegranate tree blossoming in the foreground foreshadows the legend of Persephone and the promise of her return to earth. A tiny figure on the mountain seen in the distance was meant to indicate the sorrow of Demeter.