The Image of Discord: Pisanello’s Medal of John VIII Palaiologos 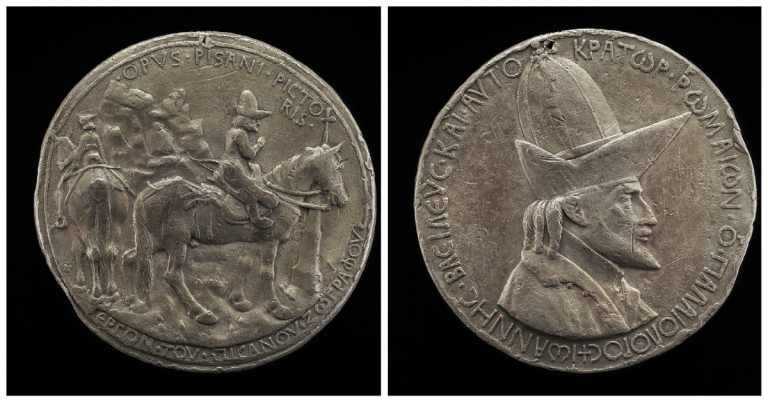 Antoni di Pisanello’s most famous medal conceals a story of schism, war, and the end of an era. A small piece with a huge history.

The 15th-century artist Antonio di Pisanello is best-known for his detailed portrait medals of scholars and sovereigns. His most famous subject is arguably John VIII Palaiologos (Ioánnis VIII), the penultimate Greek emperor of Byzantium. More than a portrait, Pisanello’s medal of John VIII is a window to a story of theological discord, paradigm shifts, and the twilight of an ancient kingdom.

In 1438, Pisanello –by then a well-established artist– was in the service of Leonello d’Este, lord of Ferrara. That year, Leonello hosted an important religious council meant to reunite the Eastern Orthodox and Western Catholic branches of European Christendom. Emperor John VIII, accompanied by Patriarch Joseph II, represented the former, while Pope Eugene IV represented the latter.

Both sides arrived under a shadow of crisis. Eugene IV was a disputed pope, challenged by an Italian lord who also claimed the pontificate. John was monarch of a kingdom on the verge of demise, encircled by a Turkish army bent on conquest.

Pisanello’s depiction of John VIII Palaiologos offers a unique glimpse at a Byzantine emperor. Byzantine art veered from the naturalistic style of European High Antiquity, leaving scholars with only abstract and sometimes primitive likenesses. Pisanello’s medal, by contrast, gives a lifelike profile of one of the last men to hold the Byzantine throne.

Reconciliation offered a solution to both men. Eugene hoped to leverage the prestige of a theological and diplomatic coup to legitimize his bishopric. Ioánnis, in turn, hoped to garner Catholic financial and military support against an encroaching Turkish sultanate. But John trod a familiar mire. His ancestor, Michael VIII Palaiologos, had tried and failed to achieve reunification almost two centuries earlier. Michael seemed to have the political capital to do so, having recovered Byzantium after a decades-long Catholic military occupation. But the ruthless emperor faced passionate opposition among Orthodox clergy and an unbending attitude toward Catholicization from the papacy. Michel died a condemned man, denounced by Catholic and Orthodox alike–a warning to his descendants.

There was another layer of historical pressure on the Greek emperor’s shoulders. John’s clan, the House of Palaiologos, rose to power in part because of its anti-Catholicism. The root of that anti-Catholic rage traced to 1204, the year French and Italian soldiers captured and plundered Byzantium. The Palaiológoi gained prominence as the liberators of the Greek capital, and vanquishers of the papists.

The wound of 1204 lingered. A millennium’s collection of texts, art, and relics forever departed the Greek East for the Latin West. Plundered statues adorned plazas and squares. Decorated relics were centerpieces in Catholic churches. Lecturers instructed the peninsula’s young nobility with the mathematical and philosophical texts taken from Byzantine libraries.

Perhaps most bitter was the cultural momentum visible in Italy. Where Greece was on the precipice of becoming a Turkish province, the Italian Peninsula was in the midst of a cultural and economic renaissance. Donato di Niccolò propelled classical naturalism in statuary, Filippo Brunelleschi advanced the limits of architecture and Francesco Petrarca and Giovanni Boccaccio empowered an Italian literary tradition in the mold of the ancients.

Pisanello grew up amidst this flourish, taking the opportunity to rejuvenate an artistic hallmark of Antiquity–the commemorative medal. Two well-known examples had already appeared earlier in the century, both depicting the Early Byzantine emperors Constantine I of Greece and Heraclius.

Pisanello’s sketches of Emperor John VIII survive almost six centuries after their creation. Notice the horses: Pisanello was well-known for his attention to detail regarding animals, especially steeds.

What better opportunity for a medalist than to create a work based on a living, breathing Byzantine emperor? (Indeed, Pisanello’s sketches of John and his entourage survive, with examples in Paris’s Louvre and the Art Institute of Chicago.)

Pisanello’s work resulted in something altogether unique for a Byzantine emperor: a realistic likeness. From its inception in the 4th century, Byzantine art veered from the naturalist style in favor of the abstract. But here was an emperor seen as adorned in a tall brimmed cap, long beard, thin face, and prominent nose–tactile, human features. But what of the outcome for Pisanello’s subject?

This illustration shows Pope Eugene IV at the head of a theological forum. Eugenius spent the better part of his papal tenure overseeing religious conventions, clarifying doctrinal disputes and demonstrating his authority.

John managed to reach an accord with Eugene, allowing the former to return home to Byzantium in 1439. No sooner had he arrived in the capital, however, before he faced somber realities. Plague made him a widower. Fundamentalist outrage branded him a traitor.

John would not push the matter: The accord, ceremonial as it was, became virtually stillborn. John died in 1448. His kingdom crumbled five years later. Eugene fared better. The superficial reunion of European Christendom did indeed grant him religious capital–enough for him to make a triumphant march into Rome and claim the seat of Saint Peter’s. Bishops and nobles abandoned his rival, accepting Eugene as the one true pope.

But where Eugene’s likeness would fade away, Pisanello’s image of John would live on. The late emperor would serve as a stand-in for ancient kings and Biblical figures, adapting to whatever an artist desired. Pisanello saw some of this popularity, with his portrait of John duplicated on reliefs and illustrations. An accidental phenom. A Renaissance mímos.

Andrew Montiveo is a longtime writer based in Los Angeles. A graduate of the University of California, Irvine, Andrew specializes in Mediterranean art history from Late Antiquity to the Early Modern Period.