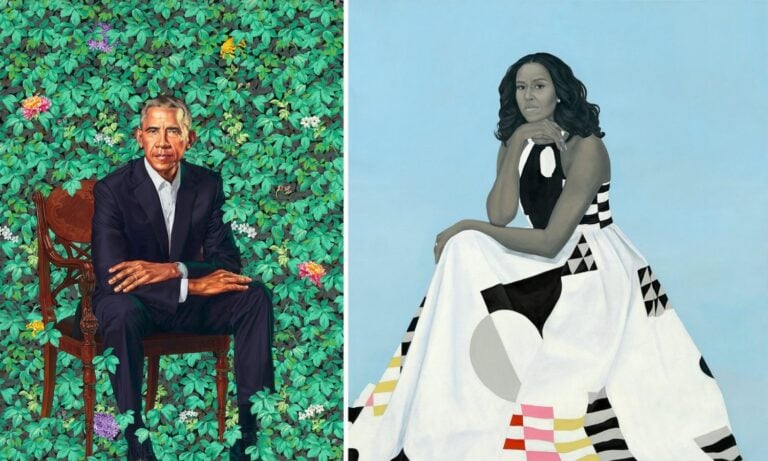 Masterpiece Story: Officer of the Hussars by Kehinde Wiley

On February 12, 2018, the official portraits of former US president Barack Obama and the first lady Michelle were unveiled. They are the latest additions to the collection of Smithsonian National Portrait Gallery in Washington, DC, which houses multiple portraits of 44 former US presidents. They range from a famous, classic style rendition of George Washington by Gilbert Charles Stuart to pixelated, mosaic-like portrait of Bill Clinton by Chuck Close. The event of adding a new work to the collection rarely sparks a lot of media attention, since majority of the works are prim and proper portraits that a contemporary art museum probably wouldn’t care to acquire (just look at Jimmy Carter or George Bush). This time it was not the case. Barack and Michelle Obama chose two artists for whom dullness is the utmost insult.

Former US president selected Kehinde Wiley, an artist known for naturalistic portraits of African Americans. Inspired by Old Master paintings, he arranges his models in poses resembling the masterpieces of Titian, Peter Paul Rubens, Giovanni Battista Tiepolo or Jacques-Louis David. He blends these classical references with colorful, wallpaper-like patterns in the background, resembling West African style fabrics or Arts and Crafts Movement designs. The subjects of the paintings are usually ordinary men and women Wiley meets in the streets. The fusion of classical references and African American models is the artist’s commentary on the position of black people in contemporary American society. This is precisely what enticed Barack Obama to choose Wiley as the author of his portrait. At the official unveiling Barack Obama said:

What I was always struck by when I saw his portraits was the degree to which they challenged our ideas of power and privilege.

Unlike his predecessors in the art of presidential portraiture, Wiley presented Obama not in a neutral and blunt pose, but one that makes a distinctive political statement. The President sits on a throne-like chair in a black suit, leaning forward with elbows on his knees. With a focused, solemn look on his face he looks like a careful observer of what is happening in his country a year after he stepped down from office. In contrast to this political reference, the background of the work is filled with personal symbols. The sitter is nearly devoured by a mass of greenery interwoven with flowers that carry a symbolic meaning. African lilies stand for Kenya, where Obama’s father was born; jasmine is a symbol of Hawaii, the birthplace of the President; chrysanthemums represent Chicago, the cradle of his political career.

While the critics praise Wiley’s work for being distant from previous presidential portraits, some still find it too dull and remote to be considered valuable by next generations of viewers. The second work from Obamas’ official portraits, the one of Michelle Obama, on the other hand, has been universally applauded as an extraordinary work, definitely outperforming Wiley’s painting. The first lady was painted by Amy Sherald, a painter known for giving her African American (and mostly female) subjects grey-toned skin, questioning the importance of race and addressing the issue of social justice. The figures are set against a monochrome background, which makes them look monumental and dignified. They draw the viewers’ full attention also because they frequently hold unusual props (giant cups, puppets or horse heads, to name a few) or wear colorful outfits with geometric patterns.

Sherald depicted Michelle against a light blue background, sitting with a chin resting on her hand. Her long and wide dress strengthens the impression of a triangular composition, with her head being the peak of the pyramid. The look on Michelle Obama’s face is not as solemn as her husband’s – her encouraging smile seems to convey the message that the former first lady voiced during the unveiling of the portrait:

[girls of color] will see an image of someone who looks like them hanging on the walls of this great American institution … And I know the kind of impact that will have on their lives because I was one of those girls.

Michelle Obama is wearing a captivating dress with an abstract pattern, which brings to mind Gustav Klimt’s portraits, notably Adele Bloch-Bauer I. The gown itself, designed by Michelle Smith, tells a story: Smith describes the design an expression of “desire for equality, equality in human rights, racial equality, LGBTQ equality”. The geometric details symbolize a “feeling of being held back. . . that we’re not quite there yet”.

Interestingly, the Obamas’ official portraits have found acclaim not only among the critics: 2-year-old Parker Curry was so mesmerized by the work of Sherald that she refused to stop staring at it. After a video made in the Smithsonian by the girl’s mother went viral, Michelle Obama herself met the girl and even shared a little dance with her.

Incurable art lover who thinks that the world would not be a good place to live without art museums, gothic cathedrals, art nouveau villas and jazz.