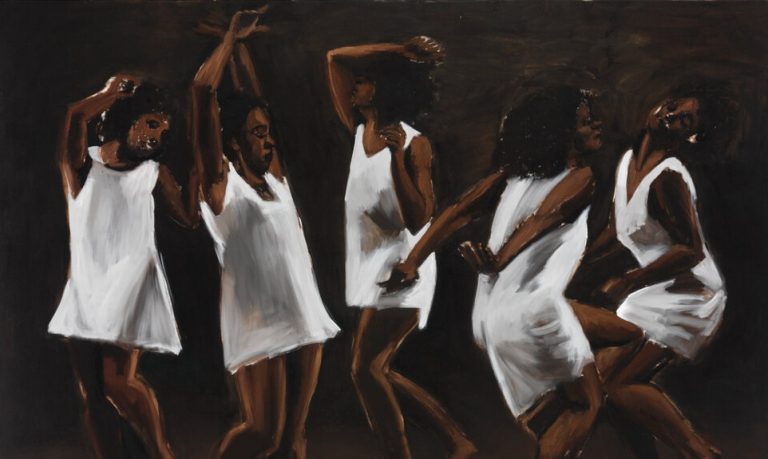 Lynette Yiadom-Boakye, The Hours Behind You, 2011. The Collectors List. Detail.

Emma Amos: The Story of the Postmodernist African-American Artist

Celebrated in 2018 with a solo show at the New Museum, the English painter of Ghanaian descent Lynette Yiadom-Boakye hypnotized me with the painting you see below (the starkly restored setting of the Venetian Palazzo of the Zattere certainly added to the impression). Lynette Yiadom-Boakye’s entire body of work comprises portraits of unknown characters who nevertheless quickly establish a living and strong emotional bond with the viewer.

This painting was inspired by a piece of news footage from an important international political summit that Yiadom-Boakye had seen on TV. A group of politicians was standing together but each of them was in a way isolated and separate. This gave a beginning to this group portrait of unknown characters in an unspecified place. As the artist herself expressed in a 2010 interview, her figures are:

Suggestions of people… They don’t share our concerns or anxieties. They are somewhere else altogether.

Her works lack a fixed narrative which creates an opportunity for viewers to project their own interpretation of a piece, which often becomes a political one, as all her works feature only black figures. The artist, however, tries to avoid any such politicizing of her painting:

People are tempted to politicize the fact that I paint black figures, and the complexity of this is an essential part of the work. But my starting point is always the language of painting itself and how that relates to the subject matter… Also, they’re all black because… I’m not white.

Yiadom-Boakye is able to paint a painting in a day to capture the feeling of a moment. She draws on formal aspects of traditional painting such as line and color but the way she handles her paint and portrays her subjects is undoubtedly contemporary. Here, the portrait of this young man with a flower could be compared with the portraits of Degas’s ballet dancers, yet at the same time, it has a strong contemporary feel to it.

Damien Hirst said about her painting:

Lynette Yiadom-Boakye says her portraits are about:

The wider possibility of anything and everything. They are about a feeling that you can’t quite place.