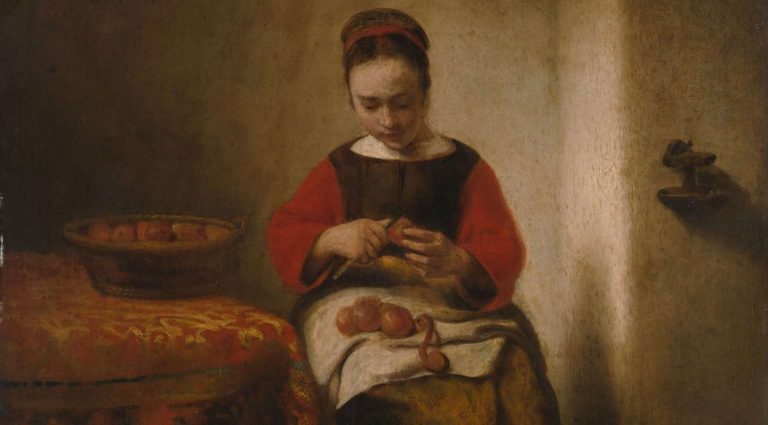 Today’s Masterpiece Story is about this lovely genre painting by Nicolaes Maes (1634-1693), a Dutch Golden Age painter who specialized in small-scale domestic scenes and portraits. What we know so far is that the main roles in this calm composition are played by a young woman and… apples!

Like many Dutch genre scenes, this painting features a woman engaged in household tasks. Here, the subject is a young maid absorbed in the act of peeling apples. The painting shows the influence of Rembrandt, Maes’ teacher. We notice it through the warm tones, soft modeling, and skillful use of shadows. The effect is homey and inviting.

In his genre scenes, Maes’ palette was often full of earth tones, though his portraits tended to be darker. He frequently used the color red as a connecting element. Here, he drew the whole scene together through the reds on the girl’s sleeves, her headband, the apples, and the carpet covering the table.

Young Woman Peeling Apples appears to be a straightforward, if lovely, scene of a woman doing some kitchen work. It doesn’t seem innovative in any way, but it actually was. In 17th century Dutch art, maids were more often shown like in the painting below, where the lady of the house finds her maid asleep on the job. Lazy and inept servants made frequent subjects for Dutch paintings.

In general, everyday life scenes with a moralistic undertone, or misdeeds of  lower-class people revealing their sexual and immoral nature were popular among the wealthy burghers in the Dutch Golden Age. Maes also painted some of these scenes, including the one below.

By contrast, the girl in Young Woman Peeling Apples is a model of diligence and restraint – qualities this society more typically attributed to higher-class women. As a spectator, you want to sit with her, not laugh at her. Turns out, this seemingly-uncomplicated little painting was actually rather progressive. However, Maes wasn’t alone in painting maids without mocking. Johannes Vermeer‘s famous Milkmaid would be painted only a few years later.