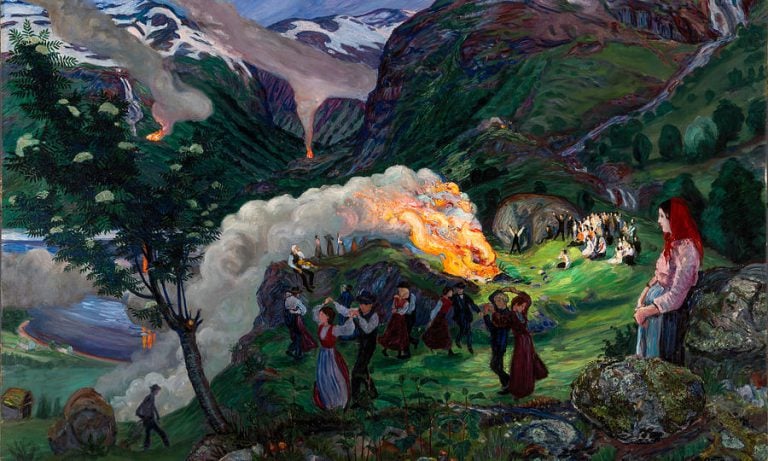 Last Days of Summer in Art

The summer solstice in June is celebrated throughout several cultures. The Scandinavian culture is no exception to that. Initially tied to pagan roots, the midsummer festival in Scandinavia has been associated with St. John the Baptist after the nations converted to Christianity.

With little to no difference between the practices, midsummer is celebrated in all Scandinavian countries in late June every year. To revere this old festival in our own way, let’s take a look at a few paintings from Scandinavian artists that featured midsummer as their subject.

Born in Norway in 1880, Nikolai Astrup depicts a midsummer night among mountains in his 1926 painting. As a Norwegian local, Astrup enjoyed portraying the everyday life of his hometown Jølster in his works. Similarly, in this painting, in a country setting similar to Jølster, the people are celebrating the summer solstice with a huge bonfire.

Connected to pagan roots, the bonfire lighting tradition is mostly embraced by Norwegian folks. As in the old times, it was believed that the fire would protect people against witches and evil spirits. Astrup’s use of vibrant colors of fire in the darker setting is a perfect representation of this tradition.

Anders Zorn was born in 1860 in Sweden. A painter, engraver, and sculptor at the same time, Zorn was one of Sweden’s most outstanding artists of his time. In this 1897 painting, the artist portrays the traditional midsummer dance. Dancing several choreographies by the maypole in traditional villagers’ clothes is a custom that Swedes have followed for a long time. Zorn’s Impressionist work depicts this tradition with perfectly balanced warm colors and soft and easy brush strokes.

The Swedish painter Kilian Zoll was born in Sweden in 1818. A graphic artist as well as a painter, Zoll embraced the artistic style of the Düsseldorf school. Generally leaning towards darker colors when painting, the artist took everyday life as subject matter in his works. For example, in Midsummer Dance at Rattvik, he depicts the celebrations from a large frame. The Swedish maypole, people dancing, and children playing games give a genial insight into the festive environment of the village.

Unfortunately, there is not much information available about the graphic artist and painter Emil Lindgren. He was born in Stockholm, Sweden, in 1866. Most of his works feature young middle-class women in solitude and domestic settings. In Midsummer, however, as subject matter, the artist depicts an important part of the celebrations, the preparation.

Here, he portrays a shared event where several people contribute to the building of ornaments for the celebration. Using light and vibrant colors, which is unusual in his works, Lindgren reflects on the collective spirit that comes with this old festive tradition.

The Danish painter P. S. Krøyer was born in Stavanger, Norway in 1851. As a member of the Skagen Painters, he spent most of his life in the little town of Skagen. Most of his works feature the people, daily life, and special events of Skagen. Similarly, in this 1906 painting, the artist represents the Danish way of celebrating midsummer, a.k.a. Sankt Hans Aften in Denmark.

As usual with Skagen locals, the town people are depicted to have gathered on the beach for celebrations. Expectedly, the huge bonfire is at the center of the work. All dressed up and excited, the people are portrayed getting ready to sing the Midsommervisen, a Danish hymn generally sung at midsummer eve celebrations.

BONUS: This is for the lovers of thrillers in cinema. Ari Aster’s 2019 movie Midsommar is a great combination of mystery, thriller, and horror. The movie offers a completely different perspective of midsummer celebrations in Sweden. It depicts the celebrations as part of a pagan cult and is suggested for people who are older than 18 years old. See the trailer here: