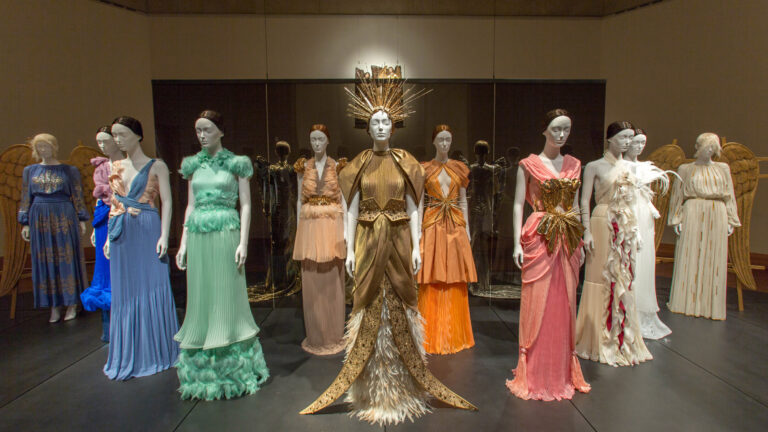 I am not Catholic. And I am not up on the latest fashions. Yet here I was, in the Metropolitan Museum of Art in New York City on Fifth Avenue with thousands of other fashionista museum-goers, enthralled by the Costume Institute’s spring 2018 exhibit ‘Heavenly Bodies: Fashion and the Catholic Imagination.’

Music from Samuel Barber, “Agnus Dei, Op. II (from Adagio for Strings),” 1936 played spiritually in the background, setting the mood. The simple melody of this beautiful piece, which was played at the funerals of Franklin Delano Roosevelt, Albert Einstein and Grace Kelly, and was used in the movie ‘Platoon,’ mesmerized me and brought me close to tears.

The exhibit, which opened on May 10, 2018 and will be closing on October 8, 2018, is unlike any other I have ever seen. Normally, an exhibit is given its own series of rooms, apart from the permanent collection. In this instance, the Costume Institute of the Met decided to immerse the content of this exhibit, one beautiful gown after another, in its permanent collection. These gowns, and the manikins that wore them, were displayed in the Mary and Michael Jaharis Galleries for Byzantine Art, the Medieval Galleries, The Robert Lehman Wing, and the Anna Wintour Costume Center. According to the Exhibition Overview from the Metropolitan, there were “more than 150 ensembles, primarily womenswear, from the early 20th century to the present.”

The emotional impact of presenting the gowns in this environment was to more intimately connect these gowns with their Catholic roots. Many of the gowns were secular; others were made for religious purposes. Yet the inspiration for all the gowns was the same. The exhibit has gotten some criticism for using sacred Catholic images to make a fashion statement, but the Vatican approved the exhibit and contributed to it.

The Metropolitan Museum on its website describes ‘Heavenly Bodies’ in the following way:

The thematic exhibition features a dialogue between fashion and masterworks of medieval art in The Met collection to examine fashion’s ongoing engagement with the devotional practices and traditions of Catholicism. A group of papal robes and accessories from the Vatican serves as the cornerstone of the exhibition, highlighting the enduring influence of liturgical vestments on designers.

The Byzantine room featured jackets as well as gowns. For example, a leather jacket by Gianni Versace from the spring and summer of 2018 melds the secular with the spiritual. Black and silver metal studs, polychrome crystals, bugle beads and seed beads are richly and colorfully displayed against the black leather of the jacket. The crosses create a serene feeling on the one hand; at the same time, the crosses appear to be moving through space. The religious symbolism and the secular symbolism of the leather jacket coexist as part of a more nuanced whole. One can enjoy the cut and style of the jacket in purely abstract terms, or one can meditate about a new reality that one can discover by combining these two elements, in the same way that the combination of hydrogen and oxygen produces a water molecule that is very different from its atoms.

This is true with the other designs as well. Elsa Schiaparelli’s ‘Cape,’ from 1938 is autobiographical, also using religious iconography such as a sacred heart, against a black background. The simplicity of the shape of this black wool cape is stunning, but the iconography feels more important in this case than the design.

Christian Lacroix’s ‘Gold-Gotha’ is spectacular, with the gem-studded cross much larger on its dark, silk-wool background. The size of the cross sends a message that is difficult to escape. The interplay of colors is breathtaking, the image so powerful that it was more difficult for me to see the cross as an abstract form.

And then there were the gowns. One ensemble was more beautiful that the next. There were the soutanes, described by the Met as “the essential garment for both daily and formal dress of the secular clergy,” also known as a cassock. The ensemble of Raf Simons provides examples of this. I was moved by these designs even though their religious significance had not been known to me.

In the middle of all this was a painting by a Master of Saint Augustine called ‘Scenes from the Life of Saint Augustine of Hippo.’ Because of this exhibit, I paid closer attention to the garments that were lovingly rendered in this painting. I paid more attention to the folds of the cloth and to the designs. I became more aware of the significance of the colors. This is a painting that, prior to this exhibit, I would have looked at, admired, and then walked past in a matter of seconds because I was not particularly drawn to the subject matter of the painting. Now, in this context, I lingered in front of it, and lingered in front of the gowns that were inspired by the clothing that was depicted in this painting. This was also true for the sculptures from the permanent collection that were in the rooms of this exhibit. I paid more attention to them as well, noticing the passion in the hands of the sculptors who made them.

I had always felt that I needed to be moved by Christianity before I could be moved by Christian art. The two seemed irresistibly intertwined. I am sure that one of the aims of the artists involved was to promote this connection. However, one of the lessons of this exhibit for me is that when someone is passionate about almost anything and is able to convey that passion in an honest and direct way, I will be moved by those feelings.