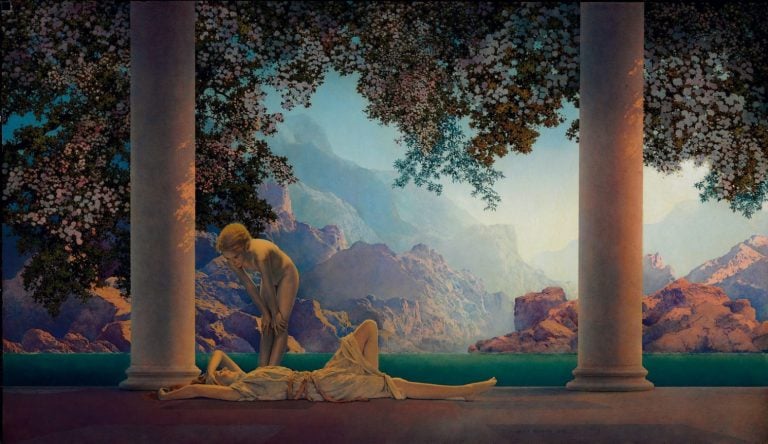 The Story of Girl at Mirror by Norman Rockwell

Maxfield Parrish was an accomplished American painter and illustrator in the early 20th century. He was an important figure in the golden age of American illustration, along with icons such as Thomas Eakins or Norman Rockwell.

Parrish enjoyed a long career and tremendous economic success. For example, he became the highest-paid commercial artist in the United States by the 1920s. He was well-known for his illustrative works of fantastical subjects, as well as his idealized neo-classical imagery. The striking compositions are distinctive due to their bold tones and saturated hues that result in an ethereal, whimsical effect. Parrish admitted that his true passion lay in rendering landscapes and he incorporated elements of landscape art in many of his works. A shade of cobalt blue has been named Parrish blue after this iconic artist.

Parrish was raised in a Quaker society in Philadelphia, Pennsylvania. He was given the name Frederick Parrish, but later adopted his paternal grandmother’s maiden name. His father, Stephen Parrish, was a painter and etcher, and was possibly Parrish’s greatest influence and first foray into the art world. Maxfield showed an early acumen for painting and was encouraged by his parents to pursue his natural talent. In his travels to Europe with his parents, he found profound inspiration in the works of the Old Masters’ and also in classical architecture.

Parrish met Lydia Ambler Austin in Drexel and the couple got married in 1895. However, of their four children, only his youngest child, Jean, pursued an artistic career. Parrish became involved with his son’s nanny, Susan Lewin.  His wife left him in 1911 and Parrish moved into his studio with Lewin, who became his lover and lived with him until 1960. Letters also hint to the existence of at least one secret lover.

In 1900, Parrish fell seriously ill and contracted tuberculosis, which was shortly followed by a nervous breakdown. This period marked a turning point in his work, as it was during this time that he began mixing oils and glazes to achieve the vibrant hues that he became so well-known for.

Parrish moved to Arizona during this time to recuperate and found great inspiration in the canyons and the striking southwestern imagery. He embarked on a series of sunrises and sunsets in brilliant orange hues contrasted with shadows of blue and purple.

A key component of Parrish’s signature style was the remarkable use of light and color. He was the proponent of many innovative artistic techniques that involved the use of glazing. His artworks involved a painstaking process involving numerous layers of glazing applied in an alternating fashion with a pure pigment of bright varnish. Therefore, the result was an incredibly saturated and mesmerizing effect. Parrish would also superimpose pictures of subjects onto his canvas and then cover them with glaze to create a striking three-dimensional effect.

Although Parrish was known for his illustration, his true passion lay in landscape art. He experimented with landscapes throughout his career and imbibed elements of landscape artistry into his industrial commissions. It was only after he was comfortable in his financial success that he turned exclusively to landscapes sans the figurative, as this was less lucrative. The financial freedom allowed him to develop his signature technique. The Old White Birch depicts the distinctive tree native to Parrish’s home state of New Hampshire and is considered one of the best works of his career.

In his later years, Parrish developed severe arthritis that prevented him from painting. His final years were spent in a wheelchair and he passed away at the advanced age of 95 in New Hampshire.

In his long career, Parrish left behind a sizable legacy of artworks. For example, he created murals, advertisements, book illustrations, greeting cards, and magazine covers. Some of his important clients included Brown & Bigelow Publishing Company, candy manufacturer Clarence A. Crane, Harper’s Bazaar, Life, and General Electric, to name a few.

Daybreak was perhaps Parrish’s best well-known work. It sold in 2006 for $7.6 million and is iconic for its influence on pop culture of the time. Variations of this painting were used in a Michael Jackson music video, a movie poster for The Princess Bride, and a Moody Blues’ album cover to name a few.