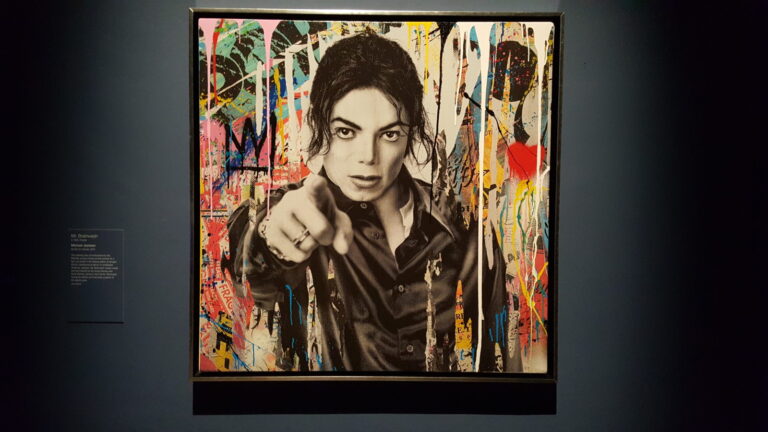 When I hear the phrase the King of Pop only one name comes to my mind. I’m sure the younger generation may argue, but for me, it is still Michael Jackson. In the year of what would be his 60th birthday National Portrait Gallery in London offers us a treat in the form of an exhibition ‘Michael Jackson: On the Wall’, curated by Dr Nicholas Cullinan. It brings together works by over forty artists, all inspired by Michael Jackson, in the attempt to document his influence on contemporary art.

As expected the exhibition starts with a bang. As soon as we enter we are faced with the final commissioned portrait of Jackson. Completed after his death in 2009, it both opens the exhibition and become its focal point, as we have to pass by it more than once. In a way it summarizes the main message of the show – maybe not the most innovative one but presented in a way that forces us to contemplate it – Michael Jackson has become an icon, he was more than human, he achieved immortality.

The mood in the first rooms is set by Susan Smith-Pinelo’s work ‘Sometimes’. A video of her cleavage bouncing incessantly to ‘Workin’ Day and Night’ from Jackson’s ‘Off the Wall’ record. The song follows us as we go through Jackson’s early years. The rooms include works inspired by his first ‘Rolling Stone’ cover and his lyrics, teenage passionate portraits, a beautiful, funny and tragic installation P.Y.T. (‘Pretty Young Thing) by Appau Junior Boakye-Yiadom.

From here on the attention shifts drastically from the person to the image and what it stands for, Jackson may have been a famous before, but Warhol’s portraits sealed this status as an icon. There is no mistaking who we are looking at. The image is now public property, to be seen, digested, reproduced and recreated indefinitely. Michael Jackson achieved a more-than-a-human status which he continued to build on further in his career.

Next rooms focus on Jackson’s image and what meanings it conveys, how it is interpreted by various artists. David Hammons in his work ‘Which Mike do you want to be like..?’ mocks the limited options available to black teenagers: you can be Jackson, Tyson or Jordan. Jackson’s heritage is inspiring to many works on the exhibition, some artists present him as the ultimate exemplification of success, others set him in a wider context of post-colonialism. Some artists focus on how Jackson impacted them personally. It is a fascinating mix of individual reactions and inspirations.

As Jackson’s image and iconography grew, so did his recognisability. His influence on music, fashion and choreography cannot be denied. One thing we don’t often think about, and which this exhibition made me realize, is to which extent we know all the details of his image. One tiny detail is enough to recognize that it is him. Several rooms focus on this aspect – Jackson is dissected into the smallest parts and remains recognizable. It reminded me of the dismemberment of the saints to turn their bodies into relics in the past centuries.

Clearly, the saint association is not out of place as we progress to the series of David LaChapelle’s photos of Jackson, representing him as American Jesus. LaChapelle sees Jackson as a victim of his own fame, an artist devoured by his audience, persecuted and killed. In this light, the comparison to Jesus may still be controversial but does not feel that far-fetched.

In the next room, however, there is an artwork bringing up the topic that seems to be avoided throughout the whole exhibition, the elephant in the room. ‘Neverland’ by Jordan Wolfson, is a video showing a pair of blinking eyes floating in the otherwise white screen, the only sound we hear is the running water. The footage Wolfson used for this work is the 1993 broadcast Jackson made from Neverland, denying accusations of child molestation. The image, the sound and the facts put together make an impression that is hard to forget.

The Audience is King

To enter the last part of the exhibition we have to pass through a gate in the shape of Mike Ryden’s cover for ‘Dangerous’ album from 1991. Again, we only need to see Jackson’s eyes to recognize him and the cover seems to invite us to an eerie circus. The last rooms focus on how Jackson’s image lives a life of its own, irrespective of whether Jackson himself is alive or not. The icon became independent, became the property of the audience. It is the audience that keeps it alive and it is the audience that needs it.

The ultimate expression of this is the last piece of art we see, the takeover of an artist by the audience. In 2005 Candice Breitz created her work ‘King’. It is an installation consisting of 16 screens showing Jackson’s fans performing a capella the entire Thriller album in a professional recording studio, each of them recorded separately, yet here we see and hear them together. We see Jackson without Jackson, the icon attained freedom, separated from its source.

Michael Jackson: On the Wall is not really an exhibition about Michael Jackson. It is an exhibition about the image of Michael Jackson and its immense power to inspire. In a broader sense, it is also an exhibition about pop icons’ influence on art, a two-way relationship glorified by Andy Warhol and one that continues and resonates to this day. As we go through the rooms we progress from a deceptively cheerful start to darker and eerier spaces, where Jackson’s image takes a life of its own, where the connection between the person and public persona is severed to where he literally continues to exist through his fans and art he inspired. The ultimate idolatry.

To make our experience complete National Portrait Gallery created a trailer for the exhibition (that only proves how difficult task it is) and offers us a Spotify playlist.

Michael Jackson: On the Wall

Popular culture and art influence each other often, check out these articles: