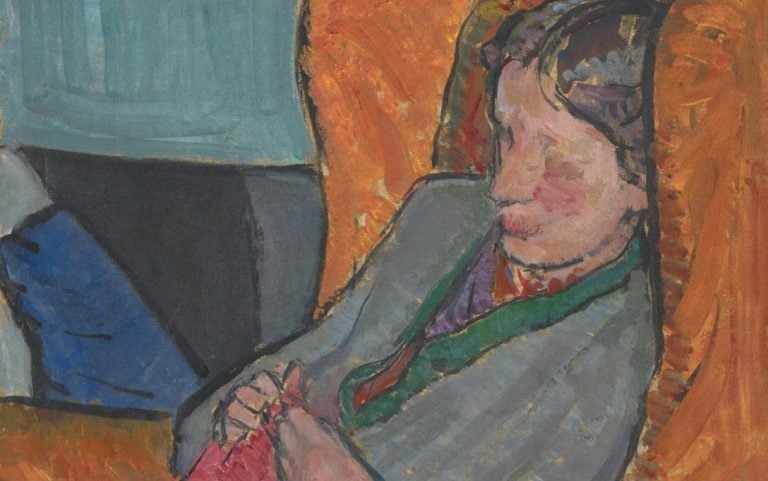 Rebellious, creative and productive. Three of the so many adjectives to depict the two very intelligent artists sisters Vanessa Bell and Virginia Woolf. This painting is a portrait of the revolutionary feminist writer Virginia Woolf by her largely underrated painter sister Vanessa Bell. Let’s celebrate the talent of Bell by looking closely at the painting that she made of her younger sister in 1912.

Vanessa Bell was born in London, UK in 1879. Coming from an upper-class family, she was homeschooled from a young age. Taking drawing lessons as a teen, the young Bell then studied painting at the Royal Academy of Arts in London. After she lost both of her parents, she decided to move to the Bloomsbury district of London in 1904. Moving to this new neighborhood, Bell took her sister Virginia with her. The two then became a part of the intellectual ensemble Bloomsbury Group. The group consisted of several writers, painters and critics of the day.

Vanessa Bell took big brave steps in her 20s such as moving house and engaging in an open marriage (with Clive Bell in 1907). Still, she was committed to domestic life all the same. She gave birth to three children and was very compassionate towards them. In addition, she was very enthusiastic about interior design and hosting dinner parties. Her free, independent and, back then controversial, queer-friendly soul found an outlet in all her artistic creations, from her paintings to home decorations.

Studying the biographies of the artists, it is safe to say that Bell and Woolf had a relationship with many ups and downs. However, they were very close and intimate at the same time. Woolf hinted at envy towards her sister’s area of expertise – painting, in a 1934 essay about Walter Sickert. However, Bell was always the first person to take charge of designing/painting the covers of many of Woolf’s books. This mild tension is channeled through this 1912 portrait as well.

Here, Woolf is portrayed in a dual manner. On the one hand, she is depicted in a very private and intimate setting, while knitting at home. This domestic safe space gives the painting a very familial and warm feeling. On the other hand, Virginia’s facial features are blurry and lack any important details. This, inevitably makes the overall feeling cold and distant.

A similar approach is present in the composition. The relatively empty setting consists only of a big comfy armchair in front of a bare wall. This empty atmosphere, however, is completed with the use of vibrant colors throughout the work. Orange and pink for heat, vibrancy and envy. Blue and green for calmness, discretion and unity. A few of the many notions to describe two of the most groundbreaking artists of the early 20th century.