Painting of the Week: Judgement Scene from Book of the Dead of Hunefer 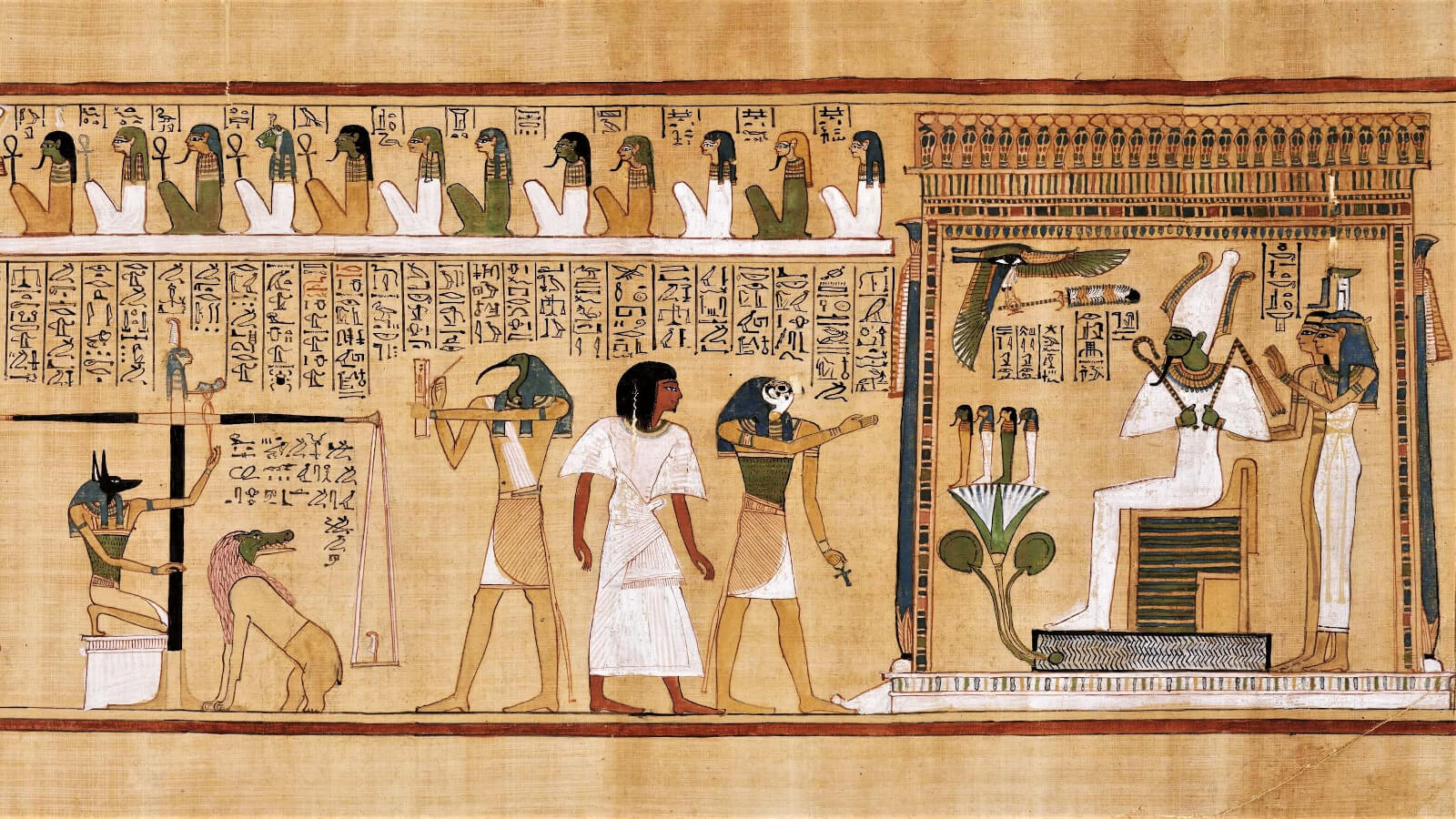 Death continues to be one of the greatest fears of human society. Since the dawn of recorded history through the centuries of plague, pestilence, and meeting our own modern global pandemic, death has always been a worry. It marks the end of life and forces cosmic questions such as: What is the purpose of life? Is there an afterlife, and if an afterlife exists, how does someone guarantee his or her place in it? The ancient Egyptians definitely believed in an afterlife, but they also believed that the afterlife was not a guaranteed experience. The deceased must avoid dangers and pass tests to become justified in gaining admittance into paradise. To aid the deceased on his or her journey, the ancient Egyptians created fabulously detailed Books of the Dead with magic spells and practical advice divided into chapters. One of the finest chapter examples is the Judgement Scene from Book of the Dead of Hunefer. It records the most dramatic moments in one man’s journey to enter the ancient Egyptian afterlife. What follows is Hunefer’s story captured on papyrus over 3,300 years ago.

The ancient Egyptians were obsessed with the art of dying well. They wanted to ensure their place in the afterlife and that it was as enjoyable as life itself. Hunefer was no exception to this desire, especially since he had a privileged and prosperous life. He was a royal scribe and steward to Pharaoh Seti I, who ruled during the 19th dynasty of the New Kingdom. Hunefer boasted many titles including Estate Overseer of Menmaatra, Overseer of the Cattle of the Lord of the Two Lands, and King’s Scribe. The era in which Hunefer lived was a period of renewed prosperity.  Like his own Judgement Scene, many fine works of art and calligraphy were created through private commissions. Every Book of the Dead was different–all custom-made. No two are identical examples. Over 200 known spells in cursive hieroglyphs could be individualized for inclusion in chapters with accompanying vignettes or miniature paintings. Hunefer’s Judgement Scene is one such chapter of his Book of the Dead. Because these funerary papyri were so long and had so many chapters, they were known by the ancient Egyptians as Chapters of Coming Forth by Day.

Hunefer’s Judgement Scene is Frame/Chapter 3 of his Book of the Dead/Chapters of Coming Forth by Day. The chapter measures 1’ 6” H x 3’ W (45cm H x 90.5cm W), resulting in a panoramic 1:2 aspect ratio. It is divided into two major registers–or horizontal levels–separated by defined lines. In the first register, in the upper left corner, kneels the adoring Hunefer in front of a pantheon of Egyptian gods. The gods are individually labelled and identified as Ra (immediately in front of Hunefer) followed by Atum, Shu, Tefnut, Geb, Nut, Horus, Isis, Nephthys, Hu, and Sia, and the personifications of the Southern, Northern, and Western Roads. These fourteen gods will act as supervisors and witnesses to the drama that unfolds below in the second register of Judgement Scene.

On the left side of the second register of Judgement Scene is the Theban scribe Hunefer holding hands with the jackal-headed god Anubis. Anubis is the ancient Egyptian god of embalming and the protector of the dead. He leads Hunefer towards the balance scale where he will perform the critical Weighing of the Heart Ceremony which will determine if Hunefer is “True of Voice” or worthy of eternal life. Hunefer’s heart sits on the left side of the balance scale weighing against the Feather of Ma’at (Truth) on the right side. The ancient Egyptians believed a person’s heart was the seat of emotions, intellect, and character. It was the organ thus representative of a person’s good or bad life. It was so symbolically important to the ancient Egyptians that it was one of the few organs remaining in the body after the famous mummification process.

If the heart weighed more than the Feather of Ma’at, then the heart indicated a sinful life ineligible to an afterlife. Sinful hearts that failed the test were immediately devoured by Ammit, the grotesque creature below the scale and sitting to the right of Anubis. Ammit is a female demon with a hybrid body. She is part crocodile, lion, and hippopotamus. She is a manifestation and combination of the three largest man-eating animals known to ancient Egyptians. Hence she was fearfully known as the Devourer of the Damned because anyone who had his or her heart eaten was deprived of an eternal afterlife. He or she was condemned to non-existence–a second but far worse death in the eyes of the ancient Egyptians. Judgement Scene captures the balancing act with Anubis adjusting the plumb-weight and Ammit looking eagerly for her next meal. The tension is almost palpable.

Standing to the right of Anubis, Ammit, and the scale is the ibis-headed god Thoth. Thoth is the god of writing, scribes, and magic spells. He stands facing the balance scene, holds a pen and a scribal palette, and records the test’s results. His face bears no emotion, unlike the demoness Ammit. He is simply an objective stenographer transcribing the proceedings before him. Thoth completes the Weighing of the Heart Ceremony in Judgement Scene. However, what does Thoth record? Does Hunefer’s heart weigh the same as the Feather of Ma’at, thus proving he is worthy of an afterlife, or does he face eternal oblivion?

Hunefer passes the test!  Standing to Thoth’s right is Hunefer again but with happiness that anyone who has ever passed a difficult test can understand. There is a sense of euphoria, self-congratulations, but more importantly, relief. The test is over, and the anxiety can end. Hunefer is clearly delighted with his test result because his face has a more animated expression compared to his image earlier in the scene on the far left. His eyes are wide, and his lips are curled in a closed smile. Pride can almost be felt in his heart. Judgement Scene is going to deliver a happy ending!

In Judgement Scene, the falcon-headed god Horus stands to Hunefer’s immediate right and points with his right hand towards the seated Osiris, god of the dead, afterlife, and agriculture. Horus is the god of kingship and the sky and is the son of the god Osiris and the goddess Isis. Horus escorts Hunefer to meet the divine family and to be welcomed into the afterlife.

To the far right of Judgement Scene sits the deathly green-skinned Osiris. He is enthroned within his judgement hall at the center of his divine court. Before him are the four sons of Horus standing on a large lotus flower that grows from a pool of water beneath the throne of Osiris. Behind Osiris are his sister-wife-goddess Isis and sister-goddess Nephthys. They hold their left hands in veneration of Osiris and in welcome of Hunefer. Osiris holds the crook and flail symbolizing his kingship and his control of the fertility of the land. He is king over the Fields of Reeds, or paradise, which is the ancient Egyptians’ ideal vision of an afterlife. It is a bountiful agricultural land where the Nile River regularly rises and famine does not exist.

Judgement Scene from Book of the Dead of Hunefer is certainly a complex painting with its vignettes and passages from spells to ensure a successful weighing of the heart. What is incredible to consider is that Judgement Scene represents only one chapter, one stage, one obstacle of Hunefer’s long journey into the afterlife. There are more dangers he must face, but Judgement Scene captures the most dramatic of his challenges. It is beautifully illustrated with bold lines and vibrant colors. It has a strong formality in the figures’ rigid stances and angular frames. Judgement Scene marks the return to a more conservative and traditional style of ancient Egyptian art and rejects the flexible, curvilinear, and liberal style of the Amarna Period during the previous 18th dynasty. The scene is finely crafted, and paying the expert scribes and master draftsmen who created it would have easily cost Hunefer six months of wages. Since it was so expensive, it is believable that Hunefer, a formally trained royal scribe, would have written some parts of his own Book of the Dead to offset the overall cost. The less work others had to complete, the more he would have saved. All it would have cost Hunefer were his materials and his own time– but not other people’s wages.

No matter the methodology of how Judgement Scene from Book of the Dead of Hunefer was created, it can be agreed that it is a masterpiece of ancient Egyptian art. It is expertly rendered, and it is wonderfully preserved after the three millennia since its creation. When the British Museum acquired Judgement Scene in 1852 and placed it on public display, it inadvertently fulfilled Hunefer’s desire to achieve immortality. His artwork has been viewed by the general public for over 160 years, and his name has been spoken by countless visitors as they read the labels describing his papyri. The ancient Egyptians believed that to speak the name of the dead was to make them live again. Well, Hunefer, you live every day, my friend, because your name continues to be said through the fabulous artistic legacy you left behind. Enjoy the afterlife, Hunefer. May we all be so lucky when we, too, leave our mortal shell and pass into the unknown.

If you find any joy and inspiration in our stories, PLEASE SUPPORT
DailyArt Magazine with modest donation. We love art history and we want to keep going with writing about it.
$5 $10 $25 $50 $100 MONTHLY
Related Topics:British Museum, death, egypt, featured