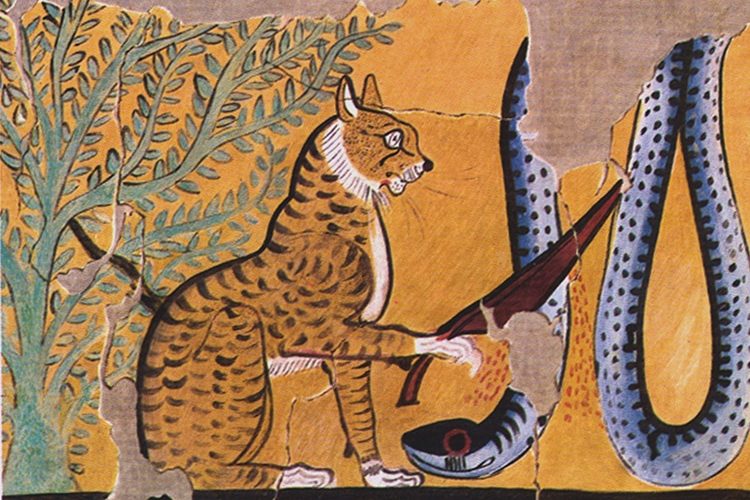 The Ancient Egyptians revered cats of all kinds and honored them in their art. From servals to the mighty lion, cats were seen as powerful forces for both protection and destruction. According to their mythology, the sacred cats of Ancient Egypt took many forms, from domestic statuettes to depictions of their many deities who were thought to take different feline forms. Cats were so highly prized that the sentence for willfully harming a cat was death.

The Ancient Egyptians were familiar with a variety of indigenous cats, big and small. North Africa and the Near East were home to different species of the lion while south of Egypt there were leopards and cheetahs. The African wild cat could be found living in the deserts and marshes. The serval – a particularly striking and pretty wild cat – was poached from other regions of Africa and kept as an exotic pet in Ancient Egypt.

We all know that cats are amazing hunters, so it is no surprise that they were prized as defenders against unwanted rats, mice, and snakes. We can also see from depictions of cats in Ancient Egypt, that over time they became domesticated. There are cats under chairs and on laps, adorned with jewelry and collars, and there are many examples of faience and alabaster figurines and jars showing that cats were very much loved.

For a long time, it was believed that the Ancient Egyptians were responsible for the domestication of the cat. However, a 9,500-year-old cat was found on the island of Cyprus, buried with its owner, revealing that cats were domesticated and seen as sacred much earlier.

The Ancient Egyptians had a complicated spiritual system with many deities. It was the birth of the sun god Ra, however, that was the most significant event in Egyptian mythology. Ra merged with the primeval forces of creation to form the universe. The Ancient Egyptians believed that the morning sunrise was the daily rebirth of Ra. He would then travel the breadth of the sky in two solar barques: the morning boat, Mandjet, and the evening boat, Mesektet.

Ra Had Many Forms

He took the form of the scarab beetle, Khepri, in the morning when he would roll the sun into the sky. During his passage across the sky, it’s possible that he merged with Horus to become Ra-Horakhty, a falcon-headed deity.

At night he assumed a ram-headed form, Khnum, and made his journey through the underworld where he merged with Osiris, the god of the dead. He was reborn every morning to begin his journey again. Khepri, Ra-Horakhty, and Khnum are all aspects of Ra. He was the sun and creator, the giver of life and warmth, the god of kings and the sky, and the semblance of order.

What Has Ra Got to Do with Sacred Cats?

Ra has a lot to do with sacred cats in Ancient Egypt! As the god of order we could probably guess that he would have to have an opposite. This was the serpent, Apophis, who represented chaos. Ra fought an epic battle against Apophis in which he assumed the form of a gigantic male cat. Cats were ferocious killers, so this was a good strategic move for Ra to make. He thus defeated chaos with the help of his daughter, Bastet, cutting off the serpent’s head.

The Eye of Ra

The Eye of Ra is a feminine aspect of his identity. It is also the instrument of his retribution, sent down to punish and destroy his enemies. In Ancient Egypt, divine female rage was something to be feared, and this is where we meet the sacred cat goddess Bastet.

Bastet was originally a formidable goddess associated with Lower Egypt. She was the Eye of Ra, and his first-born daughter. She became alienated from her father and wandered the deserts in the form of a lion. In this form she could even annihilate other deities. After she was reunited with her father, she assisted him in his battle against Apophis.

Bastet was eventually superseded by Sekhmet in Ancient Egyptian spiritual culture, and her image softened. She became a goddess of fertility, domesticity, protection against disease, and a keeper of women’s secrets rather than the vengeful Eye of Ra. Over time her leonine form also disappeared and was replaced by that of the domestic cat that we know today. Her most common appearance is as a sacred cat-headed goddess holding a sistrum in one hand and an aegis in the other.

One of the most famous depictions of Bastet in full cat form is the Gayer-Anderson Cat, a bronze figure probably from a temple, dating from ca. 600 BCE. This is a particularly fine example, probably made as an offering by someone who could afford a more elaborate sacred cat sculpture.

Ra created two main feline goddesses as his daughters, the second of which was Sekhmet. She was a powerful goddess, originally associated with Upper Egypt. Upper Egypt conquered Lower Egypt and thus there was a shift in terms of significance between these two goddesses. Sekhmet assumed Bastet’s role of aggression and fierceness, while Bastet, as we have seen above, became a more domiciliary sacred cat throughout Ancient Egypt.

Sekhmet was a fearsome warrior goddess in leonine form and was also the Eye of Ra. She was also thought to have made the deserts with her breath and to be the protector of Pharaohs.

As a deity she was solar, usually bearing a solar disk and a uraeus. Her importance was such that she stood in the solar barque to defend Ra from the Apophis serpent. Sekhmet is also an instrument of divine retribution. Her arrows were personified as seven messengers who brought destruction, plague and suffering to humanity. By contrast, she was also the patron goddess of medicine. Like other feline goddesses, she was in possession of both destructive and restorative powers. Later on she was personified as being endowed with the even more aggressive aspects of the greater goddesses Hathor, Mut, and finally Isis.

The Eye of Ra and Royal Power

Cats were generally seen as emblematic of the sun and therefore of Ra and of the Eye of Ra. This symbolism translated well when it came to representing power in the realm of Kings and Pharaohs. Since they were seen as intermediaries between ordinary men and the gods, the lion became a symbol of royal power and the Eye of Ra a symbol of royal protection.

Female rage was especially feared, so sacred cats in Ancient Egypt who were depicted as leonine goddesses were more important than leonine gods. The lion was also a component of Bes, Tawaret, and of the Griffin and the Sphinx. The latter two were perceived as magical guardians of considerable power.

There Were Many Other Cat Forms

There were other lesser gods and goddesses in sacred cat form. Aker, or Ruty, was a double lion. These twin lions of “yesterday” and “tomorrow” guarded the horizon. This was an important occupation because the horizon was a place of regeneration for both deities and kings, as well as where Ra appeared and disappeared each day. Aker was also naturally associated with death and rebirth, and could be found on embalming tables, biers and coffins.

According to ancient temple rituals the body of Osiris was guarded by four lioness goddesses: Wadjut, Sekhmet, Bastet and Shesmetet.

The Pyramid Texts state that one of Mafdet’s roles is to help a dead king by clawing out the eyes of evil snakes. She was depicted as having the head of a cat or a mongoose, later depictions of her are in the form of a cheetah or lynx. Another role is of the divine executioner, hunting and killing the enemies of Ra.

In the Coffin Texts we find Pakhet the Great, huntress by night and a goddess of war. She is depicted as a lioness or a panther, and is also deadly to snakes. Her name means “one who scratches”. She rides upon the Barque of Pakhet, itself lion-headed, as an escort to the Solar Barque.

Cats were protected and worshiped, personified as deities, and believe it or not, also mummified! There are many examples of cats found throughout Egypt either buried with or very close to their owners. According to Herodotus (a Greek writer and the first historian, 484-425 BCE), members of a household in which the family cat had died would all shave off their eyebrows. When the eyebrows grew back, it meant that the period of respectful mourning for the cat was finished.

Mummified cats were often dedicated to the goddess Bastet at her temple in the city of Bubastis. However, the significance of having your cat with you in death went further still. It was believed that the cat would continue to protect you in the afterlife as it did in life.

The Ancient Egyptians Also Had a Sense of Humor!

I like cats and I’m sure that many of you do too. A fascinating animal, the cat has earned itself an important place in culture, literature,...