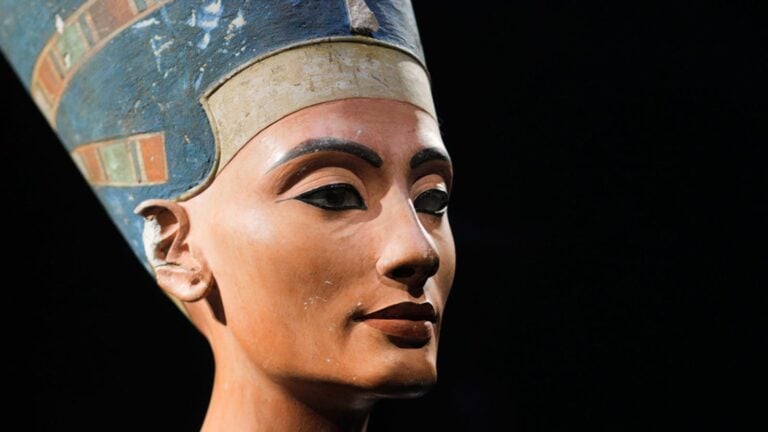 The bust of Queen Nefertiti housed in Berlin’s Neues Museum is one of Ancient Egypt’s most famous works of art. A prime example of ancient artistry, this icon has been called “the most beautiful woman in the world”. Hypnotizing audiences since it went on display in 1923, the statue gives insight into the enigmatic queen and continues to generate controversy and debate in art and politics.

Nefertiti’s bust is the sole work of art in the dimly lit room. She stands 48 cm (19 inches) tall and weighs 20 kg (44 lbs). Positioned slightly above eye level, the viewer gazes up at her, contributing to the power and regal feeling of the piece. The statue is delicate, elegant and very symmetrical, with a visual flow guiding you from the top of the crown down to the long neck. The naturalism differs from earlier, more formal and rigid Egyptian art.

The estimated date of the statue’s creation is 1340 BCE during the Amarna Period. There are no inscriptions but Nefertiti was identified by her trademark blue flat-top crown with the uraeus (cobra), which is missing. The core is limestone covered with plaster, allowing for the exceptional molding and detail around the face.

Not much is known about Nefertiti, whose name means “the beautiful one has come forth”. One hypothesis is that she was a Syrian princess. She is part of the 18th Dynasty of Ancient Egypt. Her husband, Pharaoh Akhenaton was infamous for overhauling Egyptian religion – transforming it from polytheism to monotheism with the focus on the Sun God, Aten. He also had the Egyptian capital moved from Thebes to a new site at Amarna. Nefertiti and Ahkenaton’s relationship was also depicted in a new way. In works of art Nefertiti is shown in equal status to the king, perhaps functioning as more of a co-ruler, as opposed to the traditional role of queen. Her death is as mysterious as her origins. Twelve years into the Amarna period, she disappears from the records.

The Amarna Period (1353-1336 BCE) saw a real change in Egyptian Art. Prior works were very rigid, formal, idealized, depicting little individuality of the subject. Amarna art is still very stylized but plays much more with naturalism, emotion, and fluidity. Bodies, even those of the men, become more rounded, soft and formed. Theories propose that Akhenaton’s health issues altered his mind and shape of his body, inspiring the new physical depictions.

German archaeologist, Ludwig Borchardt, uncovered Nefertiti’s bust in 1912 in the studio of the royal sculptor, Thutmose, in Amarna, Egypt. An agreement with the Egyptian Antiquities Service allowed Borchardt to legally transport the statue to Germany. However, since the statue’s first public viewing in 1923 the Egyptian government has fought for its repatriation.

What makes this piece unique is that it was not intended for a tomb, like much of Egyptian art. This is a modello, a template to use for other works of art. Apart from the missing left eye, damaged ears, and uraeus, the statue is in excellent condition. This as well as the very modern and naturalistic style, and controversies surrounding her skin color led a few historians to proclaim the statue as a modern forgery. Data analysis and tests have proven its authenticity.

The mystery that surrounds the statue is one of the aspects that keeps Nefertiti so intriguing and fascinating. This statue is admired, studied and copied. The debates and insights that she still inspires over 3000 years after her creation, shows how relevant and timeless these issues remain, and what an important role art plays in fueling these discussions.