Masterpiece Story: Fowling in the Marshes 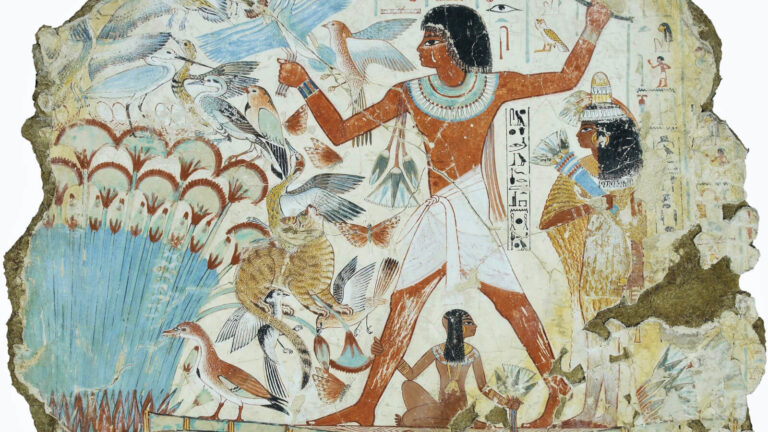 Ancient Egypt. The famous land of Tutankhamun evokes popular images of pyramids, mummies, and tombs. It left an artistic heritage that is still admired and appreciated thousands of years later. Tomb paintings are part of this artistic heritage, and reached an aesthetic high-point during the New Kingdom. Fowling in the Marshes is such an example as one of the most famous tomb paintings from ancient Egypt. Through its beauty, it explores three subjects vital to ancient Egyptians: rank, religion, and recreation. Let us explore an Egyptian masterpiece. Let us explore an Egyptian afterlife.

Fowling in the Marshes

The history of ancient Egypt is long and complex with periods of stability and periods of turmoil. The New Kingdom was a significant period of stability that lasted 480 years from approximately 1550 to 1070 BCE. The New Kingdom was a golden age when Egyptian society experienced unprecedented wealth and prosperity. Wealthy rulers like Hatshepsut, Amenhotep III, and Ramesses II constructed large tomb chapels to ensure they would receive prayers and offerings from the living. Royalty and nobles followed their example and built their own fabulously painted chapels on the west bank of the Nile near Thebes. Nebamun, a noble, commissioned his tomb chapel around 1350 BCE and had Fowling in the Marshes as one of his many decorations.

Fowling in the Marshes is a beautifully rendered scene full of fine lines, sharp contrasts, and bold colours. It features Nebamun standing on a papyrus boat, his wife standing to his right, his daughter sitting beneath him, and his cat hunting to his left. Nebamun was a government official under Pharaoh Amenhotep III as a “Scribe & Counter of Grain”. He and his family, like many affluent city dwellers, are enjoying a hunting expedition in the marshes of the Nile. Pleasure is the order of the day.

Nebamun is the main subject of Fowling in the Marshes. He is the largest figure in the scene and stands with his family on a papyrus skiff. Nebamun wears a decorative collar of red, white, and blue beads; and also wears a loincloth of white linen. He boldly strides forward into the thrill of the hunt. Nebamun holds in his left hand a throwing-stick used to hit and kill birds. He also holds in his right hand three decoy herons used to lure and attract birds. With his prowess and hunting tools, Nebamun’s fowling success is imminent. His success is also a metaphor for his triumph over evil because the wild fish and birds symbolize chaotic forces, an evil in the Egyptian psyche.

Hatshepsut is Nebamun’s wife and she stands on the right side of the painting. She is depicted as an elegant lady with her luxurious wig, fine clothing, gold jewelry, and scented cone on her head. She is painted on a smaller scale than her husband, not because of a physical smallness but because of a conceptual smallness. In ancient Egyptian art, the social ranks of people determined their physical sizes. Pharaohs, at the peak of society, were always depicted the largest. Then lower down the ranks the order continued with noblemen larger than noblewomen, and nobles larger than commoners. Therefore, with Hatshepsut as the second largest figure in the scene, she is the second most important person. Her importance stems as being Nebamun’s wife and as a priestess to Hathor, the goddess of love and music. Hatshepsut holds in her hands a sistrum and a menat which are musical instruments she would have used in the temple of Hathor. They are both percussion instruments and make a soft tinkling sound when rattled. Therefore, Hatshepsut is the epitome of the refined lady-priestess through her attire and instruments.

Nebamun’s unnamed daughter is the smallest figure in Fowling in the Marshes, and is therefore the least important. She sits crouched on the papyrus boat underneath her father’s legs. Her placement is unusual, but ingenious. The triangular space created by Nebamun’s legs and the boat is a perfect frame to insert the tiny daughter. Without her insertion into the scene, a large and awkward void would have been created in the middle of the painting. While socially the daughter is not as important, compositionally the daughter is very important.

The household cat is lavishly painted on the left side of Fowling in the Marshes. It is catching the fleeing birds that Nebamun has disturbed with his throwing-stick and decoy herons. The cat is energetically grabbing, biting, and jumping through the marshes. Its coat is finely painted and individual hairs can been seen amongst its outline. Important to note is the cat’s gilded eye. The gilded eye is the only known example of gilding to be found on a Theban wall painting. Because of this special detail, many scholars believe that the cat could represent Ra, the sun god. Further adding credence to this theory, is that the cat hunts the enemies of light and order represented by the wild birds. Overall, the cat is the most fascinating creature amongst Fowling in the Marshes with its fusion of religious symbolism and naturalistic depiction.

The plants of the Nile are depicted on the far left side of Fowling in the Marshes with their papyrus reeds and lotus flowers. The lotus flowers are painted in triangular profile alternating between closed buds and open blooms. This patterned arrangement is not naturalistic, but it is beautiful. The accompanying hieroglyphs say it is a “feast for the eyes” and it certainly is a feast by combining natural beauty and planned sequence. The flowers’ planned sequence is another example of order conquering chaos, and it highlights the marches’ religious significance because Horus, the sky god, was secretly born and raised in the Nile’s marches.

Hieroglyphic writing was the formal language of the ancient Egyptians. Hieroglyphs were a complex combination of icons, syllables, and alphabets with over 1,000 distinct characters. Just like the pyramids, hieroglyphs are synonymous with ancient Egypt and are found everywhere in ancient Egyptian art. Fowling in the Marshes is no exception and has 8 columns of text surrounding the image. Nebamun and Hatshepsut listed their names amongst the hieroglyphs alongside descriptions such as “…enjoying himself and seeing beauty…” and “Rejoice, see the beauty in the place of the eternal repetition of the lifetimes!” The hieroglyphs solidify the vision of an idealised afterlife held by Nebamun, Hatshepsut, and ancient Egyptian society.

Fowling in the Marshes is a tour de force of ancient Egyptian art. Its fluent use of delicate lines, bold patterns, and vibrant colours make it visually striking to behold. It explores the ideas of rank, religion, and recreation through its use of scale, symbols, and metaphors. The hieroglyphs emphasize its messages of both beauty and security. In ancient Egypt there was a saying that “To speak a man’s name is to restore him to eternal life”. Through Fowling in the Marshes, Nebamun and Hatshepsut are restored to the eternal life they desired. Let their afterlives be as beautiful as the painting they commission. This is an Egyptian masterpiece. This is an Egyptian afterlife.