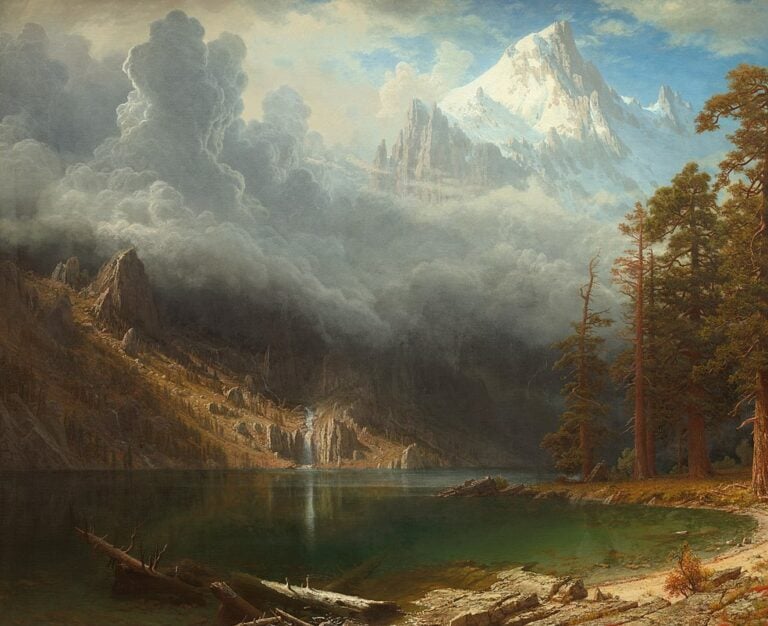 The beautiful state of California is home to some of the most geographically diverse topography. This makes for the most breath-taking vistas. It has immaculate beaches of the coastline and pristine lakes. Sprawling deserts, and mountain ranges lie scattered throughout the state. There is a place for every kind of nature lover in California. The divine beauty of the landscape has inspired numerous works of art. Albert Bierstadt, Guy Rose, and William Keith are three of the many notable artists responsible for sharing the California landscapes through their artworks.

Scottish-born artist, William Keith immigrated to the United States as a child. He spent his teenage years in the boroughs of New York. Later, in 1859 he moved to San Francisco to pursue a career as an engraver. However, although he began drawing early on, his introduction to watercolors was the result of the influence of his first wife, Elizabeth Emerson.

Keith gave up his professional career as an engraver and instead turned full-time to watercolors. Here he achieved considerable success. As a result he became a prominent member of both the Bohemian Club and the San Francisco Art Association. In addition, he received a significant commission from the Northern Pacific Railroad to paint scenes along its routes in the Pacific Northwest. This led to the financial stability that allowed him to travel and hone his art skills. As a result, he traveled to Europe and trained alongside Dusseldorf romantic landscape painters in Germany and the Barbizon School in Paris.

Upon his return stateside, Keith became acquainted with another famous Scottish immigrant, John Muir. The pair quickly became life-long friends. They inspired each other and took many camping trips together throughout the wilderness of California. As a result of these trips, Keith created many breath-taking paintings of California landscapes.

Unfortunately, a significant portion of Keith’s oeuvre was destroyed along with his studio in the fires following the catastrophic San Francisco earthquake of 1906. Despite this great loss, Keith remains a revered icon of California’s art history.

Albert Bierstadt was a 19th century German-American artist who distinguished himself by creating landscapes of the American West. He was born in 1830 in Solingen, Prussia, and spent his early years in Massachusetts. Although self-taught, in his youth he provided drawing lessons to others. However, he eventually went on to obtain a formal art education in Dusseldorf. His time in Germany was transformative both professionally and personally. Upon his return from Europe, he traveled extensively in the Western region of the United States. Shortly thereafter he began to exhibit the series of “Western” paintings which would gain him acclaim.

During his travels, Bierstadt visited some of the most picturesque California landscapes. On the way he created an exceptional visual record. He camped in the Yosemite Valley together with esteemed journalist and explorer of the time, Fitz Hugh Ludlow. Yosemite Valley is the home to ancient sequoia, the largest-known trees. They have an average height of around 180 ft and average diameter of 25 ft. Just like many other people when they first see them, Bierstadt was in complete awe of their majesty.

Although successful in the early part of his career, he was largely forgotten during his later years. He spent his final years in New York and passed away in 1902 at the age of 72.

Guy Orlando Rose was a California native and the son of a prominent California state senator. He spent his childhood on an idyllic ranch and vineyard in the San Gabriel Valley. When he was 9-years-old he suffered an unfortunate hunting accident. As a result he was forced to spend an extended period of time recuperating. However, as is true of many artists, this time of convalescence gave the young Rose a chance to explore his remarkable talent for watercolors and oil paints.

Around 1888 Rose attended the San Francisco Art Association’s California School of Design. Later, he enrolled at the Académie Julian in Paris where he associated with other esteemed artists. Rose also traveled significantly, both within the United States and abroad. In addition, along with his wife, he purchased a home in Giverny, France. The works from this period show the distinct influence of Claude Monet with whom he also became acquainted. Eventually, Rose returned to Los Angeles and made Pasadena his home.

Some of Rose’s notable renderings of California landscapes depict serene images of its coastline. He spent his later years serving as an instructor and a director at the Stickney Memorial Art School in Pasadena where he breathed his last breath in 1921.