Roman Holidays: Italian Landscapes Through the Eyes of Russian Artists 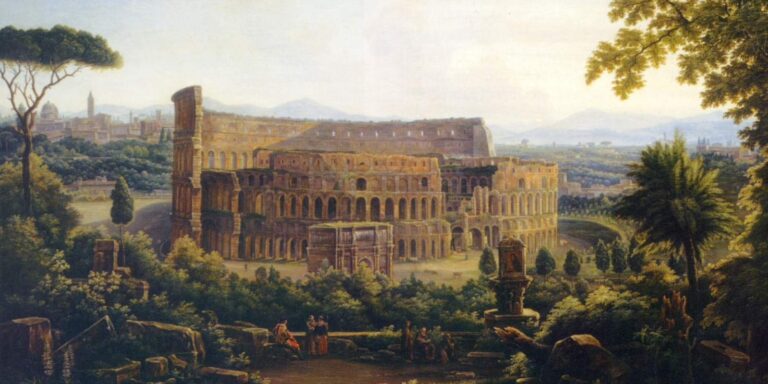 It is well known that Italy is a motherland of world masterpieces. Renaissance paintings, baroque architecture and Italian opera are the children of Italy. From the first decades of the 18th-century, the Russian emperor, Peter the Great, sent young artists to Italy for educational purposes. At the same time, Italian painters and architects were hired to design and paint palaces in St. Petersburg. Thus, the “window on Europe” was opened more widely to Italy than ever before. So, let’s see some impressive Italian landscapes and the characters that brought some fresh air to Russian art!

The Colosseum is the most popular landmark in Rome. But can you recognize this view? It is an amazing fact that Fyodor Matveev depicted the real landscape of the early 19th century! As you can see, he had a good understanding of perspective.

This Russian artist lived in Italy for 47 years and consequently made dozens of brilliant Italian landscape paintings. Colosseum takes a special place in his collection of artworks.

Here, the picture space calls to mind a theatrical stage. Left and right, like stage scenery, the composition is framed by nature. In the centre, you can see the ancient ruins of the Colosseum. The plants emphasize its dominant role in the painting by leading your eye to the building. In front of the Colosseum, the artist depicts a triumphal arch to increase the sense of picturesque antiquity. Meanwhile, tiny figures of people contrast the huge Colosseum. This detail makes us think of Rome’s infinite and immortal history and it’s temporary and fragile life.

Light and dark sides of a New Rome

Sylvester Shchedrin stood at the origins of the Russian romantic landscape. Although his life was short, he made numerous wonderful artworks. The artist’s most famous cycle of Italian landscape paintings is New Rome and The View of the Castle of the Holy Angel in particular.

Thanks to Shchedrin’s artworks, landscape paintings in Russia reached a new level and became an independent genre. By all means, Sylvester Schedrin is the best landscape painter in Russian art.

The View of the Castle of the Holy Angel was a typical scene for Schedrin as he lived very close to this monument.

In the foreground, you can see the everyday life of poor Romans by the Tiber. It is likely to be Trastevere. The old houses are crumbling beside the Tiber River. They appear neatly present and clean but they are too old to look decent. The houses are unlit by sunlight unlike the castle of the Holy Angel and St. Peter’s Basilica. Schedrin showed two opposite sides of Rome: the ordinary and the heavenly.

The people on the shore are busy with their usual jobs. However, Sylvester Schedrin draw peasants very carefully, adding energy and brightness to their images. It seems to be a cool morning due to the cold silver-gray tones of the sky.

Splashes of colors in Italian landscapes

Mikhail Lebedev was another brilliant Russian artist with peasant origins. Venetian painting styles had had a strong impact on his early artworks. Therefore, the main features of Lebedev’s Italian landscapes are the density and depth of color.

Aricia is a small town near lake Albano. In the background, Lebedev painted the church of Santa Maria del Asuncion. The artist combines architecture and the figure of a peasant girl in the landscape. However, she is more likely to be an amusing detail, enriching the painting with the bright color of her dress. The girl walks slowly along a path. Her red dress echoes the color of poppies growing around in the foreground. The landscape is built on a contrast of light and shadow, dense forest thickets and spots of light on the ground.

Certainly, everything in Italy was interesting for Lebedev – its vibrant nature, beautiful architecture and people in bright clothes were unusual for the Russian eye.

A new wave of Renaissance in Russian Art

Karl Bryullov was an outstanding Russian artist who traveled through Europe but he found true inspiration in Rome. Impressed with the Sistine Madonna by Raphael, Bryullov began learning more about Renaissance painters.

Later, Karl discovered that the 18th-century art lacked artistic taste and returned to the Renaissance as his life-giving source.

The Italian Morning represents this period of Bryullov’s life and became popular in Italy first, and then in Russia. Though this picture is not a landscape at all, it deserves to be noticed. The Imperial Society for the Encouragement of the Arts gifted the picture to empress Alexandra Feodorovna. Interestingly, artists could visit the empress’ boudoir to see the canvas.

Let’s take a closer look at the painting. The story is unremarkable: an Italian girl washing her face. Nonetheless, the canvas is magnetic: warm shades fill the picture with sunlight plunging spectators into the Italian provinces. This girl’s natural beauty, deprived of enhancements and affectation, is clearly visible.

The audience was so thrilled to see paintings related to Italy, that Bryullov created Italian Midday. Unfortunately, the second picture was a failure.

The Chernetsov brothers, Grigoriy and Nikifor, were famous Russian painters who traveled all over the world. The elder of them, Grigoriy Chernetsov, made a pompous but an unreal painting of St. Peter’s Square in Rome.

So, why is this painting unrealistic? If you visit Rome, you will never see the depicted view from the artist’s location! You can easily check it on Google Maps. Undoubtedly, St. Peter’s Square colonnades are large enough to cover the view of St. Peter’s Basilica. Also, the size of a fountain is smaller on canvas than in reality. Chernetsov painted real buildings but created his fictional perspective.

The artist located all objects in one image: the Dome St. Peter’s Basilica, collonades, a fountain, and a huge crowd. Surely, such perspective choice allows representing the greatness of the Pope’s power symbol.