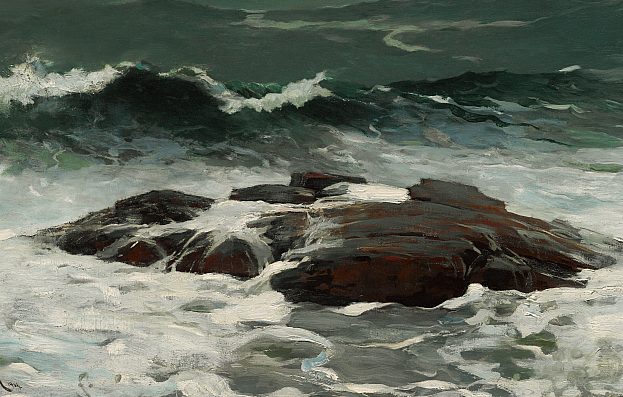 The crashing waves roar with deafening thunder, and the foamy spray flies with a quickening speed. Great gusts of wind blow the waters over the rocks and over the seashore. A storm of monstrous size lands aground and wreaks havoc upon humanity and nature. The drama and realism of this scene are captured in Summer Squall by Winslow Homer. Created in 1904, this blustery image has passed through many owners and now resides in the Clark Art Institute. Summer Squall is a masterpiece of Realism and captures the intensity of nature’s fury.

Realism was established in 1855 when Gustave Courbet built his Pavillon du Réalisme in Paris to exhibit his works. Courbet’s paintings focused on contemporary subjects and rejected the historical and fictional subjects commonly painted by other artists. Realist artists, like Courbet and Winslow Homer, believed that paintings should depict contemporary images gained through observation and direct experience. Winslow Homer followed these tenets and painted scenes he personally experienced. Summer Squall is one such example: it depicts Homer’s favorite fishing spot in Prouts Neck, Maine, during an approaching storm.

Winslow Homer lived in Boston and was the leading American Realist painter of the 19th and early 20th centuries. His experiences as an artist-reporter for Harper’s Weekly magazine during the American Civil War influenced his painting career. Homer’s paintings often deal with the themes of death, loss, and the instability of nature. Summer Squall explores the transformation of a favorite fishing spot when a great storm approaches. The spot changes from a tranquil place to a stormy scene. The location remains the same but the experience is completely different. One is calm and gentle, while the other is fierce and savage.

Despite the violent energy of the scene, Summer Squall has a rather limited color scheme. Winslow Homer expresses its violence through the predominant use of only four colors: blue, brown, gray, and white. The gray sky in the background complements the brown rocks in the foreground, while the white foam in the foreground complements the white tips in the midground. A small boat near the horizon adds a pop of brown color in a vacant area of blues and grays. It also adds a sense of scale and drama to the scene as it appears small and helpless in the churning distant waters.

As the waves toss the boat in the background they also crash against the rocks in the foreground. The repetition of layered waves adds a sense of rhythm and time. The small waves in the rear will soon become large waves in the front. The white tips near the boat will soon add to the blanket of foam near the rocks. Water and wind combine into a scene of turbulence and raw energy.

Winslow Homes effectively captures the drama, intensity, and unpredictability of nature in Summer Squall. It expresses both the human struggle against nature and the human appreciation for nature. Summer Squall is an image of savage beauty. It is a masterpiece of 19th-century American Realism.