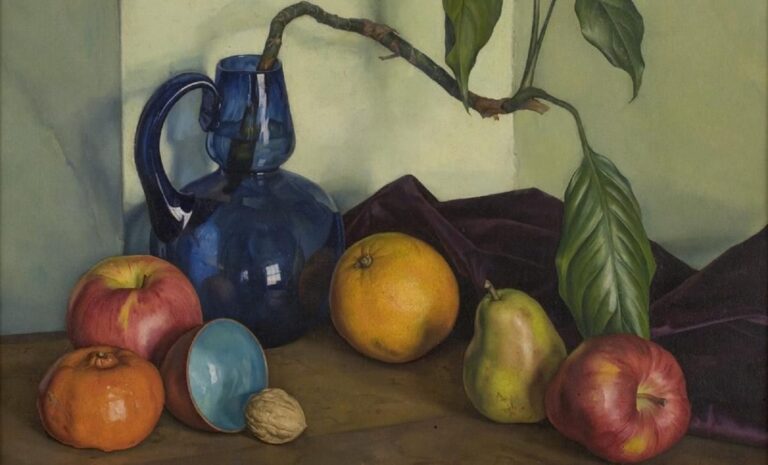 For some people, realism is defined by painting what they see. For Luigi Lucioni, it meant painting what he thought was there. Luigi Lucioni’s art was an imagined realism, a reflection of his own perception of reality that often appeared more vibrant than life itself.

Over more than 60 years of painting, Luigi Lucioni staunchly stuck to his own style. He emulated the Italian Renaissance while rejecting the 1920s realist movement, largely an opposite reaction to the avant-garde. This might sound impossible given the common verisimilitude of Renaissance paintings. However, Lucioni found his own niche amidst it all, somewhere between photographic and impressionistic style.

“I don’t think a photograph is realistic, you know. [People] mean to be very complimentary: ‘Oh it looks just like a photograph,’ so I just don’t say anything. But when a critic calls me photographic, then I get a little hurt. Because I don’t think I am photographic. But I am a realist, so I have to accept that limit.

Though his still lifes toe the line of representing objects as they appear in life, there are a host of elements that keep them separate from direct representations of reality. Firstly, Lucioni’s use of color – while muted to an extent – appears almost unburdened by shadow. Certainly, the light he depicts is directional, but it doesn’t detract from the vibrancy of the objects. The fabrics in Contrasting Textures and Shell Pattern are especially lively examples of this. The tones of any of his vegetables are as well; they appear ripest in the moments he captured them.

“My chief desire in art… is to paint not what I see but what I know and feel about objects and nature. I try to create objects that have an existence of their own, landscapes that have space, and solid forms and figure that have life and vitality. I love detail, but not for its own sake, but as a part of big masses and design.”

In some of his works, such as Indian Textures and Arrangement in Space, brush strokes are slightly more evident. However, this is only a result of certain objects’ more unusual textures. The metal vase in the Arrangement appears hammered, reflecting the light in a fashion that would be difficult to replicate without using broader strokes. Lucioni’s approach is somewhat impressionistic here, playing with the appearance of light almost more so than subject. A similar effect is evident in the two vessels flanking the composition of Indian Textures. These are presumably more rough-hewn and “unfinished” objects than one would find mass-produced.

Finally, Lucioni’s seamless definition of some surfaces makes them appear almost too real. In the aforementioned interview, he said of his still lifes:

” […] once I have set them down, [my intent is] to make them look as absolutely alive as possible. In Pewter Pitcher and Carnations, the flowers have finely outlined, individual petals that may as well be real. In addition, the smoothly rendered china cat and dog in Arrangement in Blue and White and White and Gold, respectively, appear almost too perfect.”

“It doesn’t make any difference to me, I do just what I want to do. It may not be stylish anymore to be photographic but, so what? You can only be yourself. That’s all that matters.”

After moving to the United States from Malnate, Italy, at age 10, he attended drawing school in New York City. Eventually, he joined a group of artists at the Tiffany Foundation in Oyster Bay, Long Island. Here he painted many still lifes (though not those shown here), largely unimpressed with the landscape:

“I had been painting out on Long Island, which is not a very attractive country to paint in, and then suddenly when I came up to Vermont I fell madly in love with the State because it reminded me a little bit of northern Italy…”

Lucioni first visited Vermont in 1930, eventually buying a farmhouse. From then on out, he divided his time between the Green Mountains and New York City. Soon after, he became known in the area for his landscapes. Vermont’s art community was small when he first went there, but it grew with and around him over the years.

Lucioni’s career spans decades and styles, indicative of a more or less solitary man who sought the answers to how far he could push his painting. Forever enraptured by the New England countryside and antiquated decoration, he found comfort and settled down, accepting his role as a “senior citizen” toward the end of his life. When he died in 1988 at age 87, he left behind an array of works spanning landscape, still life, and portraiture that deserves a place in art history’s spotlight today.