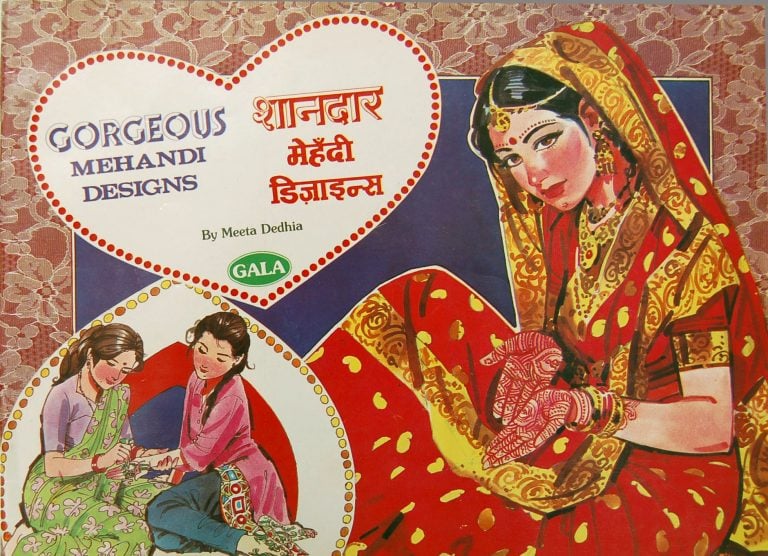 Book of patterns for young women (particularly brides) to apply to their hands and feet using henna (mehndi). © The Trustees of the British Museum. Detail.

Henna in Indian painting observes a symbolic as well as celebratory value. Henna or Mehndi is a significant cultural aspect of Indian culture. For anyone from India, henna reminds us of a beautiful bride with colored palms decked in traditional wear, all set to embark on a new phase of life. And yet, this culture-specific imagery associated with henna is not just quintessentially Indian but common to the whole subcontinent. Hence, Indian artists inevitably depicted its default association with common and royal women.

Henna is a tropical plant with the botanical name of Lawsonia Inermis. The dried leaves of henna are mashed to form a greenish-brown powder and mixed with water and other ingredients like lemon juice and eucalyptus oil. Women apply henna paste to palms and feet. However, henna tattoo, as the trending name suggests, is now made on arms, back, and other body parts, too.

Henna symbolizes fertility, restoration, and fearlessness in many myths and legends. Historically associated with Persian and Arabic cultures, it was during the Mughal rule in India that henna became a significant part of the Indian cultural narrative, just like how Mughal art influenced Pahari and miniature painting.

Henna in Indian paintings is notably observed between the 17th and 19th centuries, belonging to various miniature schools like Deccani, Rajasthani, and Company School, among others. The miniature art tradition of India, patronized by various rulers including the Mughals and subsequently by the British, included a strong representation of henna in the full range of its mythic and symbolic significance.

Let’s have a closer look at the use of henna in the paintings of some of these schools.

The Deccani style of miniature painting flourished in the late 16th century under the patronage of the Deccani sultanates. Deccani school is distinct in its use of rich and luminous colors, skillful blend of traditional and foreign art forms, elongated figures, and the generous use of gold and white. Considerably, it has also been influenced by Persian and Mughal art.

The use of henna is prominent in the Deccani school, portraying women from the royal family as well as in scenes of valor where it symbolizes bravery and courage.

In this painting, a young beautiful maiden, holding a parakeet in her hand, is a common convention in Deccani paintings. The young maiden has been identified as the daughter of the Mughal ruler, Aurangzeb. Her fingers are reddened with henna, which is a decorative gesture as well as a symbol of good luck and prosperity.

In the below painting, the lady riding the horse is Chand Bibi, the legendary queen of Ahmadnagar in the Deccan. The figure of Chand Bibi here is a symbol of valor, as she had courageously defended her fortress against the Mughals in the 16th century. Interestingly, the lower half of the horse has been colored red with henna, too.

The Rajasthani School of painting refers to the various styles of painting that were practiced in the princely states of what now constitutes Rajasthan, as well as parts of Madhya Pradesh. The myriad traditions of miniature painting in places such as Mewar, Bundi, Kota, Jaipur, and such in the period between the 16th to 19th centuries, all come under the Rajasthani school. The subjects of these paintings include royalty as well as other people from various strata of society.

Depiction of nature, women, and religious themes, as well as symbolic depictions of Hindu Lord Krishna and Goddess Radha, are some of the prominent themes.

In the below drawing, made in the early 18th century in Udaipur, Rajasthan depicts a woman holding a prince or princess. The woman appears to be a maid of a high rank. Her fingertips and the soles of her feet are adorned with henna. In present-day India henna, or Mehndi, has become a symbol of fashion and contemporary style, but in the princely states of 17th to 18th-century India, the paste of this traditional symbol of beauty epitomized femininity and grace.

A lady applies henna to her feet. Notice the idyllic and dreamy background, suggesting that the lady is lost in a state of trance. The act of applying henna becomes symbolic of the lady’s personal, feminine space far from the glare of society.

Company School refers to drawings and paintings that flourished under the patronage of the British East India Company in the 18th to early 20th centuries. Their attempt to capture the exotic, exuberant, and typically colorful image of India was for several reasons. The typical subjects of this school included paintings of landscapes, historical monuments, flora and fauna, images of the Indigenous rulers, Indian festivals, dance, music, as well as other kinds of cultural activities/events.

The first paintings under the Company School were created at Madras Presidency of South India. The style soon spread to other parts of India including Calcutta, Patna, Lucknow, Agra, Delhi, Punjab, etc. The use of henna is common in many Company School paintings, both as a symbol of feminine adornment and a spiritual — as well as a mystical — motif.

The theme of this watercolor painting from the early 19th century is from the Indian epic of Ramayana. The lady depicted sitting on a mat is Goddess Sita, Lord Rama’s wife. And the man dressed as an ascetic, visiting her in her forest-dwelling is Ravana (her abductor in the epic). In the painting, Sita’s hands are colored with henna. Henna here symbolizes feminine grace and also perhaps Sita’s status as a married woman.

The watercolor painting from the early 19th century depicts Goddess Ganga. The Goddess is seated on a lotus flower that rests on the back of a mythical aquatic creature. Beautifully adorned, her right hand is decorated with henna or Mehndi. This painting throws light on the spiritual and metaphysical significance of henna in Indian mythology and folklore.

The below painting depicts a Sikh officer and a woman. The large yellow turban on the officer’s head is a significant marker of his religious identity as a Sikh. The woman is dressed up in the traditional dress of Sikh women — a green tunic along with red trousers and a yellow shawl wrapped around her shoulders and head. The woman’s look is further embellished with long necklaces and hair-ear accessories. She is pointing her right hand toward the Sikh officer and her fingers are decorated with henna.

This early 19th-century watercolor painting depicts a female mendicant sitting on a white mat with her attendants.  Adorned with necklaces and bangles, their hair is disheveled and their hands are painted with henna.

This 19th-century watercolor painting depicts a dancing girl with three musicians. Decked in various ornaments and hair accessories, the dancing girl’s fingers are decorated with henna.