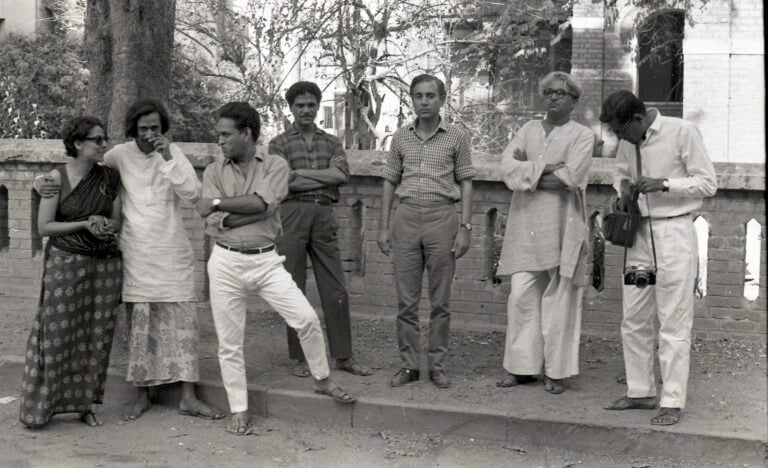 During the early and mid 20th century, Indian modern art had witnessed the germination of several artists’ collectives. Significantly, all had been short-lived. The common objective of these collectives was to push the boundaries of the traditional mechanism of artistic representation, as well as host an exhibition. The popular artist group’s list comprised the Progressive Artist Group, Calcutta Group, and Progressive Painters Association, among others. Among these, one of the most revolutionary and influential was Group 1890.

Group 1890’s narrative was, although short, the critical ideology. Like other groups, it amended the immediate concerns in the art community. Long intending, 12 modern artists had come together at a friend’s residence in Bhavnagar, Gujarat, India, on the 25th-26th of August 1962. Interestingly, the group derived its name from block No. 1890, the host home where they finally established the cohort. The group contained artists J. Swaminathan, Gulammohammed Sheikh, Himmat Shah, Jeram Patel, Ambadas, Jyoti Bhatt, Raghav Kaneria, Reddappa Naidu, Rajesh Mehra, Eric Bowen, S. G. Nikam, and Balkrishna Patel. Being a highly motivated member, Swaminathan also edited and published a magazine named Contra, driven by activism and radical discourse.

After establishment, Group 1890 held its debut and, unfortunately, its last exhibition on the 17th of July, 1963. It was held at Lalit Kala Akademi, Rabindra Bhavan, in Delhi. The show exhibited 10 pieces of artwork from each artist. Jawaharlal Nehru, who served as the first prime minister of India post-partition, inaugurated the exhibition. The then Mexican ambassador and poet, Octavio Paz, was instrumental in mentoring the collective, building a concrete relation with Swaminathan. Although none of the artworks were sold, the critical appreciation had materialized a shift in the perspective towards Indian modern art. Notably, the collective never exhibited again. Individual artists, however, eventually paved a new road of Indian modernism, with some leaving the country. Apart from Jeram Patel, Swaminathan, Ambadas, Jyoti Bhatt, all other members receded into oblivion at the time. The scenario has changed, though, following the recent retrospectives of Himmat Shah and Patel.

Swaminathan wrote the exhibition catalog with the help of Paz. The manifesto begins with:

“From its early beginnings in the vulgar naturalism of Raja Ravi Varma and the pastoral idealism of the Bengal School, down through the hybrid mannerisms resulting from the imposition of concepts evolved by successive movements in modern European art on classical miniature, and folk styles to the flight into ‘abstraction’ in the name of cosmopolitanism, tortured alternatively by memories of glorious past born out of a sense of futility in the face of a dynamic present and the urge to catch up with the times so as to merit recognition, modern Indian art, by and large, has been inhibited by the self-defeating purposiveness of its attempts at establishing an identity.

The self-conscious search for tradition between tradition and contemporaneity, between representation and abstraction, between communication and expression, lies at the root of all eclectism in art. To us, creative expression is not a search for but the unfolding of the personality.”

From the catalog of the Group 1890 exhibition in 1963, the manifesto ends with this concluding paragraph:

Art is neither conformity to reality nor a flight from it, it is a reality itself, a whole new world of experience, the threshold for the passage into the state of freedom.

Although Japanese weather varies greatly across the archipelago, the abundance of rain throughout the year remains a common phenomenon across Japan.