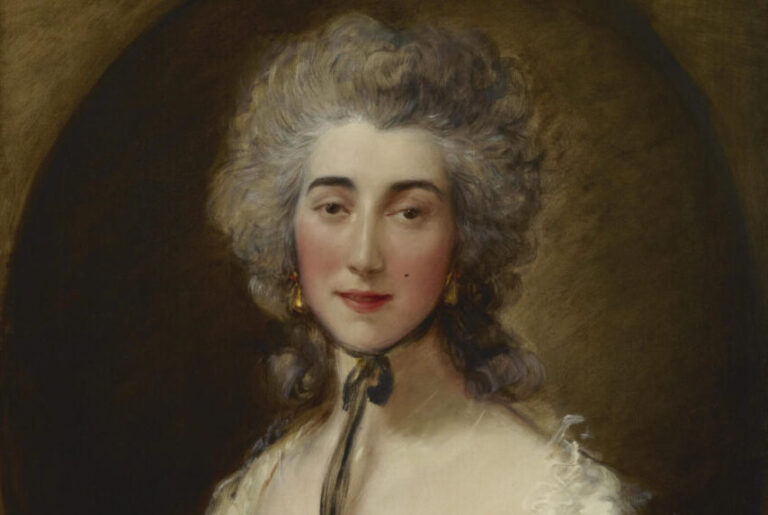 Our Dad Is an Artist: Thomas Gainsborough’s Daughters

The Frick Collection has an amazing ensemble of European masters. For example, works by Vermeer, Fragonard, and Goya grace its walls. Every room has its showpiece, and every showpiece has its story. Grace Dalrymple Elliott by Thomas Gainsborough is one such showpiece. It depicts a beautiful and stylish woman with a notorious reputation. Her story is filled with sex, scandal, and revolution.

Grace Dalrymple was born in Scotland in 1754, and shortly afterward was sent to a convent in France for education. In 1770 she returned home with education and refinement, that is to say, she was literate, fluent in French, and had acquired polite manners. Beauty and brains combined to make her an attractive future wife, therefore Grace Dalrymple married Dr. John Elliot in 1771. She was 17, and he was 35. The fact the groom was twice the bride’s age caused talk even in 18th century Scotland when young brides were the norm. The age difference was definitely a source of gossip.

Grace Dalrymple became Grace Dalrymple Elliot upon her marriage, but her surname was to outlast her relationship. Through mutual incompatibility, the marriage was not a success, and Grace met the dubious Lord Valentia in London in 1773. They had a brief but disastrous affair. Consequently, this ruined Grace’s reputation. Following this, her husband filed for divorce, and Lord Valentia abandoned her. In 1776 the divorce was approved, and Grace was now a divorcée, an irreparable social stigma in the 18th century. What was Grace Dalrymple Elliot to do? She became a celebrated courtesan.

Grace Dalrymple Elliot, known as “Dally the Tall,” led an exciting life heightened by love affairs with Lord Cholmondeley, and the Prince of Wales (future King George IV of England). She had an illegitimate child with the Prince, and possibly one with Lord Valentia. She lived in France for many years and was the lover of the Duc d’Orléans, cousin of King Louis XVI. Additionally, she socialized with Queen Marie Antoinette, had a friendship with Madame du Barry, and survived the French Revolution.

Thomas Gainsborough painted Grace Dalrymple Elliott in 1782 when Grace was 24 years old at the peak of her beauty and fame. The Prince of Wales commissioned the painting, and the Royal Academy in London displayed it the same year. However, it caused a stir among the public, and it was not well-received.

Grace has powdered hair, rouged cheeks, painted lips, white bosom, and sloping shoulders that were all fashionable in 18th century London and Paris. Her widow’s peak hairline gives her the heart-shaped face that was also fashionable at the time. However, it was the boldness of Grace’s eyes coupled with her notorious reputation that attracted public criticism. That is to say, her social infamy outweighed her physical charms.

Thomas Gainsborough was famous for painting fashionable women, and his Grace Dalrymple Elliott is no exception. The painting captures the famous sensuality and refinement that Grace exuded during her courtesan life in both London and Paris. She was the creator of her own destiny and lived a full and interesting life. Thomas Gainsborough captures this exciting woman in all her vibrancy. The painting is sexy, sophisticated, and sinful. Grace must have approved of it.