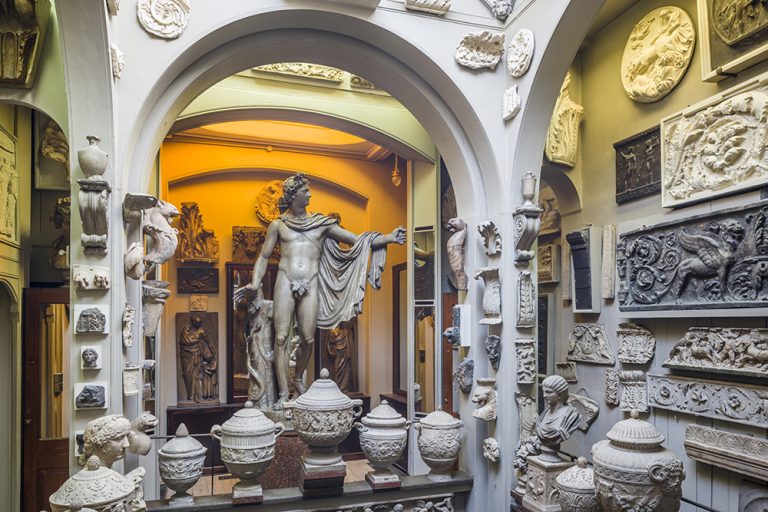 A unique museum that transports us into the past in a way not many museums can, Sir John Soane’s Museum is actually Soane’s house, preserved, unchanged as much as possible. It contains his extraordinary collection of antiquities, architectural drawings, sculptures, and paintings. You get two for one here: an outstanding collection and an experience curated by the collector himself.

Sir John Soane (1753–1837) was an English architect. On one hand, born into the profession as a son of a bricklayer, on the other, he still had to make a big jump from a bricklayer to an architect. However, Soane started early, at 15, learning the trade from George Dance the Younger, who was a founding member of the Royal Academy. Dance encouraged Soane to join the school where Soane proved to be a gifted student and quickly began to receive awards.

In 1778 his Grand Tour started, this trip certainly reinforced his Neoclassical inclinations. He came back to England in debt but had met many prospective clients. However, until mid-1780s he struggled for steady work, with many projects falling through. By 1788 his most famous commission came: The Bank of England. There isn’t much left of Soane’s work in the current building, but it helped him establish himself as an architect. His other renowned work, which can be seen as he designed it is Dulwich Picture Gallery.

Soane worked on numerous houses and official buildings throughout his career. That was not all though, among all this hectic work he continued his theoretical and research efforts. He was also an avid collector and all his passions came together in the house at 12 Lincoln’s Inn Fields.

In 1792, Soane bought a house at 12 Lincoln’s Inn Fields in London, later acquiring also neighboring properties. He extended the house to experiment with his architectural ideas, as well as to appropriately house his collection and library. His career at its peak, he was able to collect the best museum-quality pieces, such as the Sarcophagus of Seti I. This acquisition was even celebrated with a three-day party.

Soane collected nearly everything: sculptures, paintings (including J.M.W. Turner, Canaletto, and William Hogarth), architecture drawings, models, and books. Thankfully he stopped short of thimbles. His collection is worthy of the best museums in the world. Not surprisingly, Soane obtained a Private Act of Parliament in 1833 to bequeath the house and collection to the British Nation to be made into a museum of architecture. This was much to the displeasure of his son, for whom it meant a significantly smaller inheritance. Soane did this on purpose to spite the son he disliked.

One condition stipulated in the Act was that the house at 12 Lincoln’s Inn should be preserved unchanged as much as possible. This makes for a unique experience during a visit.

My first visit to Sir John Soane’s Museum was almost a decade ago. At that time it was possible to snag a spot at a late candle-lit tour, which made for a magical experience. That said, the museum still offers many “lates” with various themes, so keep an eye out for that.

The first interesting thing happens as you enter, because the museum is very crowded with objects large bags or backpacks are not allowed inside, to avoid unlucky accidents. Any smaller items must be placed in a clear plastic bag (I literally hear an airport announcer’s voice as I type this) that you can take with you. The staff are super nice and helpful, so you’ll have no issues.

You enter a relatively ordinary corridor, and then the madness starts, first off in the library. Given my passion for books, this was the room that I was most jealous of. However, the library in no way prepares you for what you are about to experience as soon as you step out of it. The mass of sculptures covers all walls from floor to ceiling. This is not your “let’s put one sculpture on a pedestal” type of museum.

This is a “bring-it-all-out” museum, which makes for a fantastic experience because you have to judge for yourself what you like, what catches your eye enough to spend some more time with. As the staff warns you at the entrance, the museum has almost no labels, it’s complete freedom in experiencing art. You roam at your own leisure and have the unique chance to see everything up close.

If you have a chance to visit the museum it is worth going during a weekday, since there will be fewer people and you can go back and forth to your heart’s content. The house is magical and made even better by the knowledgeable staff, happy to share with visitors. Ask them and they will show you things you’d never notice yourself.

The entry is free but to manage the visitor numbers you need to book a timed ticket on the website. If you cannot go to the museum, you can still explore parts of its collection online here and take a virtual tour here. You can also use the Bloomberg Connects app to explore more.